Two nuns have a message for Catholics angry about their ministry to immigrants: ‘We don’t have any intention of stopping.’ 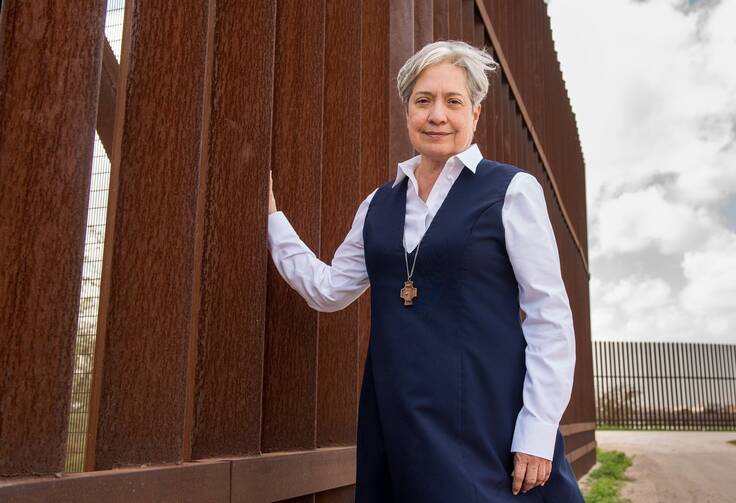 Sister Norma Pimentel, a member of the Missionaries of Jesus, is pictured along a border wall between Texas and Mexico in late February 2018. (CNS photo/Barbara Johnston, courtesy University of Notre Dame)

The angry emails and phone calls have been pouring in this week, and Donna Markham, O.P., the president and C.E.O. of Catholic Charities USA, has been among C.C.U.S.A. staff shocked by all the vitriol.

“We certainly have received hateful, hateful calls from people who say they are Catholics,” Sister Markham said, “and speaking to us in language that I would never repeat and threatening our agencies. It’s a very sad situation.”

The unpleasantness followed quickly in the wake of press releases and news reports about a Freedom of Information Act lawsuit filed by the political action groups Judicial Watch and CatholicVote. The suit demands records of communication between the U.S. Departments of Homeland Security and of Health and Human Services “with Catholic organizations near the Texas border that were aiding illegal immigrants.”

“We certainly have received hateful, hateful calls from people who say they are Catholics and speaking to us in language that I would never repeat and threatening our agencies. It’s a very sad situation.”

“I’m mystified by any group that would call itself Catholic that is attacking the Catholic Church and its ministry,” Sister Markham said. “Our work with those who are poor takes its impetus, really, from our Catholic faith, and the Gospel mandate that calls all of us for over 2,000 years, especially as Catholics, to care for those who are vulnerable, homeless, hungry and suffering.

“It’s Matthew 25,” Sister Markham added. “And Catholic Charities in particular has been doing this since 1910. This is really our identity, and we don’t have any intention of stopping this ministry.

“Our work is humanitarian,” she added. “It is not political. It is grounded in our faith.”

Fueling the furious phone calls have been recent coverage and commentary from Fox News and other media, which purport that C.C.U.S.A. and other faith-based humanitarian groups encourage migration to the United States by providing aid at the border. The attacks include commentary from a Texas member of Congress who charged that C.C.U.S.A., which he called the “biggest villain of them all,” has been engaged in what amounts to human trafficking. “Nonprofit groups operating a secretive, taxpayer-funded and likely illegal operation must be honest and transparent about their role in exacerbating the border crisis,” Texas Republican Lance Gooden told Fox News Digital.

Norma Pimentel, M.J., the executive director of Catholic Charities of the Rio Grande Valley in Brownsville, Tex., has become a primary focus of the ire of anti-migrant forces. “The claims made by the congressman show a lack of knowledge and understanding on his part of immigration law and our work here on the U.S.-Mexico border,” Sister Pimentel countered in an email to America, adding, “I invite the congressman to come here and visit with me and see what we do firsthand.”

The unassuming entrance to the Rio Grande office’s Humanitarian Respite Center in McAllen, Tex., is now a regular backdrop for anti-immigrant and right-wing commentators intent on associating Catholic Charities’ assistance to migrants with human-smuggling or even a murky conspiracy to alter political realities in the United States with immigrants from Latin America.

Sister Donna Markham: “I’m mystified by any group that would call itself Catholic that is attacking the Catholic Church and its ministry.”

“It is outrageous to think that our work is driving the immigration numbers,” Sister Pimentel said. “Do you really think that people are uprooting themselves, putting themselves in danger as they undertake a difficult journey just so that they can come to our respite center to take a bath and have a meal or sleep on a mat?

“They are leaving dire circumstances back in their home countries,” she said, “risking everything to come here with the hope that they can find a safe place to raise their families. Government policy determines whether they enter or not.”

“Restoring human dignity,” Sister Pimentel said, “that is what we are doing. Once the federal government determines the immigrant families can enter this country, we simply offer humanitarian assistance in their time of crisis.”

As wild accusations of people-smuggling circulate on social media, Sister Markham explained that Catholic Charities “does not enter into this situation until an individual or family has been processed” through the Department of Homeland Security.

Sister Pimentel: “Restoring human dignity; that is what we are doing. Once the government determines the immigrant families can enter this country, we simply offer humanitarian assistance in their time of crisis.”

“When they’re released [by Border Patrol], that’s when Catholic Charities enters into the humanitarian work,” she said. “The government agencies often will bring the migrants to our facilities, or to the Lutherans’ facilities or to the Jewish facilities, because those faith communities are also involved in this humanitarian work.”

Allegations that assisting migrants represents a profit-making opportunity are part of the misinformation C.C.U.S.A. has been forced to contend with. Sister Markham tried to set the record straight: “Most of the work that we do is sponsored through private donations. And some small part of that is reimbursement by federal grants back to us after we do get [asylum applicants] settled.

“We have to raise some money, help them get where they’re going, and then the government reimburses a certain portion of their food, their shelter, [and a] minimum amount of their travel.”

Sister Markham is at a loss to explain the flare-up of attention now on work that C.C.U.S.A. has been associated with for decades. C.C.U.S.A.’s outreach on behalf of migrants and refugees has been a consistent component of its historical social service efforts, she explained. “We’ve certainly been respected by various administrations on both sides of the aisle [for our work], so this is puzzling to me.

“I think we have to acknowledge that our U.S. immigration system is really broken, and I think that this situation at the border is, quite frankly, very, very disturbing, and we need to fix it,” she said. “I wish that instead of taking shots at the people that have been affected by it, that we would try to direct our energies toward fixing it.

“No administration has been able to really accomplish that to date…. All of us are trying to do the best we can within a broken system.”

Sister Pimentel: “Do you really think that people are uprooting themselves, putting themselves in danger just so that they can come to our respite center to take a bath and have a meal or sleep on a mat?”

In 2021 a record 1.9 million arrests at the border were made by the Border Patrol. Many of those arrested—27 percent—were responsible for multiple crossing attempts and about one million of those detained were immediately expelled, but 400,000 others, primarily unaccompanied minors and families, have been permitted to stay in the United States while their asylum claims are processed.

A border where thousands arrive year upon year exhausted, hungry and increasingly threatened by criminal gangs makes a poor location to attempt to “fix” the U.S. immigration system, according to Sister Markham. “It has to be a much larger endeavor, and I know that various administrations have tried, and continue to try, but certainly in the short term, I would hope that Congress would pass the American Dream and Promise Act at least to establish a path to citizenship for the migrant youth and [Temporary Protected Status] holders, at least to get that part regulated.”

A spokesperson for the U.S. Conference of Catholic Bishops said that the social service efforts of C.C.U.S.A. are undertaken “in tandem with the church’s longstanding call for comprehensive immigration reform.”

“The Catholic Church teaches that we must welcome the newcomer and accompany them, while also respecting the right and responsibility of our country to control our borders,” the spokesperson said. “The work being done by the church’s social service ministries at the U.S.-Mexico border and elsewhere upholds the dignity of human life and is carried out in accordance with the law and in close cooperation with many entities of good will including local, state and federal governments.”

According to Sister Pimentel, the Rio Grande Catholic Charities office works in close collaboration with local and federal law enforcement to “address the needs of our community, especially in relation to immigrants.”

She added, “I greatly respect the fine men and women in law enforcement whom we work with. They keep our border safe, and together with many others, we all do our part to uphold the dignity and respect of life, especially the most vulnerable in our community who are hurting.”

The families and individuals who come to the center, frequently dropped off by Border Patrol agents themselves, have the opportunity there to contact family members and sponsors so that they can make their travel arrangements. “While they wait for confirmation from their families, they have an opportunity to shower, get clean clothing, eat and rest,” Sister Norma said.

“As a Catholic, I firmly believe that God desires that we care for our brothers and sisters in need, those who are suffering,” she said. “My focus remains unshaken. I refuse to be distracted from helping others. I am consoled and inspired by those who do support the work we do, who care for those who suffer and who stand up and protect and defend those in need.

“There is nothing wrong with feeding the hungry and providing care for those here in our country,” Sister Pimentel said. “We do it because the Lord asks us to.”

Listen Next: What Sister Norma Pimentel wants you to know about what is happening at the southern U.S. border

More: Immigration / US Church / US Politics