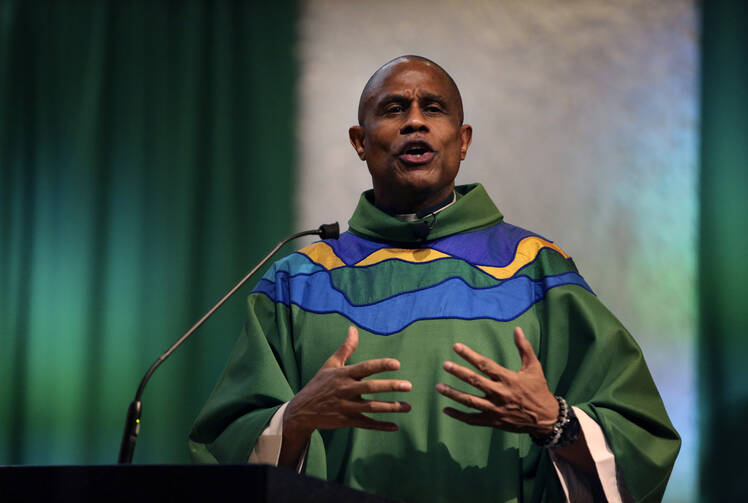 The Rev. Bryan Massingale, who sometimes preaches at St. Charles, pursues his ministry in ways that echo both Martin Luthers.

Like King, Father Massingale decries the scourge of racial inequality in the United States. As a professor at Fordham University, he teaches African American religious approaches to ethics.

Like the German Martin Luther, Father Massingale is often at odds with official Catholic teaching—he supports the ordination of women and making celibacy optional for Catholic clergy. And, as a gay man, he vocally disagrees with the church’s doctrine on same-sex relations, instead advocating for full inclusion of L.G.B.T.Q. Catholics within the church.

In his homily on a recent Sunday, Father Massingale envisioned a world “where the dignity of every person is respected and protected, where everyone is loved.”

The Vatican holds that gay and lesbian people should be treated with dignity and respect, but that gay sex is “intrinsically disordered” and sinful.

In his homily on a recent Sunday, Father Massingale—who became public about being gay in 2019—envisioned a world “where the dignity of every person is respected and protected, where everyone is loved.”

But the message of equality and tolerance is one “that is resisted even within our own faith household,” he added. “Preach!” a worshiper shouted in response.

Father Massingale was born in 1957 in Milwaukee. His mother was a school secretary and his father a factory worker whose family migrated from Mississippi to escape racial segregation.

“The first parishioner to greet me at the door said to me: ‘Father, you being here is the worst mistake the archbishop could have made. People will never accept you.’”

But even in Wisconsin, racism was common. Father Massingale said his father couldn’t work as a carpenter because of a color bar preventing African Americans from joining the carpenters’ union.

The Massingales also experienced racism when they moved to Milwaukee’s outskirts and ventured to a predominately white parish.

“This would not be a very comfortable parish for you to be a part of,” he recalled the parish priest saying. Thereafter, the family commuted to a predominantly Black Catholic church.

Father Massingale recalled another incident, as a newly ordained priest, after celebrating his first Mass at a predominantly white church.

“The first parishioner to greet me at the door said to me: ‘Father, you being here is the worst mistake the archbishop could have made. People will never accept you.’”

Father Massingale says he considered leaving the Catholic Church, but decided he was needed.

Father Massingale says he considered leaving the Catholic Church, but decided he was needed.

“I’m not going to let the church’s racism rob me of my relationship with God,” he said. “I see it as my mission to make the church what it says it is: more universal and the institution that I believe Jesus wants it to be.”

For Father Massingale, racism within the U.S. Catholic Church is a reason for the exodus of some Black Catholics; he says the church is not doing enough to tackle racism within its ranks and in broader society.

“I realized that no matter what the church said, God loved me and accepted me as a Black gay man.”

The U.S. Catholic Church has had a checkered history with race. Some of its institutions, such as Georgetown University, were involved in the slave trade, and it has struggled to recruit African American priests.

Conversely, Catholic schools were among the first to desegregate and some government officials who opposed racial integration were excommunicated.

In 2018, U.S. bishops issued a pastoral letter decrying “the persistence of the evil of racism,” but Father Massingale was disappointed.

“The phrase ‘white nationalism’ is not stated in that document; it doesn’t talk about the Black Lives Matter movement,” he said. “The problem with the church’s teachings on racism is that they are written in a way that is calculated not to disturb white people.”

At Fordham, a Jesuit university, Father Massingale teaches a class on homosexuality and Christian ethics, using biblical texts to challenge church teaching on same-sex relations. He said he came to terms with his own sexuality at 22, upon reflecting on the book of Isaiah.

Father Massingale has a different vision of the church: one where Catholics enjoy the same privileges regardless of sexual orientation.

“I realized that no matter what the church said, God loved me and accepted me as a Black gay man,” he said.

His ordination in 1983 came in the early years of the HIV/AIDS epidemic that disproportionately affected gay men and Black Americans. Among his first funerals as a priest was that of a gay man whose family wanted no mention of his sexuality or the disease.

“They should have been able to turn to their church in their time of grief,” Father Massingale said. “Yet they couldn’t because that stigma existed in great measure because of how many ministers were speaking about homosexuality and AIDS as being a punishment for sin.”

Pope Francis has called for compassionate pastoral care for L.G.B.T.Q. Catholics. However, he has described homosexuality among the clergy as worrisome, and Vatican law remains clear: same-sex unions cannot be blessed within the church. Some dioceses have fired openly L.G.B.T.Q. employees.

Father Massingale has a different vision of the church: one where Catholics enjoy the same privileges regardless of sexual orientation.

“I think that one can express one’s sexuality in a way that is responsible, committed, life giving and an experience of joy.”

“I think that one can express one’s sexuality in a way that is responsible, committed, life giving and an experience of joy,” he said.

Father Massingale has received recognition for his advocacy from like-minded organizations such as FutureChurch, which says priests should be allowed to marry and women should have more leadership roles within the church.

“He is one of the most prophetic, compelling, inspiring, transforming leaders in the Catholic Church,” said Deborah Rose-Milavec, the organization’s co-director. “When he speaks, you know very deep truth is being spoken.”

Along with his many admirers, Father Massingale has some vehement critics, such as the Catholic news outlet Church Militant, which depicts his L.G.B.T.Q. advocacy as sinful.

At Fordham, Father Massingale is well-respected by colleagues, and was honored by the university with a prestigious endowed chair. To the extent he has any critics among the Fordham faculty, they tend to keep their misgivings out of the public sphere.

He says he receives many messages of hope and support, but becoming public about his sexuality has come at a cost.

“I have lost some priest friends who find it difficult to be too closely associated with me because if they’re friends with me, ‘what will people say about them?’” he said.

Father Massingale remains optimistic about gradual change in the Catholic Church because of Pope Francis and recent signals from bishops in Europe who expressed a desire for changes, including blessing same-sex unions.

“My dream wedding would be either two men or two women standing before the church; marrying each other as an act of faith and I can be there as the official witness to say: “Yes, this is of God,” he said after a recent class at Fordham. “If they were Black, that would be wonderful.”

Kwasi Gyamfi Asiedu — The Associated Press
Show Comments ()
Join the conversation: Login or create an account
Before you can comment, you need to update your profile to include your first and last name, as required in our comments policy. Then reload this page and you'll be set up for commenting. Update your profile