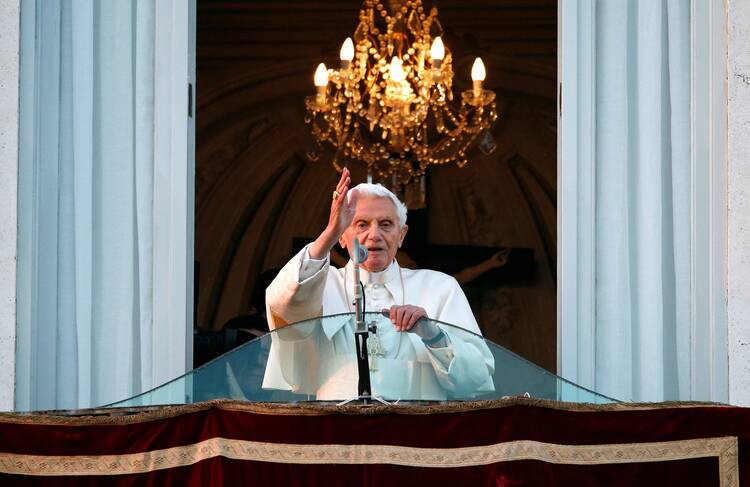 Pope Benedict XVI blesses the faithful from the balcony of his summer residence on the day of his resignation in Castel Gandolfo, Italy, on Feb. 28, 2013. (CNS photo/Tony Gentile, Reuters)

Bonn, Germany (KNA) — A broad debate has erupted in Germany after former Pope Benedict XVI corrected a central statement he made on the Munich abuse report presented last week.

On Monday, he admitted that, contrary to earlier statements, he had taken part in an important meeting in January 1980. In his 82-page initial statement on the report, Benedict XVI had denied this in three places.

The error was “the result of an oversight in the editing” of the statement, Benedict said on Monday. He was “very sorry” for this and apologized.

The meeting in question had addressed issues including taking in a priest, who has been named only as H. and who had committed sexual offenses in the diocese of Essen and had later been accused of numerous further cases of abuse. However, this context was not the subject of the meeting in detail, the former pope’s new statement said on Monday.

Bishop Rudolf Voderholzer of Regensburg defended Benedict XVI and said the church and the former pope were being made scapegoats and lightning rods for a failure in society as a whole.

The bishop of Passau, Stefan Oster, said he was puzzled about the background to the statements of the pope emeritus. “I naturally ask myself how this 82-page statement bearing his signature came about,” he said. Personally, he had come to know Benedict XVI as a fundamentally honest person who also took his episcopal motto of wanting to be a “co-worker of the truth” very seriously.

At the same time, Oster called for a further comprehensive reappraisal. “Of course, nothing can justify such a human and institutional failure. Above all that so little attention was paid to the victims in the past.” However, the church has been working for many years on far-reaching measures to reappraise everything and to prevent it in the future.

Bishop Rudolf Voderholzer of Regensburg defended Benedict XVI and said the church and the former pope were being made scapegoats and lightning rods for a failure in society as a whole.

Compared to the reappraisal of abuse in schools or in the field of sports, the church was “miles ahead,” Voderholzer said. He voiced suspicion that the issue of abuse was being instrumentalized to change the church and demand reforms, for example in the Synodal Path project. The outrage over the abuse was “the fire on which the soup of the Synodal Path is being cooked,” he said.

Bishop Peter Kohlgraf of Mainz said many former bishops had lost their role model function for him. “They can no longer be my role models,” he wrote, referring among others to Cardinal Joachim Meisner of Cologne, who died in 2017. “It certainly shakes my faith when I too am criticized today for the evident failure of church officials.”

“The fact that even a former pope is being accused of serious misconduct here is hard for many believers to grasp and bear,” said Stephan Ackermann, the bishop of Trier.

The bishop of Trier, Stephan Ackermann, who is also the spokesman on abuse issues for the German Bishops’ Conference, expressed shock at the accusations against Benedict XVI. “The fact that even a former pope is being accused of serious misconduct here is hard for many believers to grasp and bear,” he said.

The Central Committee of German Catholics (ZdK) accused Benedict XVI of adopting “salami tactics” in correcting his statements. “It is simply unfortunate that, contrary to his written statement, he merely admits something that can no longer be denied,” said Irme Stetter-Karp, the president of the organization that represents Catholic laypeople.

Members of the Catholic reform movement “Maria 2.0” called on the former pope to drop his papal name. They said he had “downright brazenly trivialized” the sexual abuse of minors.

The Catholic initiative “Wir sind Kirche” (We are the Church) demanded a personal confession of guilt from Benedict XVI. The spokesman for the victims’ group Eckiger Tisch (Non-Round Table), Matthias Katsch, said Ratzinger only ever admitted what could no longer be denied. Instead of taking responsibility, the former pope shifted the blame onto others, he said.

The former cardinal of Munich, 93-year-old Friedrich Wetter, accepted personal responsibility for cases of abuse in the Catholic Church.

Meanwhile, the former cardinal of Munich, 93-year-old Friedrich Wetter, accepted personal responsibility for cases of abuse in the Catholic Church. In a statement published on Tuesday in response to the Munich abuse report, he admitted he had failed before 2010 to confront in depth the grave and destructive impact of abuse on children and young people.

Wetter explicitly apologized for his “wrong decision” in the prominent abuse case of the priest H., which the Munich abuse report devotes more than 350 pages to. H. should no longer have been employed in pastoral care, he said.

In response to the latest revelations, the German Bishops’ Conference also released a new statement on Tuesday on the reappraisal of abuse. The new findings had “deeply shaken” them, the bishops wrote. They added: “We feel the considerable loss of confidence and understand the great mistrust that is shown to us bishops by society and by the faithful.”

At the same time, they pledged to continue to “reappraise our own guilt—independently and free of false considerations,” and to take the necessary consequences.

They said the reappraisal not only brought to light the shameful behavior of the offenders but also showed “how church leaders have behaved inappropriately and wrongly. Personal responsibility—also of former leaders—must not be diminished.”