Does the March for Life have a white supremacy problem? 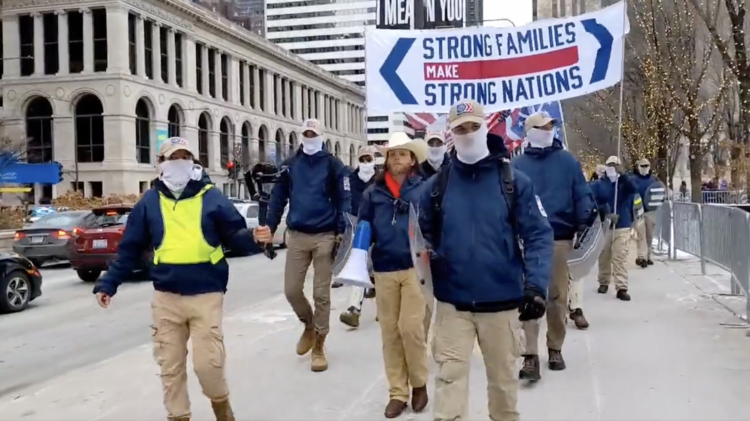 Members of  Patriot Front—a breakaway group that emerged out of a national neo-Nazi organization, Vanguard America—at the March for Life in Chicago (Twitter screenshot from @chifreemedia)

Destiny Herndon-De La Rosa did not understand what was happening at first when a young man in khaki pants and a camo jacket approached a meetup she was joining during the annual March for Life on Jan. 21. Helmeted, his identity obscured by the face-covering balaclava—de rigueur among U.S. extremists of all stripes—the young man launched a one-sided confrontation with the group.

“F*** you guys,” he told members of Pro-Black Pro-Life and Democrats for Life contingents gathered for the event. “In 10 years, when the civil war breaks out, you guys are done.”

“We were so baffled,” said Cherilyn Holloway, the founder of Pro-Black Pro-Life.

“How beautiful would it have been, if when these white supremacist groups come out here, organizing this little clump over on the sidewalk, if we were all screaming at them, ‘Get out! Get out! Racism has no place here!’”

Ms. Herndon-De La Rosa, the founder and president of New Wave Feminists, believed at first that the young man emerged from a group of counter-demonstrators nearby. “We thought he meant pro-lifers, like he was some pro-abortion activist or something…. We just said, ‘Well, God bless you.’”

Tracked that day by a CNN news crew, Ms. Herndon-De La Rosa had been on her best behavior—“a calm, joyful, wonderful, pro-life feminist.” But when she slowly realized that the man’s comments had been directed at Pro-Black Pro-Life members, she forgot all about CNN and pulled out her bullhorn. “F*** Nazis!” she shouted at front members gathered nearby.

She felt bad about that later, she said, before deciding that in the end her gut reaction was authentic and appropriate. “How beautiful would it have been, if when these white supremacist groups come out here, organizing this little clump over on the sidewalk, if we were all screaming at them, ‘Get out! Get out! Racism has no place here!,’” she said.

Brian Paulson, S.J., the president of the Jesuit Conference of Canada and the United States, called the presence of Patriot Front—a breakaway group that emerged out of a national neo-Nazi organization, Vanguard America—at the march “deeply offensive” in a statement on Jan. 24. Father Paulson delivered the homily at the Ignatian Family Mass for Life at St. Aloysius Church in Washington on Jan. 21.

“As Catholics,” Father Paulson said, “our belief in each person’s God-given dignity requires us to work for the legal protection of unborn children and for public policies that support every expectant parent, especially those who fear they will not be able to provide for their child. This commitment to upholding human dignity also leads us to stand up against racism in our hearts and in our structures.”

Most marchers had no idea who or what Patriot Front was when the group made its unannounced and uninvited appearance at the March for Life.

Like most of the other marchers, Ms. Herndon-De La Rosa had no idea who or what Patriot Front was when the group made its unannounced and uninvited appearance at the March for Life. This was the third time Patriot Front crashed the event, according to a statement on one of its social media accounts. The group did not respond to a request for comment about its interactions with pro-lifers in Washington or what it hoped to achieve by “joining” the March for Life.

The optics of the front’s presence were obviously not great, said Ms. Holloway, founder of Pro-Black Pro-Life, and were quickly put to use by pro-choice groups and members of the media to discredit the March for Life and the pro-life movement, she said. “There’s a picture that pro-choice people are passing around saying, ‘Look who’s leading the march.’”

Ms. Herndon-De La Rosa agreed that although Patriot Front may not have been able to completely hijack the march, it did hijack media coverage. “I don’t think they care at all about the pro-life issue,” she said. Noting the Patriot Front member’s reference to an upcoming civil war, she added, “This is some helter-skelter stuff that’s going on, where they’re actively trying to start a race war.”

She pointed out that the group had to be protected by police “because people [knew] that we [didn’t] want them there.”

“They were off on the side the whole time,” she said. “They were never included in the march. But the way the media is portraying it right now is that they came in and marched alongside us, which is just completely factually inaccurate.”

That outcome is especially frustrating, said Ms. Holloway, given the support among many white extremists for abortion rights, which in their minds has a welcome, disproportionate impact on the U.S. Black community. She suggested that even as pro-choice activists attempt to weaponize Patriot Front’s appearance at pro-life events, contemporary Nazis share the same eugenic sentiments as Planned Parenthood founder Margaret Sanger. “They’re just now admitting that Margaret Sanger was a racist, something we’ve known forever,” said Ms. Holloway. “And they want us to believe that that’s not their stance anymore.”

The problem of optics and perceptions remain. The pro-life movement is wrestling with a key problem: “How do we become inclusive without diluting our message?”

For her part, Ms. Holloway is satisfied that few marchers, if any, shared the sentiments of their uninvited guests, and she acknowledged that there may be little that march organizers can do to stop a group like Patriot Front from interfering at upcoming events. She noted that Pro-Black Pro-Life is, after all, similarly reliant on First Amendment privileges to get its message out on U.S. streets.

The march was significantly delayed as leadership tried to dislodge Patriot Front members who initially had positioned themselves at the front of the march. In the end, the group walked parallel to the march in a phalanx surrounded by Washington police.

Asked to comment on the incident, March for Life responded with a statement from its president Jeanne Mancini: “March for Life promotes the beauty, dignity, and worth of every human life by working to end the violence of abortion,” she said.

“We condemn any organization that seeks to exclude a person or group of people based on the color of their skin or any other characteristic. Such exclusion runs counter to our mission which recognizes that all human lives are equal from the moment of conception: equality begins in the womb,” the statement continued.

Ms. Holloway appreciated the statement but said that she believes that march organizers would do better to issue stronger disavowals beforehand in anticipation of attempts by white supremacists to co-opt its message. They might also consider how to make the effort more obviously broadbased than it has appeared to be in the past, she added.

There is a reason that the front chose the march to make its wildcat appearance “and not an M.L.K. march,” Ms. Holloway said with a laugh. They “came here because it’s predominantly white people.” The march felt “safe” for them.

The March for Life was significantly delayed as leadership tried to dislodge Patriot Front members who initially had positioned themselves at the front of the march.

“It is encouraging to see that Jeanne Mancini strongly denounced the Patriot Front and that some protesters on the ground shouted at them to leave; this response should be universal any time they show up at a pro-life event,” Robert Christian, the co-host of the Whole Life Rising podcast and editor of Millennial, said in a direct message.

But, he warned, “it is clear that some in the pro-life movement are comfortable with—or even promoting—anti-democratic efforts out of partisan allegiance or a recent affinity for populist nationalism.”

Condemning neo-Nazis and outright fascists is comparably easy for the pro-life movement, he argued, “but opposing voter suppression and threats to the integrity of our elections should likewise be seen as necessary and linked to protecting life.”

Ms. Holloway knows “the pro-life movement has been thinking about its demographics for a long time” and adds that the march itself is far more representative of U.S. demographics than critics believe. But the problem of optics and perceptions remain. The movement, she said, is wrestling with a key problem: “How do we become inclusive without diluting our message?”

For march organizers, she said, “the message is the unborn.”

“For groups like mine, the message is more of a whole life, consistent life ethic,” Ms. Holloway said. “We are trying to reach the Black community to impact them in developing a culture that values life at all stages, so our message isn’t just a pro-birth message. It is a message about life in general having value.

Condemning neo-Nazis is easy, “but opposing voter suppression and threats to the integrity of our elections should likewise be seen as necessary and linked to protecting life.”

“The march being its own entity, they have their own mission statement and their own vision.”

And sometimes, she suggested, that has meant that march organizers “have speakers and groups of people that all look the same”—a perception issue that the U.S. Black community has been well aware of, she said.

Patriot Front similarly crashed a March for Life event in Chicago on Jan. 8. David Goldenberg of the Anti-Defamation League told The Chicago Sun-Times that the group often “takes advantage” of events like the Loop pro-life rally. They may pretend to be participants, he said, or may try to commandeer an event entirely, “taking advantage of things that are already put together...to make it appear there are more who support their racist, anti-Semitic, hateful views” than there actually are.

Patriot Front has been particularly active recently, he said, but the anniversary of the Jan. 6 insurrection in Washington has “emboldened” many white supremacist groups in general to seek out events where they may find people with “overlapping views” as recruitment opportunities.

Ms. Holloway said that having “receipts” in the form of pre-emptive statements from the organizers of the march and participating groups demonstrating that those “overlapping views” are not welcome at the March for Life will be essential in discouraging future incursions from white supremacist groups. “That would be a bold statement,” she said, and would allow march organizers to play offense, not defense next year as images of the event are inevitably circulated.

Ms. Herndon-De La Rosa likewise vows next year will be different. In 2023, New Wave Feminists and Pro-Black Pro-Life “will happily organize people to stand around with bull horns and tell them to get out.”