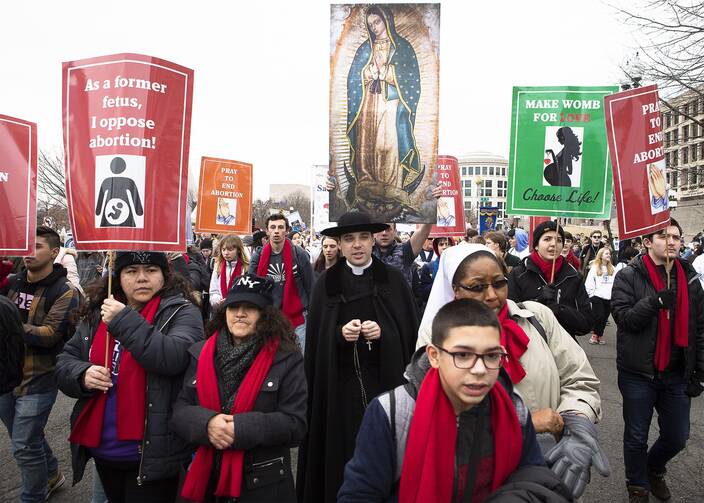 People walk up Constitution Avenue headed toward the U.S. Supreme Court while participating in the 47th annual March for Life in Washington Jan. 24, 2020. (CNS photo/Tyler Orsburn)

NEW HAVEN, Conn. (CNS) -- A new Knights of Columbus/Marist Poll shows that 71% of Americans support legal limits on abortion and a majority of Americans -- 54% -- oppose taxpayer funding of abortion.

In addition, the poll found that 81% of Americans believe laws can protect both the mother and her unborn child.

Results of the survey conducted by the Marist Poll were released Jan. 20, a day ahead of the 49th annual March for Life in Washington marking the anniversary of the U.S. Supreme Court’s Roe v. Wade decision legalizing abortion nationwide.

For more than a decade the survey has been commissioned annually by Knights of Columbus, based in New Haven.

“When it comes to the direction of government policy, there has been consistency and consensus in American public opinion on the issue of abortion over the decades,” said Barbara Carvalho, director of the Marist Poll.

The poll found that 81% of Americans believe laws can protect both the mother and her unborn child.

“As we await a decision in the Supreme Court case Dobbs v. Jackson Women’s Health Organization, our polling continues to show that over 60% of Americans reject the central holding of Roe v. Wade, and want to return the decision to the states or make abortion illegal,” Supreme Knight Patrick Kelly said.

“Roe v. Wade was wrong when it was decided, and its legacy is the tragic destruction of more than 60 million unborn lives and countless wounded women,” he added. “The time has come for America to turn the page on Roe.”

On Dec. 1, the high court heard oral arguments in Dobbs v. Jackson Women’s Health Care concerning a Mississippi law banning most abortions after 15 weeks. The case is seen by many as a direct challenge to Roe.

Court watchers speculate the justices could decide to overturn Roe or at the very least severely curtail it with their decision on this case. The ruling is expected in June or early July.

The Marist Poll results also show that Americans oppose policies “that divert tax dollars to pay for abortion here and abroad,” Kelly said. “This is especially relevant as the bipartisan Hyde Amendment prohibiting taxpayer funding of abortion is in danger.”

Though Hyde and other long-standing, bipartisan pro-life provisions in appropriations bills have for years enjoyed bipartisan support, a number of Democrats in the House and Senate now claim the provisions “discriminate against low-income women who depend on Medicaid and other federal funding for health care,” according to an Oct. 6 article in The Hill, a daily news outlet.

The provisions place “a disproportionate burden on women of color, especially Black and Hispanic women,” the article said.

“Roe v. Wade was wrong when it was decided, and its legacy is the tragic destruction of more than 60 million unborn lives and countless wounded women. The time has come for America to turn the page on Roe.”

Hyde first became law in 1976 to prohibit federal funds appropriated through the Labor Department, the Health and Human Services Department and related agencies from being used to cover abortion or fund health plans that cover abortion except in cases of rape, incest or when the life of the woman would be endangered.

The Helms Amendment has prohibited using U.S. taxpayer funds to directly pay for abortions in other countries since 1973.

The Weldon Amendment has been included in the annual appropriation for Health and Human Services since 2005. It allows health care providers as well as insurance plans to refuse to provide abortions, pay for them or refer women to abortion clinics.

The U.S. House in October passed several spending bills without the pro-life provisions; similar legislation stalled in the Senate.

Other key finds of the Marist Poll include:

-- 63% of Americans oppose new federal rules that allow sending prescription drugs for medication abortions through the mail instead of having women get them in person from a specially certified health provider.

-- Three-quarters say doctors, nurses or other health care professionals who have religious objections to abortion should not be forced to perform them.

-- A majority (54%) believe organizations who have religious objections to abortion should not be legally required to provide insurance coverage for abortion.

-- Nearly three-quarters (73%) of Americans either “oppose” or “strongly oppose” using tax dollars to support abortion abroad, including 59% who self-identify as pro-choice.

Marist surveyed 1,004 adults Jan. 4-9 via landline or mobile numbers and interviewed respondents by telephone using live interviewers; survey questions were available in English or Spanish. Overall, the margin of error is plus or minus 3.3 percentage points.

Nearly three-quarters (73%) of Americans either “oppose” or “strongly oppose” using tax dollars to support abortion abroad, including 59% who self-identify as pro-choice.

In the results of another survey released ahead of the Jan. 21 March for Life, three out of four millennials (those born between 1981 and 1996) and those defined as Gen Z (born between 1997 and 2012) say they want limits on abortion -- with more than four in 10 favoring either no abortion at all or abortion limited to the exceptions of rape, incest, or to save the life of the mother.

Fifty-two percent of millennials and Gen Z indicated that after an unborn baby’s heartbeat is detected, “they want either no abortion at all or abortion only with exceptions made for rape, incest or when the mother’s life is in danger,” the survey said.

The Hyde Amendment protections are supported by 54% of these respondents; 55% said they oppose funding abortion worldwide.

These results were from a survey conducted for by Vinea Research for the Students for Life of America’s Demetree Institute for Pro-Life Advancement.

Vinea conducted a 10-minute survey online of more than 900 respondents between ages 18 and 34 Jan. 5-11. The overall margin of error was plus or minus 3.5 percentage points.