Our readers’ reflections on the Jan. 6 attack on the U.S. Capitol 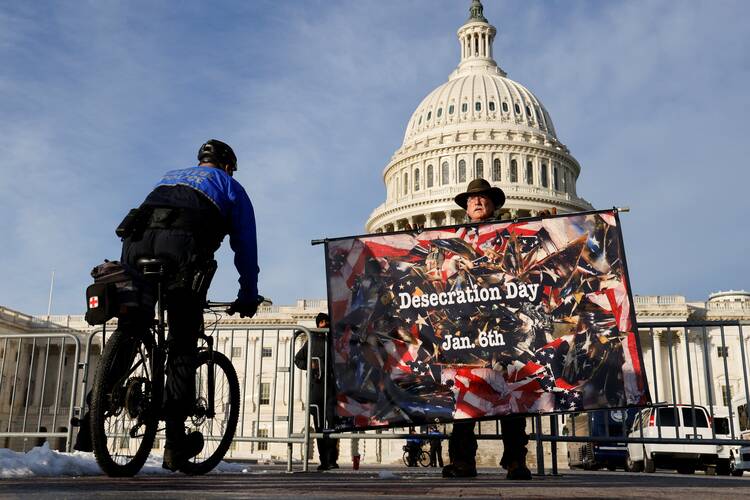 A man in Washington demonstrates near the U.S Capitol Jan. 6, 2022, the first anniversary of the attack on the U.S. Capitol by supporters of former President Donald Trump. (CNS photo/Jonathan Ernst, Reuters)

In the January issue, the editors reflected on the first anniversary of the attack on the U.S. Capitol on Jan. 6, 2021, the day “we and the world saw the United States, too, is a fragile democracy, as vulnerable to demagoguery and the exploitation of populist sentiment as anywhere else in the world.” But while 12 months ago, many voices from both sides of the isle united in condemning the violence, today it has become a partisan affair. “If our present officeholders are not up to the task,” the editors wrote, “then at the same time that they protest and critique incumbents, the American people should also prioritize electing better replacements, even when our constitutional house is not visibly on fire.” Dozens of readers responded to the editorial, including the following reflections:

The editors have given a task to the citizens of our country as though it were a routine term paper assignment.

I visualize a future historian, probably not an American—maybe German, Argentinian or even Greek—observing that like so many other societies in the past, ours tried representative democracy but just couldn’t cut it.

I am a Democrat, but don’t like everyone from Liz Cheney to Lauren Boebert being lumped in the same stereotype, let alone my Republican neighbors. I think stereotyping fosters hate, and presumably that’s what we (Catholics) are against.

What is the “right” afraid of? A bully and a liar? If we lose the vote, democracy will be over. It is way past time for my Democratic and Republican friends to stand up to Mr. Trump. Enough already.

Trump questioned the validity of the 2020 election results. Multiple Democrats have done precisely the same thing, dating back to the election of George W. Bush and continuing through the 2016 election. So if questioning election results amounts to promoting an insurrection, America, in fairness, should critique more than just former President Trump. Criticism should also be directed to the patent partisanship of the House Committee on Jan. 6, whose members were all chosen by a speaker who refused to seat the proposed G.O.P. committee members. How would any of us like being tried by a jury hand-selected by a prosecutor who detests us? I’m looking for a balanced and fair approach, which America seems incapable of providing. I’d like less politics and more spirituality.

Perhaps a key unaddressed issue here, Patrick, revolves around central questions: What are the implications of Jan. 6 for American democracy and does it signify the start of an ongoing attempt to subvert our elections? Many, perhaps like yourself, don’t think such questions matter. Others, like me, are very alarmed—some finding solace and strength from the Bible and spirituality.

Unfortunately, America’s poor educational system has created a large portion of the electorate that lacks critical thinking skills and is unable to distinguish fact from fiction. Despotism plays on ignorance and propaganda, and the world has, right now, a glut of propaganda internet tools that are unbridled.

Oh for heaven’s sake—the few hundred dimwits who invaded the Capitol in the Jan. 6 riots deserve to be prosecuted as they are. But claiming this was some kind of coup or insurrection, like the Bolsheviks storming the Winter Palace or the Confederates shelling Fort Sumter, is ridiculous and hysterical. Trump had his legal chance to show fraud was serious enough to have changed results in the four states that mattered and utterly failed to do so. Mr. Biden won fair and square, and Trump’s churlishness reminds most sensible conservatives why we were always wary of him.