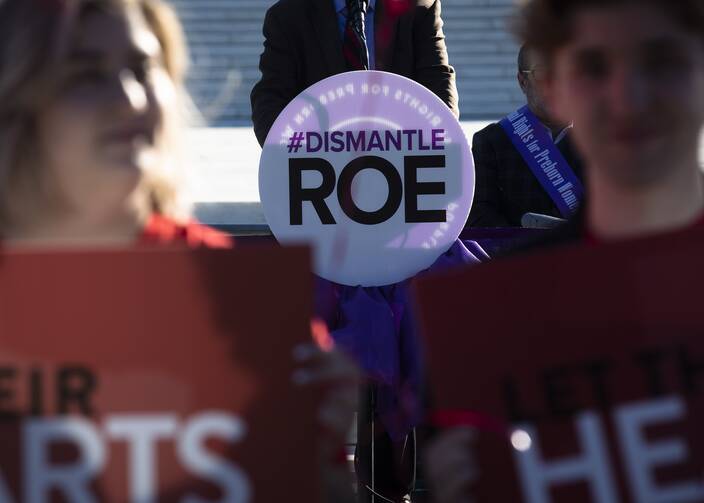 WASHINGTON (CNS) -- Assuming the Supreme Court upholds Mississippi’s law banning most abortions after 15 weeks in its decision in Dobbs v. Jackson Women’s Health Care, the future of the pro-life movement may depend on a move away from partisan politics, specifically an alignment with Republican politicians.

That was one conclusion of an online panel discussion Jan. 18 on “Pro-life Movement at a Crossroads: Dobbs and a Divided Society,” sponsored by Georgetown University’s Initiative on Catholic Social Thought and Public Life.

This alignment in recent years included President Donald Trump, who spoke at the 2020 March for Life rally on the National Mall.

He also appointed three Supreme Court Justices -- Neil Gorsuch, Brett Kavanaugh and Amy Coney Barrett -- who are expected to be key in upholding Mississippi’s law in Dobbs, a case seen by many as a direct challenge to the 1973 Roe v. Wade decision, which legalized abortion nationwide. The Dobbs ruling is expected within months.

And the alignment will be evident at the March for Life Jan. 21. For a pre-march fund-raising breakfast on Capitol Hill, all 42 invited members of Congress, including House Minority Leader Kevin McCarthy of California, are Republicans.

The future of the pro-life movement may depend on a move away from partisan politics, specifically an alignment with Republican politicians.

“I think it is important to know that if the Supreme Court rescinds Roe v. Wade, it will mean ... a greater divide” between Democratic- and Republican-dominated states as far as their abortion laws, said Dan Williams, a history professor at the University of West Georgia.

“So, even as a number of states move toward restricted policies, we can expect other states will move to a more permissive policy making abortion more available, not only for women in those states, but for women who want to go across state lines to have an abortion,” he said.

“In fact, if the 16 southern and Midwestern states who are likely to restrict abortion ... are allowed (to) and close all abortion clinics, it would not equal the number of abortion clinics in New York,” he said.

“One of the challenges the pro-life community has is its inability to be attractive to African Americans,” said Gloria Purvis, host of a podcast at America Media. “We have to be sensitive ... that racism does exist, not just in the womb with abortion, but outside of the womb as well.”

“We need to decouple the movement from being seen as strictly politically conservative, because those words for some communities mean racist, and we need to help people understand that we are not that, and we need to call out those leaders in our movement who have done and seem to perpetuate things that are contrary to our pro-life values,” she added.

“I do think there is room to work with Democrats and Republicans, but in order to do that, we have to depoliticize pro-life” issues, said Williams.

“The pro-life movement is identified with a Republican Party that a number of people who are not part of it, who are skeptical of Trump, view as dangerous to American democracy, he added.

“I do think there is room to work with Democrats and Republicans, but in order to do that, we have to depoliticize pro-life” issues, said Williams.

Williams asked, “Has the pro-life movement inadvertently engaged in utilitarian thinking that would ultimately tarnish the movement’s moral reputation?”

“The law is one of our best and most important educators,” said Erika Bachiochi, a legal scholar at the Ethics and Public Policy Center in Washington.

“And so, when you push back, when you have the possibility of even the possibility of allowing legislators to pass laws that are more protective of unborn children,” she said, “I think that it can reset the culture, so when people are engaging in sexual activity, which is the precursor to having an unexpected pregnancy, that they can start to take more seriously that consequence, that is an asymmetrical one for women.”

Bachiochi said she was “thinking of irresponsible men, first and foremost. For that reason ... around the time of Trump's inauguration -- when I could not vote for him either time -- I wrote ... how he was the worst representative of the pro-life movement because of the way he spoke about women.”

“In that way,” she said, “abortion opens the floodgates to the sexual prerogative that men take on themselves -- ‘Hey, you can go get an abortion.”

But “we have to see the silver linings and look at the ways he pushed many in the GOP, I think,” such as U.S. Sen. Mitt Romney, R-Utah, who as a presidential candidate in 2012 “was all about the tax cuts, et cetera,” and now as a member of the Senate has “one of the most robust family policies that has been put out by either party.

“I would want to see where we go from here, and just try to work with those Republicans who have made a lot of gains in seeing how important it is to have the family policy corrective of the libertarian orientation,” Bachiochi said.

In February 2021, Romney introduced the Family Security Act, which would provide a monthly cash benefit for families who qualify and would let parents “choose how best to support their family.” It also would support families during pregnancy, promote marriage “and provide equal treatment for both working and stay-at-home parents,” according to the measure.

As the president and founder of New Wave Feminists, panelist Destiny Herndon-De La Rosa said she tends “to work outside of the political realm.”

"How can we create the safety nets that women need, no matter what is going on in Washington or federal levels? How do we look at the woman in front of us and say what is causing her to consider abortion?"

Her organization promotes a consistent ethic on life issues and its focus “is never on the legality of abortion, as much as how do we create a post-culture now,” she explained.

Such efforts need to be “on a micro level. How can we create the safety nets that women need, no matter what is going on in Washington or federal levels?” she asked. “How do we, as individuals, look at the woman in front of us and say what is causing her to consider abortion in the first place, right?”

The point “is not just to address the supply side,” Herndon-De La Rosa said. “We have to address demand. What is driving women to this and where can we as individuals meet those needs? I think the biggest thing facing us right now if Roe is overturned, are people going to say job well done and go home and stop?

“Are we going to see the necessity but still loving women ... no matter what the laws are in their states or our nation?”

She used her own experience to emphasize the importance of supporting a mother and child and “stepping up” to create a culture of life. Her mother became pregnant with her at 21 and she in turn got pregnant at 16.

Being able to find “calm in the storm” of chaos in such support, including from her family, “is the reason I now have a 21-year-old and I’m here because my mother had that support,” Herndon-De La Rosa added.

Correction: Erika Bachiochi was misquoted in a previous version of this article.