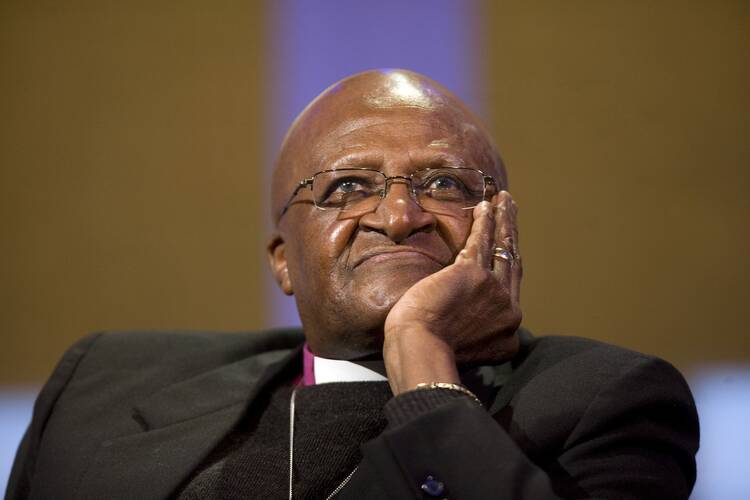 Anglican Archbishop Desmond Tutu is pictured in a Sept. 21, 2011, photo. Archbishop Tutu, the Nobel Peace Prize-winning Anglican cleric whose good humor, inspiring message and conscientious work for civil and human rights made him a revered leader during the struggle to end apartheid in South Africa, died at age 90 on Dec. 26, 2021. (CNS photo/Allison Joyce, Reuters)

I was in Cape Town, South Africa, at the end of August in 2002. I had just presided at my first Mass in my home parish in Milnerton, and I was enjoying a supper with my Jesuit brethren, my family and the two parish priests at a local restaurant. We were talking away when suddenly everyone fell silent. A hand tapped me on the shoulder.

“I believe congratulations are in order,” said Archbishop emeritus Desmond Tutu, who was standing by my side.

Stunned for a moment, I then leapt to my feet as “the Arch” continued, “I just came over to wish you God’s blessings on a long and fruitful ministry.”

I spluttered my thanks to him. We chatted briefly, before he returned to the corner of the busy restaurant where he was entertaining some American guests.

Later l got the full story. Peter, one of the parish priests, who in an earlier incarnation in the 1980s as a Capuchin friar had worked with Archbishop Tutu in conflict mediation in Cape Town townships, had seen the archbishop as we had arrived and gone over to greet him, telling him in the process that we were celebrating my ordination and first Mass.

That was the only time I ever met Archbishop Desmond Tutu personally, though I had heard him speak on numerous occasions, read his many books and articles and had even met his daughter Mpho, herself studying for priesthood at the Episcopal Divinity School, while I was at what was then the Weston Jesuit School of Theology in Cambridge, Mass.

I share this piece of autobiography as an example of the type of kindness often shown by this great South African human rights campaigner and Anglican clergyman known throughout the world for his human rights accomplishments. He was the first Black dean of Johannesburg, bishop of Johannesburg and later archbishop of Cape Town, winner of the Nobel Peace Prize in 1984 and chair of South Africa’s Truth and Reconciliation Commission—but above all, he was a committed priest and person of deep prayer.

Born in Klerksdorp, in what was then the Transvaal, in 1931, Desmond Mpilo Tutu trained as a teacher, married Nomalizo Leah Shenxane in 1955, and became deeply involved in his Anglican parish. Feeling called to priesthood, he trained at St. Peter’s Theological College in Rosettenville, Johannesburg, a seminary run by the Anglican Community of the Resurrection monks, whom he had known since childhood. He was close in particular to the Rev. (later archbishop) Trevor Huddleston, after whom he would name his first child. After two years of parish ministry he gained a scholarship to study theology at King’s College, University of London. Between 1962 and 1966, he completed honors and master’s degrees in theology.

He also served as curate in a number of parishes while in the United Kingdom. It was here, some biographers claim, that he gained particular insight into the apartheid struggle. It also made him convinced that apartheid was a Christian moral issue that he, as a Christian and a priest, was compelled to resist.

Returning to South Africa, he took up a lecturing post at the ecumenical Protestant Federal Theological Seminary in the Eastern Cape province in 1967. It was a time of theological and political ferment—the Black Consciousness Movement was growing and its religious dimension, Black theology, was gaining intellectual momentum in seminaries. Fedsem, as it was called, also deepened in Tutu his ecumenical commitment.

In 1970, he moved with his family to Roma, Lesotho, to teach at what would become the National University of Lesotho. He was offered and accepted a post with the international Theological Education Fund. Based again in the United Kingdom, his job as director of the Africa section of the fund took him around the continent. This task (1972-1975) ended when he was appointed dean of St. Mary’s Anglican Cathedral in Johannesburg, where he became the first Black incumbent in one of the most important positions in Southern African Anglicanism. In early 1976 he was nominated bishop of Lesotho; shortly after accepting the position, he warned then Prime Minister B. J. Vorster that the situation in the Black community was volatile, and violence might erupt if the state did not start to dismantle apartheid. He was ignored. As he had predicted on June 16, 1976, the student uprising in Soweto began.

But his tenure in Maseru, Lesotho, would not last long. In 1978 he was elected Secretary General of the South African Council of Churches, an organization of Protestant churches affiliated with the World Council of Churches. The S.A.C.C. was one of the most vocal Christian voices opposing apartheid and worked closely with the Catholic Church. It was connected to grassroots resistance movements that had emerged out of Black consciousness and the renascent Black trade unions in South Africa of the 1970s. Desmond Tutu was an obvious choice: already an outspoken opponent of the regime, yet also a voice calling for nonviolence and negotiation who understood white fears of majority rule. In this capacity he became a global figure of opposition, campaigning for worldwide pressure to end apartheid, advocating economic sanctions as a means to force an increasingly stubborn regime to come to the negotiating table. This work for a way out of what many believed would be a chaotic racial civil war led to his being awarded the Nobel Peace Prize in 1984.

Tutu’s tenure at the S.A.C.C. was also marked by both strong commitment to the “struggle” and a determination on his part that a spiritual (some might even say mystical) dimension should mark the lives of those working for the S.A.C.C. He instituted for staff bible studies, daily prayers (including at times saying the Angelus at midday), retreats and a monthly Eucharist.

Every day since his ordination, he would start the day with morning Eucharist.

He stepped down from the S.A.C.C. when he was appointed bishop of Johannesburg in 1985. This would last a year. In 1986, by a two-thirds majority of votes from laity and clergy houses in Cape Town, and with unanimous vote of Anglican bishops, he was appointed the first Black archbishop of Cape Town. This is the mother see of southern African Anglicanism, but the archbishop’s residence was located in a white-only area. The apartheid government requested that he apply for “honorary white” status to live there, but he refused. By taking up this post he transformed the archdiocese. He encouraged consultative governance, created an Institute of Spirituality, and pressed on with his anti-apartheid activities. Every day since his ordination, he would start the day with morning Eucharist.

He was relieved when, in 1990, the state-sponsored ban on liberation groups and advocates was lifted, Nelson Mandela was released from prison and the negotiations that would bring South Africa democracy began. His last great service to the country came when, between 1996 and 1998, he chaired the nation’s Truth and Reconciliation Commission. The year 1996 also marked his retirement as archbishop; in a move unprecedented in Anglican history, on retirement he was given a special title, archbishop emeritus. Despite health issues—he was diagnosed with prostate cancer in 1997—he did not vanish from public life. In between medical treatments, he guest lectured in U.S. universities, wrote extensively and became a vocal supporter of L.G.B.T.I. rights.

This was a natural extension for him of his theological anthropology. Archbishop Tutu’s God is all-loving, welcoming and inclusive of people regardless of race, sex or gender orientation. He believed that God accepts people as they are and, to quote the title of one of his books, we are “made for goodness,” made to love and be loved regardless of our identities. For these reasons he had earlier strongly supported women’s ordination. Though he officially announced that he was retiring from public life in 2010, he would continue to speak up for human rights causes, including economic and gender justice, Palestinian rights and care for the earth, among others. None of this was motivated by a desire to be fashionable; it was rooted in his carefully thought out Anglican theology.

His theology might well be described as a mixture of the deeply justice-oriented “sacramental socialism” of Anglo-Catholicism, the liberal Anglican insistence on right reason and commitment to a scientific worldview, mingled with the commitment to finding common ground. All of this was infused with his deep spirituality rooted in the Eucharist and other sacraments, in a Benedictine spirit of hospitality and in sustained prayer. This openness to enemies and friends, and to believers and unbelievers of all shades, marked his ministry. He got along well with his Catholic counterparts in Johannesburg and Cape Town. He worked regularly with religious communities and helped cement the growing religious resistance to apartheid in the 1970s and 1980s. For many, including people with few religious convictions, he was, as a result, “our archbishop.” One of his biographers, Michael Battle, has openly called Desmond Tutu a saint.