In Cyprus, Pope Francis has a message for all of Europe: We need dialogue and open doors—not walls. 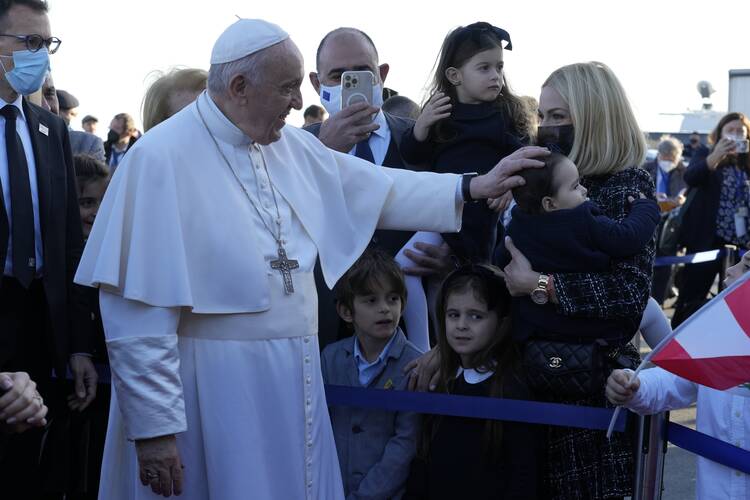 Within hours of arriving in Nicosia, the capital of Cyprus, Pope Francis addressed head-on the main cause of people’s suffering on this beautiful island: the division of the country following the invasion by Turkey in 1974. He also referred to the grave problems caused by the pandemic and the difficulties resulting from migration.

He did so at the presidential palace in Nicosia in his keynote address to the political authorities and the diplomatic corps, after paying homage to the man Greek Cypriots consider to be the father of their nation, Archbishop Makarios III. The archbishop was the head of the autocephalous Church of Cyprus and the first president of the country, serving from 1960, when Cyprus gained independence from Britain, to 1977.

The country’s current president, Nicos Anastasiades, gave a welcome address, praising Pope Francis as a voice for peace in the world. He also praised Francis’ defense of human rights, his concern for the poor and his fight against terrorism, religious fundamentalism, racism and the violent expulsion of peoples. He commended his efforts to combat climate change and said Cyprus shared all these concerns.

Within hours of arriving in the capital of Cyprus, Pope Francis addressed head-on the main cause of people’s suffering: the division of the island following the invasion by Turkey in 1974.

The president told Francis that Cyprus has become an island of first arrival for migrants, and many came through the Turkish-occupied north of the island. He thanked the pope for sharing this burden by offering to bring 50 migrants to Rome and described this gesture as a message to Europe to develop a more equitable migration policy.

President Anastasiades went on to denounce the invasion of the island by Turkey, which occupies 36 percent of the island and has displaced 30 percent of the population and desecrated or took over the places of worship of the different churches—Orthodox, Armenian and Latin. He denounced the “intransigence” of Turkey toward finding a peaceful solution to the division of the country and its increasing aggression both in the occupied north and in the surrounding sea. He said the Republic of Cyprus would continue to fight for the peaceful unification of the country and asked the Holy See and the international community to support their efforts.

Pope Francis said in reply: “I have come as a pilgrim to a country geographically small but historically great; to an island that down the centuries has not isolated peoples but brought them together; to a land whose borders are the sea; to a place that is the eastern gate of Europe and the western gate of the Middle East.” He praised Cyprus for being “an open door, a harbor that unites” and “a crossroads of civilizations.”

Pope Francis praised Cyprus for being “an open door, a harbor that unites” and “a crossroads of civilizations.”

He said he was “deeply moved” to be able “to retrace the steps of the great missionaries of the early church, particularly Sts. Paul, Barnabas and Mark,” in this land where “the first great inculturation of the Gospel” began on the continent of Europe. He said he had come as a pilgrim “to walk with you, dear Cypriots, all of you, in the desire that the good news of the Gospel may bring from here to Europe a message of joy, under the banner of the Beatitudes.”

He said Cyprus radiates “a natural beauty that must be protected and preserved by suitable environmental policies,” a beauty that is evident “in its architecture, its art, especially its sacred art, and its religious crafts, and its many archaeological treasures.” Indeed, he said, this small island “represents a pearl of great price in the heart of the Mediterranean.”

Referring to the invasion by Turkey in 1974, Francis said: “The greatest wound suffered by this land has been the terrible laceration it has endured in recent decades. I think of the deep suffering of all those people unable to return to their homes and their places of worship,” he said.

“The way of peace, which reconciles conflicts and regenerates the beauty of fraternity, has a single word as its signpost. That word is dialogue.”

He assured the audience following on TV, “I pray for your peace, for the peace of the entire island, and I make it my fervent hope.” He told them, “The way of peace, which reconciles conflicts and regenerates the beauty of fraternity, has a single word as its signpost. That word is dialogue.”

Addressing a people who have already suffered for 47 years, the pope said: “We ought to help one another to believe in the patient and unassuming power of dialogue, on the basis of the Beatitudes. We know that it is no easy road; it is long and winding, but there is no other way to achieve reconciliation.”

He called for an “openness to sincere discussion that would give priority to people’s needs [and] ever more effective involvement on the part of the international community.” He emphasized the need “to protect the religious and cultural heritage, and the restitution of all that people hold most precious in that regard, such as places or at least sacred furnishings.”

Pope Francis: “Times that seem least favorable, when dialogue languishes, can be the very times that prepare for peace.”

Francis is well aware that Turkey has not shown great interest in working for reconciliation at the present time. Nevertheless, he told the authorities of Cyprus, “Times that seem least favorable, when dialogue languishes, can be the very times that prepare for peace.” In these circumstances, he said, “may hatred not be allowed to prevail, may efforts be made to bind up wounds and to keep in mind the situation of those who have disappeared.”

He told them that when they are “tempted to yield to discouragement” they should “think of coming generations, who long to inherit a world of peace, cooperation and cohesiveness, not one marred by perennial rivalries and poisoned by unresolved disputes.”

While there are “conflicts and human tragedies” in the Mediterranean region, Pope Francis said, “Cyprus, as a geographic, historical, cultural and religious crossroads, is in a position to be a peacemaker.” He prayed it would become “a workshop of peace in the Mediterranean.”

Francis reminded the nation that “peace is not often achieved by great personalities but by the daily determination of ordinary men and women.”

He reminded the nation that “peace is not often achieved by great personalities but by the daily determination of ordinary men and women.” Moreover, he said, “The European continent needs reconciliation and unity; it needs courage and enthusiasm, if it is to move forward. For it will not be the walls of fear and the vetoes dictated by nationalist interests that ensure its progress, nor will economic recovery alone serve to guarantee its security and stability.”

Cyprus is an island that usually receives many tourists, but the Covid-19 pandemic has hit the country hard. Francis referred to this in his speech at the palace, when he told them, “The pearl of Cyprus has been darkened by the pandemic, which has prevented many visitors from visiting it and seeing its beauty; here, as in other places, this has aggravated the effects of the financial and economic crisis.

“In this period of recovery, however, it will not be anxious efforts to recover what was lost that will ensure and consolidate growth,” he said, “but the commitment to promote the recovery of society, especially through a decisive fight against corruption and everything that violates the dignity of the person; here I think, for example, of the scourge of human trafficking.”

He was warmly applauded when he finished speaking. He said goodbye to the president and drove to the nunciature in the buffer zone between Turkish and Cypriot forces that is guarded by U.N. troops, a reminder that the island remains divided.