Catholic bishops in Iowa want their parishioners to get vaccinated. They’re launching a multimedia campaign to get it done. 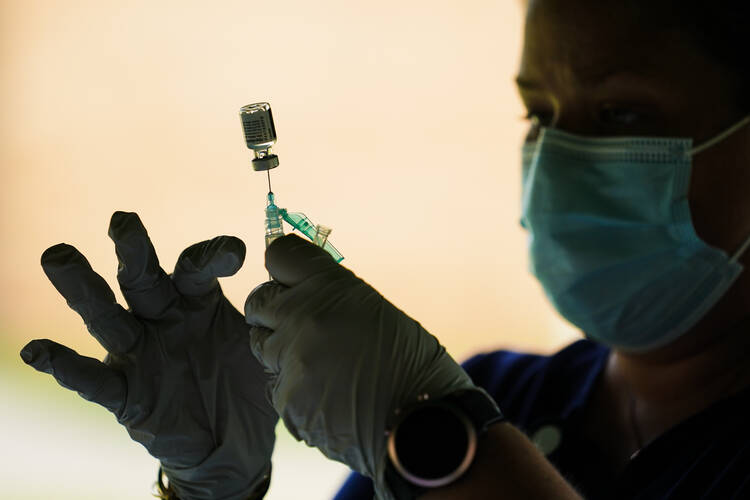 A syringe is prepared with the Pfizer COVID-19 vaccine at a clinic at the Reading Area Community College in Reading, Pa., on Sept. 14, 2021. (AP Photo/Matt Rourke, File)

The four dioceses in Iowa are partnering with Catholic Charities to launch a multimedia campaign aimed at convincing Catholics and other Iowans to get vaccinated to help slow the spread of Covid-19.

“Despite its effectiveness, many in the general population are hesitant to receive the vaccine,” reads a statement signed by the state’s four bishops, Archbishop Michael Jackels of Dubuque, Bishop R. Walker Nickless of Sioux City, Bishop Thomas Zinkula of Davenport and Bishop William Joensen of Des Moines.

“We restate that vaccination has been proven to be the most effective way to fight the virus that continues to affect and kill so many,” the statement continues.

The four dioceses in Iowa are partnering with Catholic Charities to launch a multimedia campaign aimed at convincing Catholics and other Iowans to get vaccinated.

Catholics are shown to be more open to vaccination than some other religious groups. A survey from August found 82 percent of U.S. Catholic adults said they had received at least one vaccine dose, compared to 57 percent of white evangelical Christians.

Pope Francis received at least two doses of the Pfizer-BioNTech Covid-19 vaccine and in September he said he found opposition to the shots “a bit strange.”

But some Catholic figures in the United States and elsewhere have been vocal in their vaccination skepticism, in some instances drawing rebukes from church leaders.

In Australia, for example, Bishop James Foley said some Catholics were peddling misinformation about the vaccines and urged them to stop. “It’s making people angry; it’s polarising, and it’s just not of God,” he said.

Pope Francis received at least two doses of the Pfizer-BioNTech Covid-19 vaccine and in September he said he found opposition to the shots “a bit strange.”

According to the Iowa Catholic Conference, Iowa ranks 25th nationally in terms of vaccination rates, and rural Iowans are seemingly still hesitant.

“In communion with Pope Francis, we remind the faithful that the common good of public health should take precedence over any moral reservation about receiving vaccines; they will not be effective if people do not use them,” the bishops said in their statement.

Part of the campaign includes video testimonials of Iowans explaining why they chose to get vaccinated.

Kent Ferris, the Catholic Charities director for the Diocese of Davenport, said in a statement the church seeks to connect people who are hesitant about the Covid-19 vaccines to others who have chosen to take the shots.

“For those who still have questions about whether or not getting the vaccine will make a difference, we want people to know that their friends and neighbors across Iowa believe in the vaccine,” Mr. Ferris said. “There are many people ready and willing to talk with those who are struggling to make a decision about whether to be vaccinated. It’s worth our efforts to join the conversation across our state.”