Our founding fathers warned us about QAnon 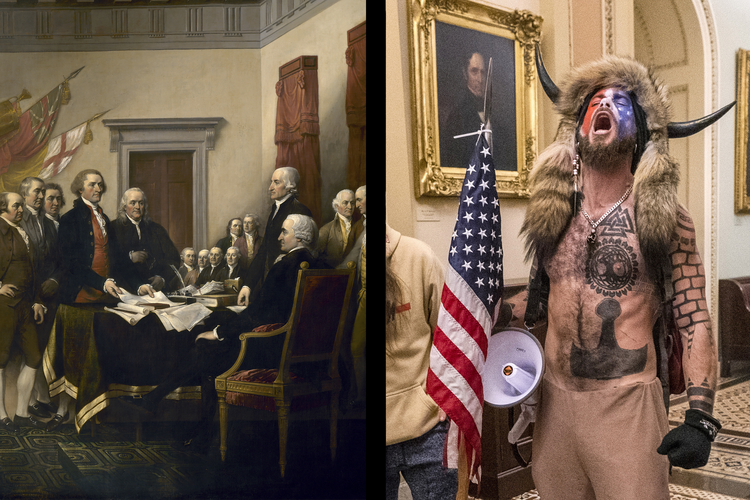 Hundreds of our fellow Americans gathered in Dallas, Tex., in early November to witness the second coming of John F. Kennedy Jr. Members of the QAnon conspiracy cult, who believe that former president Donald J. Trump is leading a crusade against a Satan-worshipping cabal of pedophilic sex traffickers led by Hillary Clinton, gathered at the site where President John F. Kennedy was assassinated because they believed that the late president’s late son was about to be resurrected in order to run for vice president on a ticket with Mr. Trump in 2024.

You read that right.

The whole thing is so utterly absurd that it would be laughable if not for the fact that this insanity is but the tip of a sizable iceberg. Lurking beneath the JFK Jr. story, which few people are willing or able to believe, is a deeper, more impenetrable and more dangerous complex of lies and half-truths, which many people are all too willing and able to believe. Call it misinformation, fake news, alternative facts or just plain hooey—whatever you call it, it forms a big part of the daily information diet of many Americans. According to a 2019 poll from the Pew Research Center, more than half of Americans report encountering fake news online and rate it as a more serious threat to American democracy than terrorism.

According to a 2019 poll from the Pew Research Center, more than half of Americans report encountering fake news online and rate it as a more serious threat to American democracy than terrorism.

They are right to worry. The algorithms that drive our digital news feeds on platforms like Facebook (see the editorial in this issue), not only connect us with news and information we are likely to “like,” but with people and groups we are likely to either love or hate. This is how groups like QAnon form. On a more mundane level, it is also why Republicans and Democrats, among other groups, seem to operate from completely different datasets, for those algorithms create a silo effect. News and information, accurate or not, can be easily shared within a group but not easily shared from one group to another, and especially not among groups who hold divergent worldviews.

This is a 21st-century problem, but we were first warned about it in the 18th century. Our founding fathers called what we are experiencing today factionalism. Faction was the bugbear of men like James Madison. In Federalist Number 10, Madison defines a faction as “a number of citizens, whether amounting to a minority or majority of the whole, who are united and actuated by some common impulse of passion, or of interest, adverse to the rights of other citizens or to the permanent or aggregate interests of the community.” A faction, in other words, pursues its narrow interests at the expense of the common good. And Madison was not just theorizing. He had a specific example in mind: Rhode Island. Eighteenth-century Rhode Island was rife with factionalism. And he knew why, as he related to his readers in Federalist Number 51: Rhode Island was too small.

It sounds counterintuitive, perhaps, but James Madison believed that only a large society, occupying a vast expanse of space, could be effectively governed as a republic. If the place were too small, then like-minded people could too easily find one another and form a faction. A large country would be more stable. “In the extended republic of the United States,” Madison wrote, “a coalition of a majority of the whole society could seldom take place on any other principles than those of justice and common good.”

What does this say about the United States in the 21st century? Quite a lot, actually. By annihilating distance, the internet has transformed the contemporary United States into 18th-century Rhode Island. That’s why there were hundreds of people in Dallas looking for JFK Jr. rather than just one lone nutter. By forming us into like-minded groups, the algorithms are, in fact, tearing us apart. As the editors write in this issue about the Facebook papers, “these revelations offer a robust demonstration of the reality of original sin, which seeps through our social media feeds much as it does anywhere else in human society.”

James Madison was all too familiar with original sin. He believed it was the primordial force that drives us to seek one’s self-interest instead of the common good. Since human beings are disposed to factionalism by virtue of original sin, thought Madison, the success of the republic would require a carefully calibrated system of checks and balances in a government with separation of powers.

The question now is whether that revolutionary 18th-century system can still effectively work in a 21st-century country that has become, through the digital revolution, paradoxically, a lot smaller.