COP26 did not go far enough. It’s time to take the Pope Francis-approach to climate change. 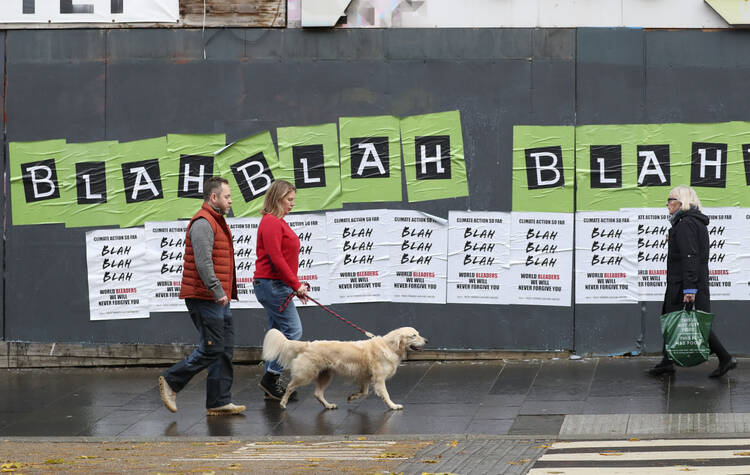 People walk past posters placed by climate activists ahead of a protest march in Glasgow, Scotland, on Nov. 5, 2021. (AP Photo/Scott Heppell)

The COP26 climate summit in Glasgow was a tale of two cities: one afloat on bold pledges and new promises, the other sinking under the weight of “Greta Mania” and the chants of “blah, blah, blah” from the followers of the Swedish environmental activist Greta Thunberg. Not even Barack Obama’s celebrated oratory or a surprise U.S.-China cooperation pact could reconcile the differences.

To better understand the contrast, we can explore another pair of cities: Paris, where a climate accord was hammered out in 2015, versus Rome and its body of Catholic thought. They reveal vastly different perspectives on climate change.

The Paris climate agreement of 2015 was heralded as a major accomplishment, but what was achieved after two decades of negotiations? Voluntary intentions by countries to do better, called Nationally Determined Contributions. These are a bit like New Year’s resolutions, albeit on a grander scale, and we all know the fate of such resolutions. True to form, the Paris resolutions are falling well short of the mark.

We should not have expected anything more out of Paris than weak volunteerism rooted in narrow national self-interest.

But we should not have expected anything more out of Paris than weak volunteerism rooted in narrow national self-interest. The global system of neoliberalism and the structure of the United Nations Framework Convention on Climate Change predisposed the Paris Agreement to be limited in vision and inadequate to the demands of climate change. To expect otherwise is to expect, in Cervantes’s words, a pear from an elm tree.

The Paris approach had everything backward. It began with the scientific data of global warming and manufactured elaborate methods to stop it, never pondering the larger question of, “To what ends?” Rome, or the Catholic Church, begins rightly by defining life’s purpose and then searches for sociopolitical structures that will get us there.

Paris takes as its starting point the Hobbesian view that the natural state of humanity is “solitary, poor, nasty, brutish and short.” Rome starts with the Genesis claim that creation “is good, it is good, it is very good.” Paris expects virtuous behavior from an anthropological premise that privileges self-interest and individual liberty. Rome understands that virtue flows from the pursuit of the common good defined by solidarity, charity and reciprocity.

Paris asks us to reason our way to ecological sustainability from an ideological starting point of planetary plunder. Rome encourages us to use Ignatian spirituality to seek God in all things while instructing us that we are all stewards of the earth.

Paris seeks climate solutions through an elaborate system of transactional market exchanges. Rome instructs us that salvation comes through the grace of covenantal, not contractual, relationships. Paris seeks solutions fueled by the profit motive, encouraged by market reforms and “green growth.” Rome is driven by the motive of the prophet who speaks of love, justice and forgiveness shorn of any enchantment of mammon.

Paris asks us to reason our way to ecological sustainability from an ideological starting point of planetary plunder. Rome instructs us that we are all stewards of the earth.

Rome therefore informs the climate change challenge on two levels: the epistemological, by properly framing the question and identifying the root causes of the problem; and the practical, by offering operational principles upon which sociopolitical solutions can emerge.

The Roman document that most obviously serves as counterpoise to the Paris Agreement is “Laudato Si’.” Pope Francis instructs us that all things are connected and that climate change, social injustice and economic inequality are inextricably linked. Throughout the encyclical, Francis explains how our idolatry of the machine and our unbridled pursuit of narrow self-interest crowd out any sense of justice and the common good.

The encyclical reveals that the outer work of climate change is dependent upon the inner work of spiritual awareness. Paris’s market mechanisms and technological fixes, while helpful in pushing us in the right direction, fail to ask where that path leads. New technologies can help ameliorate the symptoms of climate change, but they can never address the sources of climate change.

Catholic social thought—emphasizing the primacy of personalism and solidarity—tells us that local action illuminates the roadmap to climate solutions.

Catholic social thought—emphasizing the primacy of personalism and solidarity—tells us that local action illuminates the roadmap to climate solutions. The principle of subsidiarity also tells us that while international agreements may be necessary in certain circumstances, our default should be the local community. Climate change and renewable energy policy speak to this principle, as local jurisdictions are consistently at the forefront of creative climate action. In this respect, the church’s preferential option for the poor (and for the planet) rests on a preferential nod to the local.

The church emphasizes the public square, where we come together not as consumers to accumulate but as citizens to deliberate in pursuit of the common good. This deliberation emphasizes healing and restoration, not punishment and retribution. Thus, the pursuit of the Jesuit goal of cura personalis, or caring for the whole person, may cumulatively lead to cura planetis.

This explains the limitations of Glasgow. Those driven by the ethos of Rome are thwarted by the pathos of falling short in Paris. It is difficult to discover the new when we cling so tightly to the old. This moment requires that we loosen our fixation on the Paris Agreement and realize that the structures of the old—the institutions that depend upon perpetual consumerism and the desecration of our environment—are in desperate need of reform and transformation. A neoliberal solution (the Paris Agreement) will not solve a problem (climate change) compounded by neoliberalism. For that, we need to return to the verities found in all religions, Roman and beyond, Abrahamic and Indigenous, that speak to the virtues of sociopolitical structures rooted in the spiritual values that define our humanity and frame our communal relationship with God’s creation.

Watch: Why the COP26 climate conference matters for Catholics

[Related: The Green New Deal can embody the Catholic principle of subsidiarity. Also: Four ways your parish can fight climate change (on a budget).] 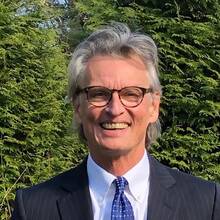