The Paris Climate Agreement: Toward a New and Global Solidarity? 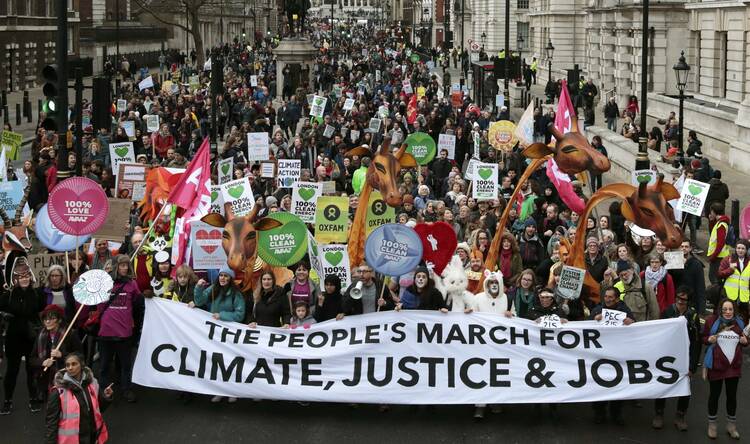 There is a real chance that the Paris agreement on climate change, endorsed by 195 countries, could prove a real turning point. And we need a turning point because climate change is one of the most significant moral challenges of the 21st century. If we continue on our current trajectory, the implications could prove catastrophic—especially for the world’s poor and excluded, the very people who bear the least responsibility for the current state of affairs.

The implications of inaction are frightening. The World Bank recently estimated that climate change could push 100 million people into extreme poverty by 2030. Another study—commissioned by 20 governments from a group called DARA International—estimated that climate change could kill 700,000 by 2030, and nearly all of these deaths would be in developing countries. And 2030 is just around the corner. As the century progresses, the situation would get progressively worse, and the poor would on the front lines—facing the full force of ever more severe droughts, floods, heatwaves, and storms. It is no accident that The Lancet—one of the world’s most prestigious medical journals—dubbed climate change as the greatest global health issue of the 21st century. And a recent study in Nature suggests that global incomes could fall by 23 percent by the end of the century—and once again, the poor would lose out most.

Clearly, the time has come to stop fiddling while the planet burns. And the international community has been fiddling for a long time now. Back in 1992, at the Rio Earth Summit, world leaders pledged to take action to limit the effects of global warming. And yet in the quarter of a century since Rio, there has been no progress whatsoever. Instead, there was a blame game. The United States refused to move until the major developing countries also committed to move. And for their part, the developing countries rejected the seeming hypocrisy of their richer neighbors—insisting on taking away the punch bowl after they themselves had become inebriated.

Yet just last week, the international community chose hope over acrimony. Yes, there was plenty of disagreement, but nations still managed to coalesce around the global common good. Can this deal work? There jury is still out on that, but there is a certainly reason to be optimistic.

The naysayers, and there are plenty of them out there, will note that the agreement is long on words, short on actions. The core of the commitment is to peak global greenhouse gas emissions as soon as possible, with the goal of reaching net-zero emissions in the second half of the century. This is an ambitious goal. Yet this is what is required to stay under the self-imposed red line of a 2-degree Celsius global warming limit. In fact, the agreement actually opens the door for even more ambition, limiting warming to 1.5 degrees. Given that the earth has already warmed by 1 degree Celsius, this is the tallest of tall orders.

This commitment, bold and ambitious as it is, is not legally binding. Instead, countries are asked to submit their own national plans through a bottom-up approach. The problem is that these numbers simply don’t add up right now. The plans are nowhere near ambitious enough to stay under the 2-degree limit, let alone 1.5 degrees.

But this is not the end of the story. The agreement is predicated on a dynamic, evolving process. Every five years, countries are required to come back with updated plans, with the aim of ratcheting up ambition. And the agreement establishes a process whereby implementation will be assessed every five years, which ensures a degree of transparency and accountability.

So while the Paris agreement does not deliver the solution itself, it delivers a solid foundation from which the solution can be built. What matters now is political will, and the translation of this will into concrete action on the ground.

This has two interlocking dimensions. The first is obviously to ramp up ambition in terms of reducing greenhouse gas emissions. We know that decarbonization over the course of the century is feasible. The technology is getting better all the time. The experts tell us the required energy transition costs in the range of 1-2 percent of GDP a year. As a point of comparison, world military spending is close to 2 percent of global GDP. And the IMF tells us that fossil fuel subsidies amount to a whopping 6.5 percent of global GDP, largely because polluters are not paying the full social costs of their activities. So it is less a matter of resources than priorities.

The second dimension is for the developed countries to help their poorer neighbors cope with climate change—both to invest in renewable energy and adapt to the effects of a changing climate that are already built in. This is not “charity”, or even “aid”. It is rather a matter of justice. It should be seen as a debt owed by developed countries to developing countries, as these countries grew rich from burning fossil fuels at the expense of their poorer neighbors. In this sense, the Paris agreement rightfully calls the pledge of $100 billion a year a floor rather than a ceiling. But that pledge now needs to be backed up with real money, which to date has been sorely lacking.

All of this gives rise to the clearest of moral imperatives. We have already witnessed the power of the moral narrative in the lead-up to Paris. Most observers would acknowledge the vital role played by Pope Francis as the conscience of the climate talks. His encyclical, Laudato Si’, was a real game changer—a shot in the arm as the negotiations reached the final stretch. And when the climate march, canceled for security reasons, was replaced by a sea of shoes in the center of Paris, the image of the pope’s well-worn footwear was beamed across the globe. It sent a compelling message—Pope Francis stands (quite literally) with you.

And it was not just Pope Francis. Other religious leaders spoke out with force and passion. Leading representatives of the different faiths—Jewish, Islamic, Buddhist, and Hindu—issued timely statements on the moral imperative to care for the earth. And faith-based petitions amounting to almost 2 million signatures were presented to President Hollande during the negotiations.

As we move into the next phase—the move from grand commitments to concrete actions—this moral dimension will become even more important. It will be the best antidote to waning ambition, to political distraction, and to the reassertion of narrow economic interests. This has special resonance in the United States, where leading politicians deny the very existence of climate change and threaten to shred the Paris agreement the moment they gain power.

In “Laudato Si,’” Pope Francis called for a “new and universal solidarity” to protect our common home. This is what is required to make the Paris agreement succeed. And succeed it must, for the stakes could hardly be higher.