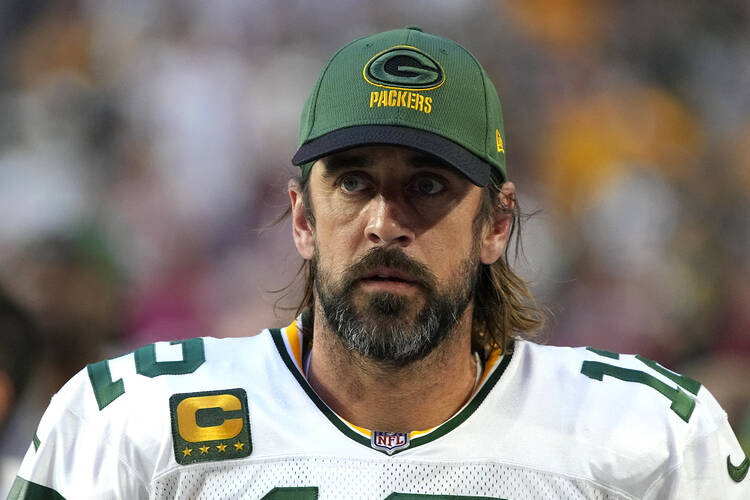 Green Bay Packers quarterback Aaron Rodgers is shown during the first half of an NFL football game against the Arizona Cardinals, Thursday, Oct. 28, 2021, in Glendale, Ariz. Packers quarterback Aaron Rodgers is in the NFL’s COVID-19 protocol and will miss Sunday’s game at Kansas City. Green Bay coach Matt LaFleur confirmed Wednesday, Nov. 3, 2021, that Rodgers was in the protocol, but would not say if Rodgers had tested positive nor if the reigning NFL MVP has been vaccinated. (AP Photo/Rick Scuteri)

“Gnosticism reduced to bare narcissism,” the theologian David Bentley Hart says, “might be an apt definition of late modernity as a whole.” It certainly explains the case of Aaron Rodgers.

Rodgers, the quarterback for the Green Bay Packers and the reigning MVP of the National Football League, tested positive for Covid-19 and will not be allowed to play in a highly anticipated game this Sunday against the Kansas City Chiefs. Athletes getting placed on the Covid list is sadly a new pandemic reality, and this would only be a story for the sports pages were it not for one glaring wrinkle: Aaron Rodgers lied about his vaccination status and then ignored Covid safety protocols for unvaccinated players.

Instead of apologizing for misleading the public (it seems likely that his team and the league knew and provided cover), he is doubling down. He joined “The Pat McAfee Show” on Friday to lament that he is in the “crosshairs of the woke mob” and being unfairly maligned and lied about by the media.

Rodgers’s appearance on “The Pat McAfee Show” came across like the ramblings of someone deep into online conspiracy theories who finally has to talk about it offline. As Daniel Kreps put it in Rolling Stone, he fills up “a Bingo card’s worth of anti-vaxx catchphrases: Ivermectin, ‘politicized,’ ‘my own research,’ a Martin Luther King Jr quote taken out of context (‘You have a moral obligation to object to unjust rules’), ‘monoclonals,’ ‘sterility,’ and more.”

Aaron Rodgers has provided a powerful reminder that religious problems like clericalism and gnosticism are not confined to the religious world.

Aaron Rodgers has provided a powerful reminder that religious problems like clericalism and gnosticism are not confined to the religious world.

While everything that Rodgers said on the show already has been refuted several times by people smarter than I, it is worth unpacking the personal and spiritual disposition from which he is operating, and the label he seems particularly offended by: that he is selfish.

I don’t believe that all or even most people who remain unvaccinated are selfish. But Aaron Rodgers definitely is.

“I believe strongly in bodily autonomy,” Rodgers explains. “I just wanted to make the decision that was best for my body,” he further expounds, feeding the lie that health is a purely personal choice. As Pope Francis has said, getting vaccinated is an act of love, but not just of self-love: “Love for oneself, love for our families and friends, and love for all peoples. Love is also social and political.” Health is also a social and a political issue; our personal health decisions affect our friends, our families and our larger society—especially its most vulnerable members.

I don’t believe that all or even most people who remain unvaccinated are selfish. But Aaron Rodgers definitely is.

Rodgers is also offended at the idea that he should have to alter his life at all if he is unvaccinated. He seems to think that all the health protocols are specifically there to shame him, personally, instead of as public health measures: “It didn’t make sense from a science level, it was more trying to make us have the least fun year possible.”

Getting the nation’s vaccination rates up (right now 68.1 percent of people 12 and older have two doses of an approved vaccine) would be a lot easier if all of our cultural role models could be deployed in a PSA-style campaign. Instead, some of the most popular athletes in sports (the professional basketball player Kyrie Irving and Rodgers are the most prominent) suck up all the media oxygen and exhale run-of-the-mill talking points against vaccination. Meanwhile, the N.F.L and N.B.A. have extremely high vaccination rates, at 94 and 95 percent, respectively.

Rodgers was able to marshal “several” medical individuals, “including M.D.s” (and presumably several non-M.D.s, like, uh, Joe Rogan?), at, as he complains, his own expense, to produce a massive report to get an exemption to the league’s vaccine mandate. Surely, if he believes in the content of his own research, shouldn’t he make it available to the public? Wouldn’t it better the lives of other people looking for non-vaccination ways to treat and prevent Covid-19? “I think a lot of people would enjoy seeing that,” Pat McAfee remarks.

Rodgers isn’t interested. “The specific protocol I’m just going to keep between the doctors and myself.”

This is the fundamental difference between science and whatever Aaron Rodgers is pursuing: gnosticism. Science changes. It takes in new data. It asks new questions. But fundamentally, it stands in contrast to an individualistic, gnostic approach. Studies are submitted to peers to poke and prod and question. Science is not infallible, or inherently moral, but at its best it is deployed on behalf of the common good. Gnosticism, on the other hand, as it tends to appear in the history of Christianity, says secret specific knowledge granted to a precious few offers the path to truth or to salvation.

Professional athletes suffer the same temptation as Catholic priests: the admiration of others that can lead to an inflated sense of one's importance. For priests, this is the result of clericalism. For athletes it is more like idolization. From the time they are young in their training, they are set upon a pedestal, told they are exceptions to the rules, that they are in a separate class from the rest of us. Jason Concepcion, a writer and podcaster, put it well in a Tweet: “elite athletes are cosmic genetic lottery winners who, over the course of their lives, have had people tell them ‘you'll never be a pro—pick a realistic career’ so perhaps it's not a surprise that they think stuff like ‘science’ and ‘medicine’ dont actually apply to them.”

And what happens to a person suffering from something like clericalism? Pope Francis has called it one of the “worst evils,” and that if the church doesn’t root it out, then “we are creating little monsters. And then these little monsters mold the people of God.”

Aaron Rodgers is more popular than any priest; his Sunday pulpit reaches for more people than any preacher. How many of the people of God that idolize football’s high priest, the reigning MVP, will suffer because of his actions?