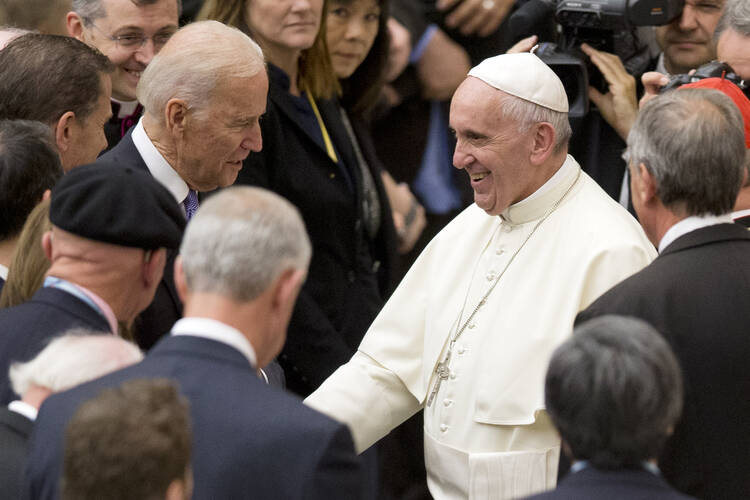 In this April 29, 2016, file photo Pope Francis shakes hands with Vice President Joe Biden as he takes part in a congress on the progress of regenerative medicine and its cultural impact, being held in the Pope Paul VI hall at the Vatican. (AP Photo/Andrew Medichini, File)

The summit includes the leaders of the world’s top 20 economies, which represent 60 percent of the world’s population and 80 percent of its global economy in terms of G.D.P. Each has asked to meet with the pope before the summit, a sign of his global standing as a moral authority.

Presidents Biden and Moon are both Catholic, the second Catholic presidents of their respective countries. Pope Francis has met each of them before, but it will be the first time that he meets Biden as president. Prime Minister Modi is Hindu, and it is his first meeting with Francis. Each will engage in a private conversation with the pope, which is expected to last from 30 to 60 minutes.

It will be Mr. Biden’s fifth meeting with Francis. They first met on March 19, 2013, when as vice president he headed the U.S. delegation for the pope’s inauguration. They met at least twice during Francis’ 2015 visit to the United States, both in Washington and in Philadelphia, and they met a fourth time when the vice president came for a meeting at the Vatican.

This, however, is the first time that Mr. Biden, 78, will meet Pope Francis, 84, as president. Francis will welcome him at the door of his private library at midday, Oct. 29, and the two leaders will then enter the library on the second floor of the apostolic palace and engage in a private, face-to-face conversation with the aid of interpreters. They have much to discuss in less than one hour. President Obama had a 50-minute private conversation with Pope Francis; President Trump had 30 minutes.

Sources in Rome expect President Biden and Francis to focus on the global issues that both leaders consider to be of major concern to humanity at this moment in history.

Sources in Rome expect President Biden and Francis to focus on the global issues that both leaders consider to be of major concern to humanity at this moment in history.

The White House press secretary, Jen Psaki, mentioned some of these in a statement on Oct. 14: “They will discuss working together on efforts grounded in respect for fundamental human dignity, including ending the Covid-19 pandemic, tackling the climate crisis, and caring for the poor.”

Sources in Rome expect other issues to feature on the agenda, including migration and the crises in the Middle East, especially in Lebanon and Syria.

That same Friday morning, before meeting President Biden, Pope Francis will receive South Korea’s President Moon, 68, in a private audience at 10:00 a.m. They last met on Oct. 18, 2018, when the president, who has been very active in promoting peace and reconciliation with North Korea, brought a verbal message from the northern leader, Kim Jong-un, inviting Francis to visit Pyongyang. However, Mr. Kim never formalized the invitation in writing despite the pope’s willingness to go there.

Sources in Rome expect other issues to feature on the agenda, including migration and the crises in the Middle East, especially in Lebanon and Syria.

Pope Francis and President Moon will discuss the major topics of concern to both sides, including the peace process on the Korean peninsula, something Francis has been keenly interested in since he visited South Korea in August 2014.

They are also expected to discuss the pandemic, which South Korea has had much success in controlling, and making vaccines available to poor countries. They will almost certainly address the climate crisis and COP26, and Mr. Moon is likely to mention the tension caused by China through its increasingly aggressive activity in the region.

After his meeting with the pope, Mr. Moon will have conversations with Francis’ senior advisors on global affairs, Cardinal Parolin and Archbishop Gallagher.

The next morning, Saturday, Oct. 30, Pope Francis will welcome the 14th prime minister of India, Narendra Modi, 71, who has led the world’s largest democracy since 2014. India is a country of 1.4 billion people, but in 2019 the United Nations reported that 28 percent of the population are poor and largely uneducated. The pandemic will have increased the number of poor people in this vast country.

The question of combating poverty and educating the people is an issue that Pope Francis and Mr. Modi are concerned about and will likely discuss. The pandemic and how best to overcome it, especially in poorer countries, is another issue of common concern. Nearly half of India’s population has received one shot of the Covid-19 vaccine, while 19 percent have received two. But more than 456,000 of its people have died from the virus, even though India is a major producer of vaccines.

An issue that greatly concerns Pope Francis, Vatican officials and India’s bishops are the attacks against Christians in 21 of India’s 28 states.

An issue that greatly concerns Pope Francis, Vatican officials and India’s bishops are the attacks against Christians in 21 of India’s 28 states, most of them ruled by Mr. Modi’s pro-Hindu Bharatiya Janata Party. UCA News reports that the B.J.P. supports the hardline idea of making India a nation of Hindu dominance, which Christian leaders say results in Hindu activists violently opposing religious minorities like Christians and Muslims. Eighty percent of Indians are Hindu (966 million), 13 percent are Muslim (172 million), 2.3 percent Christian (28 million, including 20 million Catholics), and there are tiny minorities of Sikhs, Buddhists and Jains.

This issue of violence against religious minorities is likely to be raised with Mr. Modi by the pope and Archbishop Gallagher. So, too, is the question of climate change. (Cardinal Parolin will not be in the Vatican for the meeting with the Indian leader because he will be on his way to Glasgow for the COP26 summit).

The Vatican is hoping that Mr. Modi will extend an invitation to Pope Francis to visit India. The Indian cardinals have visited the prime minister on several occasions over the past seven years and tried to get him to invite the pope. But while he appeared to be favorable, he never issued the invitation, it seems, because of opposition from within the B.J.P. and from Hindu fundamentalists. Pope Francis has publicly expressed his desire to visit the country, but the decision to invite him rests with Mr. Modi. It remains to be seen whether he will do so when the two leaders meet on Saturday morning.