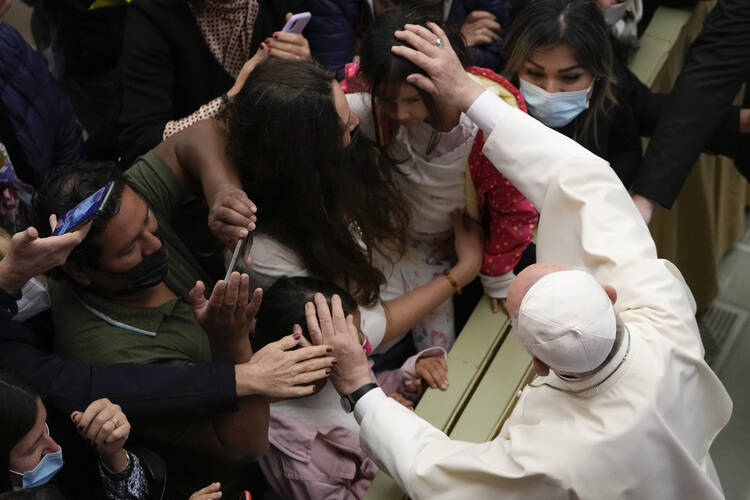 Pope Francis greets people at the end of his weekly general audience in the Pope Paul VI hall at the Vatican, Wednesday, Oct. 20, 2021. (AP Photo/Alessandra Tarantino)

VATICAN CITY (RNS) — In a message read by his secretary of state to a women’s advocacy group meeting ahead of the G-20 summit, Pope Francis called for greater female leadership in world affairs on Monday (Oct. 18), telling the Women’s Forum G-20 that “our world needs the collaboration of women, their leadership and their abilities, as well as their intuition and their dedication.”

Cardinal Pietro Parolin, the Vatican’s secretary of state, read the pontiff’s message by video to a special two-day gathering in Milan of the Women’s Forum for the Economy & Society, founded by Publicis public relations to highlight women’s voices in government and diplomacy.

The forum is taking place days before the summit in Rome of the heads of state of the world’s largest economies. Before the event, Francis is scheduled to meet with U.S. President Joe Biden for the first time since his election.

The Catholic Church has a complicated track record on the question of women’s participation and leadership. While there is no shortage of strong female figures in the church, some lament the lack of women’s involvement in decision-making in an institution that doesn’t allow them to become priests, bishops, cardinals or popes.

While there is no shortage of strong female figures in the church, some lament the lack of women’s involvement in decision-making.

In the message, Francis quoted his predecessor St. John Paul II, who in 1995 wrote a letter to women, “Mulieris Dignitatem,” that was interpreted by many as a manifesto for further female inclusion in the church. (John Paul II was also responsible for answering with a definitive “no” the question of female ordination.)

Francis opened two commissions, one in 2016 and another in 2020, to study the possibility of allowing women to become deacons — clergy who can preach but cannot perform the sacraments. Since becoming pope, he has appointed more than a dozen women to positions of influence and leadership in the Vatican.

In early October, the pope launched a two-year synodal process, in which the faithful will be called to discuss, debate and express their views on the most pressing issues facing the Catholic Church. When the world’s Catholic bishops convene in Rome in 2023 to vote on the issues raised in the process, only one woman, Sister Nathalie Becquart, whom Pope Francis appointed as undersecretary to the synod of bishops, will be allowed to vote.

The contribution of women is essential “in the efforts for the care of our common home.”

The message Parolin read quoted some of Francis’ earlier speeches praising “the irreplaceable contribution of women in building a world that can be a home for all” and their ability to be “concrete and know how to weave life’s threads with quiet patience.”

It is with this constant weaving, it said, that women promote a sense of “selflessness” that is capable of looking beyond the myopic approach solely centered on immediate profit. The contribution of women is essential “in the efforts for the care of our common home.”

While the pope noted men’s and women’s “respective characteristics,” his message said both sexes are “called to embrace their common vocation to be active builders of society.”

The pope’s speech ended with an emphatic appeal calling for the education of every girl in the world: “I would like to seize this opportunity to reiterate a strong encouragement that every girl and young woman in every country may have access to quality education so that each of them may flourish, expand their own potential and talents, and dedicate themselves to the development and progress of cohesive societies.”