Colin Powell was a warrior — with a healthy skepticism of war. 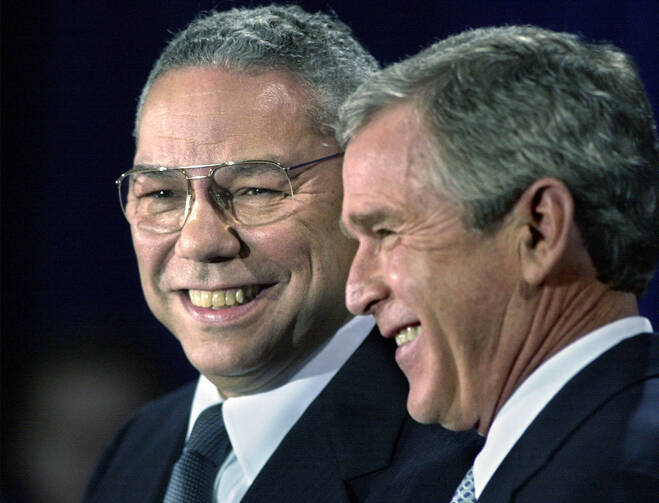 In this Dec. 16. 2000 file photo, President-elect Bush smiles as he introduces retired Gen. Colin Powell, left, as his nominee to be secretary of state during a ceremony in Crawford, Texas. (AP Photo/David J. Phillip)

At his death on Oct. 18, Colin Powell stood among the top ranks of American soldier-statesmen, with Presidents Washington, Grant and Eisenhower. Powell stood alone, however, as the first African American to hold the positions of national security adviser, chairman of the joint chiefs of staff and secretary of state. Presidents Ronald Reagan, George H. W. Bush and George W. Bush deserve credit for advancing his career.

Mr. Powell’s great misfortune was to serve as secretary of state among “the Vulcans,” the bloody-minded Republican policy-makers like Condoleezza Rice, Richard Perle, Paul Wolfowitz and Douglas Feith. Together with Vice President Dick Cheney, his aide Scooter Libby and Secretary of Defense Donald Rumsfeld, they subverted Mr. Powell’s more moderate policies and outmaneuvered his initiatives.

Colin Powell’s great misfortune was to serve as secretary of state among “the Vulcans,” the Republican policy-makers who  subverted Mr. Powell’s more moderate initiatives.

The Vulcans were fixated on the use of force as the primary instrument of U.S. power. Here’s an example of unnecessary opposition to a pacific initiative. In the early 2000s, with the backing of the White House and Mr. Powell’s office, quiet efforts were underway to facilitate Vatican-China relations. (Col. Larry Wilkerson, Mr. Powell’s chief of staff, was part of the effort.) As a sign of bona fides, an initiative was proposed to send Navy doctors to examine some of the senior Chinese leadership. Despite White House backing and State’s involvement, Undersecretary of Defense Feith ham-handedly suppressed the effort.

While Colin Powell had a strong warrior ethic, he often showed the moderation of a battle-scarred warrior. His Powell Doctrine expounded rules that made it difficult to commit troops and gave thought to how they would depart the battlefield. These rules were a barrier against military adventurism. At the beginning of the Second Gulf War, he famously cited the Pottery Barn Rule, “You break it, you own it.” It was prophetic advice that went unheeded.

In the first Gulf War, he saw the carnage of the retreating Iraqi army along the “Highway of Death” and shared in the decision for allied forces to relent in their pursuit of Saddam Hussein’s forces and hold back from advancing on Baghdad.

While Colin Powell had a strong warrior ethic, he often showed the moderation of a battle-scarred warrior.

A Pentagon admiral overseeing personnel matters during the ’90s described Mr. Powell to bishops’ conference staffers as a Vietnam-era officer who, because of the atrocities of that war, like My Lai, was committed to the laws of armed combat and training in them. She contrasted him to the new generation, who lacked the same sense for military restraint.

Make no mistake, Mr. Powell was a warrior, committed to a warrior ethic. When the U.S. bishops were preparing their statement “The Harvest of Justice Is Sown in Peace” in 1993, Mr. Powell came to testify to the U.S.C.C.B. international policy committee. It was the time of the break-up of the former Yugoslavia. Following pronouncements by Pope John Paul II, there was a great deal of interest in humanitarian intervention. Mr. Powell didn’t share that approach to the use of the military. “Blue helmets,” he said scornfully, “we leave that to the Scandinavians and the Dutch.” Americans, he believed, were warriors.

His resistance was born partly out of the failure of the U.S. humanitarian intervention in Somalia toward the end of the first Bush administration. But despite advice from diplomats, who counseled against entering Mogadishu and for feeding the hungry outside the city, Mr. Powell had insisted on a full-scale military invasion of the city, assaulting the beaches in classic style, and on direct confrontation with the Somali militias, resulting in the “Blackhawk Down” debacle. The Somali fiasco was not the result of undertaking a humanitarian operation, but rather of attempting to do it heavy-handedly with all-out military force.

The other side of Mr. Powell’s prudential restraint was a conviction that once engaged, the military had to use all-out force.

The other side of Mr. Powell’s prudential restraint was a conviction that once engaged, the military had to use all-out force. That conviction came to full expression in the opening days of the 2003 invasion of Iraq with the tactic of “shock and awe.” The military doctrine came from others, but Mr. Powell was a vocal exponent.

“The Harvest of Justice” cited the doctrine of shock and awe as a challenge to the practice of just war. The bishops wrote, “[S]trategies calling for use of overwhelming and decisive force can raise issues of proportionality and discrimination. Strategies and tactics that lead to avoidable casualties are inconsistent with the underlying intention of the just-war tradition of limiting the destructiveness of armed conflict.” They added, “In light of the preeminent place of air power in today's military doctrine, more reflection is needed on how traditional ethical restraints should be applied to the use of air forces.”

In a time of drone attacks and cyberwarfare, “shock and awe” and overwhelming air power seem passé. But in his concluding report, John Sopko, the special inspector general for Afghanistan reconstruction, identified the mismatch between what has been called the American way of war, with its heavy emphasis on materiel and technology, and the struggle against the Taliban as a principal cause of the American loss of that 20-year war.