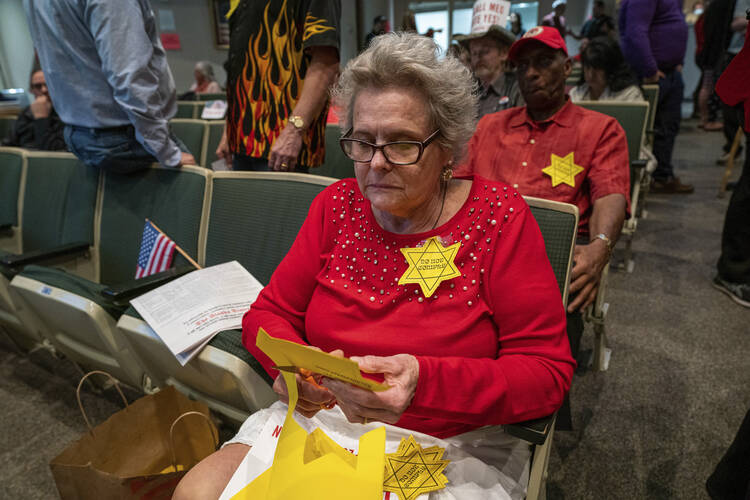 Christine Hill cuts out yellow Stars of David before an Anchorage Assembly meeting about a proposed mask mandate on Sept. 29, 2021, in Anchorage, Alaska. (Loren Holmes/Anchorage Daily News via AP)

At one of the earliest rallies in Berlin against Covid-related restrictions, in August 2020, protesters of mask mandates, physical distancing and lockdown requirements found themselves next to shocking allies: neo-Nazi skinheads. Ironically, this event was also one of the first to feature the inaccurate and offensive appropriation of the Holocaust as a comparison to measures imposed by many governments to protect citizens during the Covid-19 pandemic.

Here in the United States this past May, a Nashville hat shop called HatWRKS advertised yellow Star of David patches emblazoned with the words “Not Vaccinated,” then withdrew them from sale after a public outcry. And in June, Congresswoman Marjorie Taylor Greene, a Republican from Georgia, told an interviewer that “we can look back at a time in history where people were told to wear a gold star, and they were definitely treated like second-class citizens, so much so that they were put in trains and taken to gas chambers in Nazi Germany.” (Like the hat shop, the congresswoman later apologized.)

A Nashville hat shop advertised yellow Star of David patches emblazoned with the words “Not Vaccinated.”

In July, the Oklahoma Republican Party posted a yellow Star of David bearing the word “unvaccinated” on its Facebook page as part of its campaign against vaccine mandates. Aida Nozick, the executive director of the Jewish Federation of Tulsa, told the Tulsa World newspaper that the use of the yellow star was “moronic” and “hugely inappropriate.”

Grandstanding politicians and school board meeting attendees refusing to wear masks are not the only ones using these offensive comparisons. Melody Lyons, a Catholic mother of eight who runs a popular Catholic blog and Instagram account, has posted several Covid-related criticisms invoking the Holocaust. In August, Ms. Lyons wrote that Hitler “was a neurotic germaphobe” and was able to “convince a nation to submit to his neurosis” by appealing to “the noble goal of ‘public health,’” leading to forced sterilizations and restrictions on the “unclean.” She also claimed that Nazi Germany developed tuberculosis vaccines on child subjects who were “dissected and then murdered.” This is, of course, not true. While there were horrific medical experimentations on children during the Holocaust, some involving tuberculosis, there was no vaccine developed in this way.

[Related: Vaccine mandates are coming. Catholics have no moral reason to oppose them.]

Finally, Bishop Athanasius Schneider, an auxiliary bishop of Astana, Kazakhstan, who is an outspoken critic of Pope Francis, went as far as to claim that falsifying Covid vaccination cards would be morally justifiable. “I would compare this situation with the immoral laws when some totalitarian governments issued immoral orders against the Jews,” he told LifeSiteNews. “We know that Pope Pius XII and the bishops, when the Jews were persecuted by the Nazis, permitted the use of fake documents to protect the Jews. It was allowed because the laws against the Jews were intrinsically immoral.”

To be blunt, there is no comparison between being asked to wear a mask in stores and schools and being forced to wear a yellow Star of David in Nazi Germany. Covid restrictions bear no resemblance to being sent to concentration camps and either being killed immediately or being worked to death.

So why are these comparisons being made? Perhaps some people genuinely do believe that vaccine mandates are somehow precursors to another Holocaust, but they should realize the ineffectiveness of their argument. “It totally belittles the magnitude of what the Holocaust was all about,” Father Satish Joseph, the pastor of three parishes in Dayton, Ohio, told me. “There is a level of immorality in comparing the two. One destroyed lives; the vaccine is to save lives.”

“There is a level of immorality in comparing the two. One destroyed lives; the vaccine is to save lives.”

Furthermore, “people died of diseases like typhus in the Jewish ghettos,” Father Joseph said, adding that vaccination was, in fact, part of the resistance movement against the Nazi regime. “People tried to get vaccines into the ghettos, so how would this symbol work against vaccines? It’s preposterous.”

Rabbi Abraham Cooper, associate dean and director of global social action at the Simon Wiesenthal Center, suggests that those with concerns about Covid mandates are actually shutting down discussion by making outrageous comparisons to Nazi Germany and putting forward wild theories about, for example, the vaccine turning people into magnets. “Once you get into the conspiratorial mindset,” Rabbi Cooper said, “you leave the space where you can have intelligent debates.”

Rabbi Cooper also warned that while those making these comparisons for the sake of their vaccine-critical stance may not realize it, neo-Nazis play a role in its origins and are happy to exploit the fears of the public to gain a larger platform for their hate. Most of the people wearing yellow stars, he said, “don’t realize they’re doing anything wrong, but the ones who started it certainly do.”

He added that comparisons to the Holocaust only serve to lower the tone of public discourse: “When you start jumping from what was a systematic, industrial-style genocide of an entire people based on the accident of their birth, and glom it onto any heartfelt debate, everybody loses.” 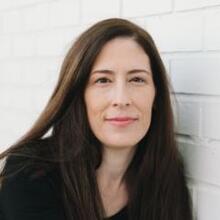 Jenn Morson is a freelance writer whose work has been featured in The New York Times, The Washington Post, The Atlantic and other news outlets.