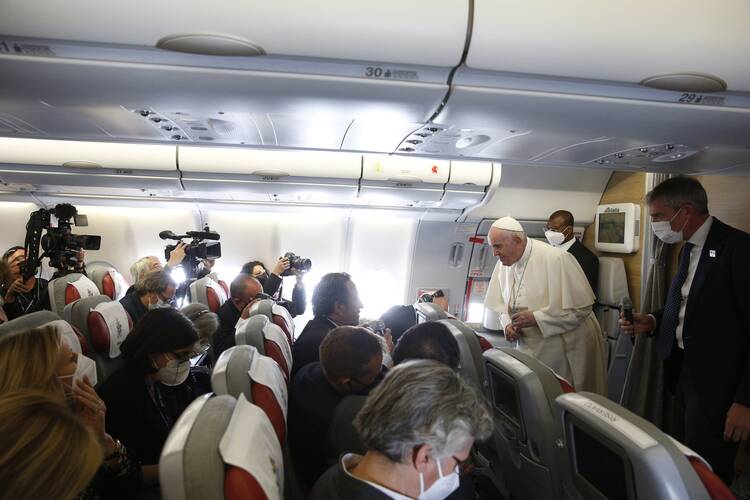 Pope Francis listens to a question as he speaks with journalists aboard his flight from Baghdad to Rome March 8, 2021. (CNS photo/Paul Haring)

Editor’s note: American politics have infiltrated the Catholic Church and are dividing the body of Christ. When Catholics adopt the prevailing secular categories of “right” and “left” they marginalize a central tenet of the faith: that truth is a person, not an idea. Matt Malone, S.J., the president and editor in chief of America Media, joins Gloria Purvis on “The Gloria Purvis Podcast” for a frank conversation on the constructive and destructive power of media in the Catholic Church today and why the goal of Christian discipleship is not about being right—it’s about being holy.

Matt Malone, S.J.: When I look out over the Catholic landscape, I see some things that are a lot better than 10 years ago. For one thing, I think the Catholic media have caught up with the digital revolution for the most part. Having developed [digital] platforms in addition to print, the Catholic media see opportunities that we didn’t see before. We can tell stories and look at issues and discuss things in such a more comprehensive way than we ever could before.

There’s always a role for print, but being able to do podcasts, video and engaging on social media presents us with opportunities to really look at an issue from every single angle. It also creates many different doors for people to walk through because not everybody wants to enter into the conversation in the same way.

The Catholic media see opportunities that we didn’t see before. We can tell stories and look at issues and discuss things in such a more comprehensive way than we ever could before.

One of the things that concerns me is something that I talked about soon after I came here to America. I wrote an essay called “Pursuing the Truth in Love,” which outlined America’s mission for the 21st century. One of the things that I talked about there was how polarization was wreaking havoc on the country but also on the church. We had imported these categories of left and right, and it was structuring our conversation.

GP: We see more and more of this distrust of the other, and it’s shocking to see that among those of us who would sit around the eucharistic table together. I’m hoping things like the discussions that we have on this podcast can be an antidote to that poison.

MM: Well, amen to that. At the end of the day, if you are a ministry of the church like America, then you participate in the one ministry of Jesus Christ, which is a ministry of reconciliation. And so we have to ask ourselves every day: What does that mean when you work in media? For us, it means this has to be a place where people come together, where people who ordinarily would not be together, or people who are estranged from one another because they belong to different political parties or different factions within the church, can come together and they can have a conversation that is civil and intelligent.

Now that sounds pretty straightforward. But the work of doing that gets harder and harder the more polarized the world gets.

MM: I think it comes back to our relationship with God and our relationship with Jesus. An insight of Pope Benedict’s that I come back to is when he was asked by Peter Seewald in an interview, “Does the Catholic Church possess the truth?” And, Pope Benedict said, “No.” He said, “We dare to hope that he possesses us because truth is a person: Jesus Christ, the way, the truth and the life.”

Being grounded in that relationship is what gives us the freedom to go out and be engaged in the work of dialogue and advocacy and so forth because, at the end of the day, it gives us the freedom to be wrong. Because if somehow being wrong about this or that issue means that we’re irredeemable, then we’re not going to be able to listen to anyone else. When you proceed from fear instead of faith, you’re closed off to the world.

GP: People have an obligation to speak the truth, not to try to twist it or obscure it or to have it lean toward any kind of particular political party. And I think something that’s missing in the broader media landscape, whether it’s Catholic or secular.

MM: Speaking that truth is why we’re here, right? That’s the motto of America Media: pursuing the truth in love. And that last part is so critical, isn’t it?

The fathers at the Second Vatican Council had this beautiful document, “Dei Verbum,” “The word of God.” In the opening paragraphs of that, they point out that Jesus Christ is both the means of God’s revelation and the content of God’s revelation. What that means, then, is that if what you are communicating and how you communicate it are the same for God, they have to be the same for us.

No matter how factually accurate the statement, no statement can be called in an ultimate sense “truthful” if it is not spoken in charity.

Matt Malone, S.J., is the President and Editor in Chief of America Media. Fr. Malone began his tenure on October 1, 2012. At the time of his appointment, he was the youngest editor in chief in the history of America magazine. He served for two years as an associate editor, from 2007-2009, when he covered foreign policy and domestic politics. He was the recipient of the 2006 first place Catholic Press Association award for essay writing. From 1995-1997, Fr. Malone was special assistant and speechwriter to U.S. Representative Martin T. Meehan (D-MA). From 1997-2002, he served as the founding deputy director of MassINC, an independent political think tank, and co-publisher of CommonWealth, its award-winning review of politics, ideas and civic life. His writing has appeared in numerous national and international publications and his work and ideas have been featured in The New York Times, The Boston Globe and The Washington Post among others. He is the author of Catholiques Sans Etiquette, a book concerning the church and the political, which was published in 2014 by Salvator Press in Paris.