This National Migration Week, see the humanity in those arriving at our southern border 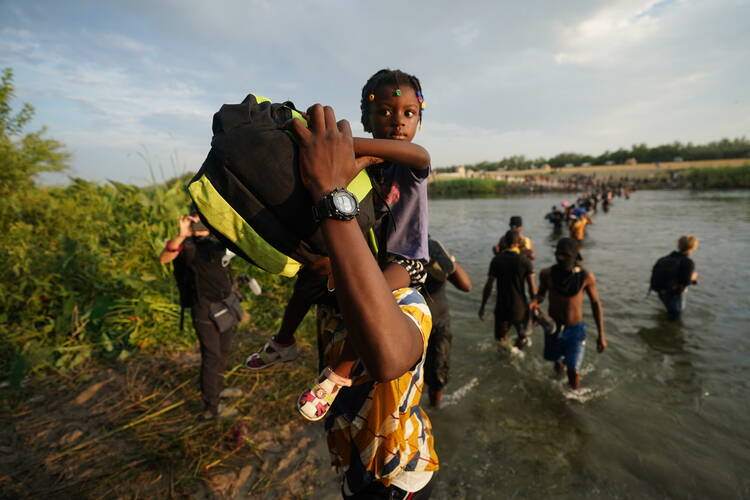 Migrants, many from Haiti, cross the Rio Grande from Del Rio, Texas, to return to Ciudad Acuna, Mexico, Tuesday, Sept. 21, 2021, to avoid deportation from the U.S. The U.S. is flying Haitians camped in a Texas border town back to their homeland and blocking others from crossing the border from Mexico. (AP Photo/Fernando Llano)

The work of Catholic Charities is not political. It is humanitarian.

That phrase reverberates in my mind as we enter National Migration Week, where for decades, the Catholic Church in the United States has examined the circumstances facing migrants, refugees, and victims and survivors of human trafficking.

The situation at the southern border is untenable. Our border enforcement and immigration systems strain during migrant surges. Just this week, another surge—this time Haitian migrants arriving in Del Rio, Tex.—places thousands of lives at risk in sweltering temperatures without proper sanitary conditions. Additionally, the reality that many Afghan refugees will likely live in tent cities for months at military bases across the United States and abroad while being processed needs to be quickly addressed.

Spend a few moments just looking at the images of the people. Look into the eyes of those who seek to come here. Try to understand their stories through those eyes. See the fear and the hope that coexist in them.

Not only is the immigration system broken, but the conversation around it is as well. Far too frequently, we become polarized. Some insist that America remain a nation of immigrants; others that it be governed by the rule of law. At Catholic Charities USA, we believe both can be true, and we urge lawmakers to work across the aisle to begin the critical effort needed to fix our immigration system.

Until then, we will do what our mission calls us to do as Catholics—see the humanity, not the politics. In announcing the World Day for Migrants and Refugees to be held on Sept. 26, Pope Francis cited his encyclical “Fratelli Tutti,” where he called on us to ensure that “after all this, we will think no longer in terms of ‘them’ and ‘those,’ but only ‘us,’” (no. 35) calling on Catholics to “cultivate communion in diversity” first within the church.

To live up to Pope Francis’ call, this week I urge you to re-examine your heart to feel the emotion of the newcomers. Do as I occasionally do. Mute the coverage of immigrants and refugees on your television. Pass over the newspaper stories. Instead, spend a few moments just looking at the images of the people. Look into the eyes of those who seek to come here. Try to understand their stories through those eyes. See the fear and the hope that coexist in them.

These are families so desperate to leave their homes that they put their children at risk to escape and leave with only the clothes on their backs, often in the dead of night. These are women who simply want the right to study and be recognized as equals. Like many of us, they are the faithful—desperate to seek a life without fear of reprisal for their beliefs.

The staff and volunteers at Catholic Charities member agencies across the country are doing God’s work and answering Pope Francis’ call. They see only an “us” in the United States as they care for the most vulnerable affected by natural disaster, food insecurity, homelessness and any life event that places them at risk. As one of the largest private providers of social services in the United States, we see the faces and we hear the stories. And we look daily into the eyes of those in need, including immigrants and refugees.

Jesus gives us a mandate to share his love with all people. He goes so far as to identify with the person being served, especially the hungry, the thirsty and the stranger: “Amen, I say to you, whatever you did for one of these least brothers or sisters of mine, you did for me” (Mt 25:40).

As we mark National Migration Week, urge your lawmakers to fix what is broken in our immigration system. And while we wait, let’s find the humanity in the newcomers we meet. 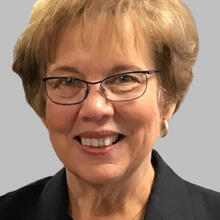 Donna Markham, O.P., Ph.D., is the president and C.E.O. of Catholic Charities USA. A member of Caritas Internationalis, C.C.U.S.A. is the national office for Catholic Charities agencies nationwide. To learn more about our work, please visit our website at www.catholiccharitiesusa.org.

@SrDonnaCCUSA
Show Comments ()
Join the conversation: Login or create an account
Before you can comment, you need to update your profile to include your first and last name, as required in our comments policy. Then reload this page and you'll be set up for commenting. Update your profile