Pro-life Catholics: You can’t end abortion without taking on the patriarchy. 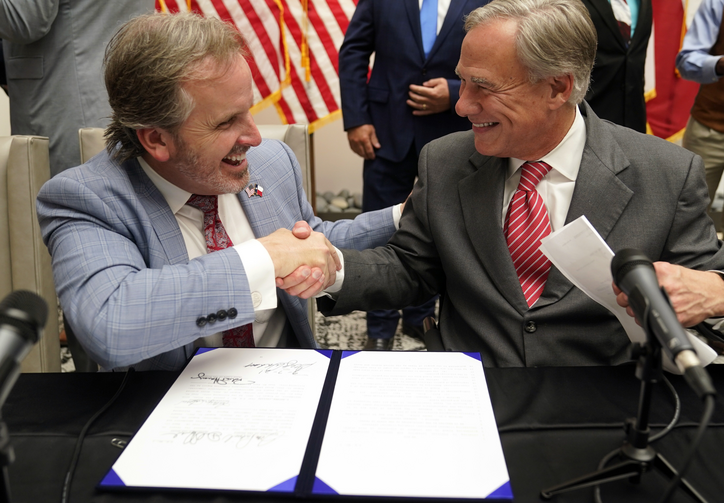 When the Supreme Court refused last week to overturn the Texas “heartbeat” abortion ban, known as S.B. 8, my Twitter feed filled with pro-life Catholics celebrating the ban for outlawing the killing of infants. And I could not not chime in.

I spent most of my childhood in a world shaped by the political theology of the evangelical and Catholic pro-life movement in the United States. I remember praying the rosary outside of a local Planned Parenthood with our homeschool co-op and then attending the March for Life with busloads of Notre Dame students in college. It is a belief system that was ingrained deep into my psyche, and I only began to question its political strategies and ultimate goals once I graduated from college and moved to New York City.

Just to be clear: I believe that a fetus in the womb is a person. The question of when human personhood begins is, let us admit, a mystery known only to God, since a soul is not a category of science but of faith. Catholic theologians differ in interpreting the available science of their time. Ultimately, I would err on the side of assuming personhood until proven otherwise. Acknowledging another’s personhood is never a bad idea; recognizing God’s image in another is never a statement of ideology but rather of radical, revolutionary unity.

Acknowledging another’s personhood is never a bad idea; recognizing God’s image in another is never a statement of ideology but rather of radical, revolutionary unity.

But the discussion of the earliest formations of human life in utero is not the discussion I want to engage in here. And, furthermore, I am suggesting that it is not the most fruitful or pertinent one in the current culture war around abortion in the United States.

I am suggesting that pro-life Catholics think as much about mores and social structures as they do about legislation. In order to achieve full justice on the issue of abortion, the moral discussion has to explore the personal and theological relationships that laws incarnate and reflect but cannot dictate.

What is radically apparent to me from discussions with close family members to the Babel of the Catholic Twittersphere is that too many Catholics do not understand or even seek to understand why abortion access in some form is so broadly supported in the United States.

I am suggesting that pro-life Catholics think as much about mores and social structures as they do about legislation.

Most Americans believe there should be some legal limits on abortion but that it should be available for women legally. So what are the 57 percent of Americans who believe abortion should be legal in all or most cases seeing that pro-life Catholics are not?

Maybe what supporters of abortion in the United States recognize is how deeply patriarchal attitudes about sex are ingrained in our culture, how little control women have over when and how they have sex—even with partners they love. Maybe they see the immense pressures a patriarchal culture places on women to have sex on a male timeline and its negative effects on women. Perhaps they are concerned about the horrifically high rates of domestic violence in this country. And the disturbing statistic that 1 in 5 American women will, at some point in their lives, be raped.

The Catholic Church has made it clear it stands in solidarity with unborn life. But in the three decades I have been a part of the church, I have seen it do little to address the abuse of women.

What are the 57 percent of Americans who believe abortion should be legal in all or most cases seeing that pro-life Catholics are not?

In my own life, I began to understand better the importance and necessity of feminist social critiques when I moved to New York City and experienced persistent street harassment.

Catcalling may seem trivial and not grave enough to incite some sort of philosophical awakening. But I would wager that anyone who minimizes the experience of constantly having men approach you and say whatever they want about your appearance, sexual desirability or body probably has never experienced it. And they certainly have never considered catcalling’s corollary—if men can say whatever they like, then they can do whatever they like.

If women talk about these experiences, they are sometimes accused of bragging about male attention or not being able to take a compliment—or a joke. There is also an ugly strain of racial history in which violence is done against Black men because of the complaints of white women.

I am conscious of that reality as I write this, but I think it is also blatantly morally obvious that the sexual objectification of women has no place in a just society. Objectification is a form of denying people personhood.

It is blatantly morally obvious that the sexual objectification of women has no place in a just society. Objectification is a form of denying people personhood.

I remember once walking down the street composing an essay about the incarnation and Caryll Houselander in my head when a man shoved his face close to mine and said something like “Nice ass” or the perpetual command, “Smile, beautiful.”

I was disturbed by the juxtaposition between the world I inhabited in my mind and the world my body inhabited. In my innocent, intellectual interior universe, I could be whatever I wanted. But on the outside, my body was—without my permission or assent—an object men could and would comment on.

I remember thinking: This is just not how you treat a person. All this stranger knew about me was that I was a woman and had a woman’s body. That was enough for him to know he had the right to say what he wanted.

Street harassment is just the tip of the iceberg of a deeper, broader system of objectification—domestic violence, sexual aggression, rape—which send the message to women that their bodies are not their own to control.

Street harassment is just the tip of the iceberg of a deeper, broader system of objectification that send the message to women that their bodies are not their own to control.

I remember working at a development event for the school I taught at as a young post-graduate staff-of-all trade. And I remember a wealthy donor putting his hand on the small of my back when he asked me a question. I also remember feeling like I couldn’t tell him to stop.

I don’t think anyone would have explicitly said to me, “Don’t tell a man he can’t put his hand on your back.”

But I felt that to tell him to draw a boundary would hurt his ego. It would somehow be perceived as offensive or rude or aggressive—another woman, yet again, misinterpreting an innocent gesture.

But as author Linda Kay Kleinsaid to me recently, implicit beliefs—not explicit teachings—are the most pernicious because you cannot argue against them. They poison the water you swim in.

The men on the street and the man in the grey suit both operated on an implicit belief that men have the right to treat me however they want to. Whether or not that treatment was spiritually, emotionally or physically good for me did not occur to them—or appear to concern them at all.

In the 5,000 Masses I have attended over the course of my life, I am not sure if I have ever heard this experience of objectification discussed.

In the 5,000 Masses I have attended over the course of my life, I am not sure if I have ever heard this experience of objectification discussed. I’ve heard powerful defenses of the personhood of unborn children but never condemnations of the sexism and abuse that attacks the personhood of their mothers.

Sexism is simply a manifestation of original sin and its fruit, concupiscence or libido dominandi: the desire to control or coerce another human rather than to see them as oneself, equal in form and dignity. To dominate difference rather than to embrace it.

Abortion has been in existence as long as people have gotten pregnant. Again, I do not think it is an ethical option. But in a society in which women can statistically be assured of unwanted sexual contact or abuse, to many, it seems like a necessary lifeline.

Until all structures of sexism are transformed and the patriarchal mores in our hearts and relationships are converted, there will always be unwanted pregnancies.

Abortion exists because women have yet to be recognized as people in a world that curtails their freedom, that stifles their autonomy through fear, threat of harm, shame, poverty, inequality.

To attempt to outlaw abortion without caring whether or not abortions will occur illegally or without caring why so many women see abortion as so essential to their freedom, health and happiness is shortsighted. And it is that blindspot that makes the pro-life political apparatus appear so misogynist and cruel to its political counterparts. A movement that wants to end abortions has to listen to the voices of women demanding change. It has to seriously consider why women—particularly impoverished women—see abortion as a necessity.

To think otherwise is wishful thinking.