In the wake of Hurricane Ida, Loyola New Orleans students have a new home—for now. 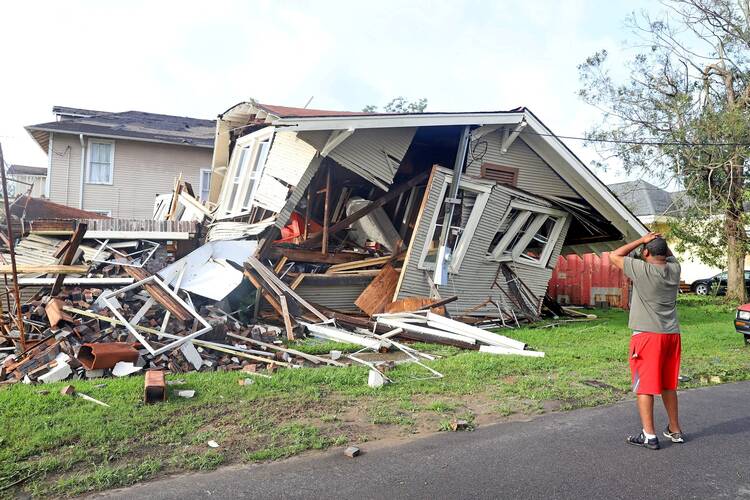 Dartanian Stovall of New Orleans, La., looks at the house that collapsed with him inside during the height of Hurricane Ida, Aug. 30, 2021. (CNS photo/Michael DeMocker, USA TODAY Network via Reuters)

After Hurricane Ida slammed into the Gulf Coast earlier this week, stirring up 15-foot storm surges and frying the city’s electrical grid, it seemed that students at Loyola University New Orleans had no place to go. But then another nearby Jesuit college stepped in to help.

Forced to evacuate from their home campus, approximately 150 Loyola students are temporarily relocating to Spring Hill College, located two states over in Mobile, Ala. The outreach is a testament to the close bonds that have developed between the two Jesuit institutions.

Despite the severity of the storm, Patricia Murret, a spokeswoman for the university, said that the campus suffered “minimal damage.” This was helped by the fact that many buildings on the century-old campus were designed to withstand Category 5 hurricane winds.

Additionally, there was relatively little disruption for most of the student body in the face of the storm. Because roughly 40 percent of students at Loyola New Orleans live in Louisiana, the majority of the university’s students were able to evacuate either to their own homes or to the homes of friends elsewhere in the state.

“​​We can’t wait to welcome our students back, but we are delighted they have such a nice place to stay while we wait for power to return to New Orleans,” said Tania Tetlow, the president of Loyola University New Orleans.

But 347 students who were unable to evacuate in time—including many international students—remained on campus.

These students remained “entirely safe and comfortable” in residence halls throughout the worst of the hurricane, Ms. Murret said. But as the storm clouds begin to draw away, they are now being moved to other locations like Spring Hill so that they will have access to running water, internet and electricity.

Beyond the evacuation efforts, a Student Hardship Fund and Digital Equity Fund developed by Loyola New Orleans to address students’ financial and technological hardships during the Covid-19 pandemic will also be put into action to help students in the aftermath of Hurricane Ida.

No matter which Jesuit school it is, “you will always feel connected to the place where you are, because we’re all operating on the same ethos.”

Tania Tetlow, the president of Loyola University New Orleans, offered thanks to Spring Hill for allowing students to shelter on their campus. “​​We can’t wait to welcome our students back, but we are delighted they have such a nice place to stay while we wait for power to return to New Orleans,” she said in a press release from the Association of Jesuit Colleges and Universities.

For his part, Spring Hill College president E. Joseph Lee said in the release that it was “an honor to assist the students, faculty, and staff from our sister Jesuit school.”

Afghan refugees and the Good Samaritans of Twitter
Shannon Last

“This is part of our tradition of service,” he added. “But most important, it’s following Christ’s example of helping those in need.”

This is not the first time that Spring Hill—among other Jesuit colleges—has helped out Loyola New Orleans in the aftermath of a natural disaster. When Hurricane Katrina pummeled Louisiana in 2005, the Association of Jesuit Colleges and Universities coordinated a response among its member institutions to help Loyola University New Orleans students.

In gratitude, Loyola New Orleans erected a bench in the shape of a hurricane featuring the names of other colleges and individual donors who supported the university in the wake of Katrina.

“This is such a beautiful thing,” Ms. Murret, from Loyola New Orleans, said of Spring Hill’s response. While Jesuit universities might differ in location or demographics, she said, they share a common Jesuit identity. No matter which school it is, “you will always feel connected to the place where you are, because we’re all operating on the same ethos.”