Is Joe Biden repeating the mistakes of the past in Afghanistan? Catholic commentators weigh in. 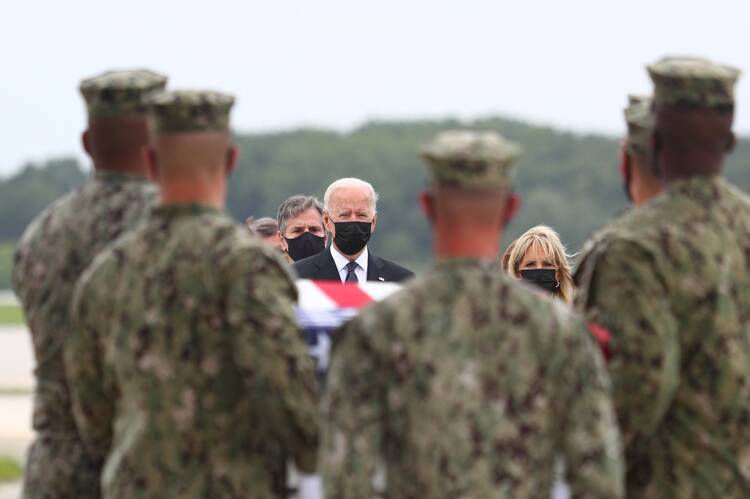 President Joe Biden attends the dignified transfer of the remains of U.S. Military service members at Dover Air Force Base in Dover, Del., Aug. 29, 2021, who were killed by a suicide bombing at the Hamid Karzai International Airport. (CNS photo/Tom Brenner, Reuters)

President Biden’s speech on Aug. 26, hours after an attack by suicide bombers at the airport in Kabul, was an opportunity for Catholics to reflect on the past 20 years of American involvement in Afghanistan. Reactions to the speech were mixed, with one veteran saying that the president rose to the occasion at a time of national mourning but a former America editor expressing discomfort with Mr. Biden’s promise to “hunt down” those associated with the attack.

While several academics agreed with Mr. Biden’s decision to withdraw troops from Afghanistan, one lamented that we seem to be living a “rerun” of the end of the Vietnam War, and another said that Mr. Biden was not improving on President Donald Trump’s “clumsy efforts” to end U.S. military involvement.

Peter Lucier: “These men and women said ‘Send me.’ There are no better words to capture the heroism of those who gave their lives to assist in this mission.”

Some praised the president for the speech overall. Peter Lucier, a Marine veteran and writer, said he was grateful for Mr. Biden’s words in tribute of the U.S. troops and Afghans killed during the effort to evacuate people from Kabul, saying, “They did not go to fight a war. They went to save lives.” Of Mr. Biden’s speech, he said, “In a time of national mourning, his invocation of Isaiah captured perfectly what I had struggled to put to words: These men and women said ‘Send me.’ There are no better words to capture the heroism of those who gave their lives to assist in this mission.”

For Drew Christiansen, S.J., a professor at Georgetown University and former America editor-in-chief, the speech was “a model of plain-spoken eloquence delivered with genuine, deeply felt emotion.”

But Daniel Philpott, a professor at Notre Dame University, while describing the speech as an “emotional and solemn tribute to the American soldiers who died in Kabul,” painted the challenge that nevertheless will persist after the United States withdraws its troops: “The Taliban will continue to harbor terrorists who will pursue attacks upon U.S. soldiers and civilians. It will continue to repress the religious freedom of Afghanistan citizens, including that of Muslims, Christians and members of other faiths. It will continue to deny women the opportunity to develop their talents. Religion will continue to matter in international affairs. Therefore, we will have to develop new strategies to defend our security and protect human rights.”

Phil Klay, a Marine veteran, professor at Fairfield University and writer, agreed that Afghanistan will continue to be an important focus of U.S. military policy. He wrote to America: “I have concerns about the shift in the war that Biden is signaling, and it is more correct to call the withdrawal a shift in the nature of the war than an end of the war, since he made absolutely clear that the counter-terror mission will continue. I did support the withdrawal, and still support it. But the way that America wages war now, in which we heavily rely on drones and special operators, in which we reserve the right to kill people around the world with extremely limited congressional oversight and very little transparency to the American public, disturbs me. These are long-running concerns for me, though, and [they] cross administrations.”

Phil Klay: “It is more correct to call the withdrawal a shift in the nature of the war than an end of the war, since he made absolutely clear that the counter-terror mission will continue.”

Joseph Capizzi, professor of moral theology at Catholic University of America, told America that, “Whatever one thinks of America's 20 years in Afghanistan, it is both a moral and political truth [that] our time there created obligations to Afghan allies who bravely assisted all aspects of our lengthy mission in their country…. No one could possibly be reassured by [President Biden’s] claim that upon our departure ‘we will find them and get them out.’ We're witnessing in slow motion the colossal failure of evacuating thousands absent sufficient American and allied forces to guarantee civilian safety. How could this get better when the few remaining troops are gone?”

Scott Appleby, a professor and dean at the Keough School of Global Affairs at Notre Dame who has worked with military and intelligence agency officials for over 20 years, wrote, “One view that I have heard consistently across the years, whoever the president was at the time, is frustration with the lack of clarity about our mission in Afghanistan, beyond the immediate response to the attacks of 9/11—its concrete goals and its precise role within U.S. grand strategy globally.”

For Tom Reese, S.J., political scientist, a senior analyst for Religion News Service and another former America editor-in-chief, the situation in Afghanistan “looks like a rerun.” Father Reese argues that the United States made “the same mistakes that we made in Vietnam…. We did not understand the history and culture of the country, we allied ourselves with corrupt political elites, we trained an army that could not stand up by itself, our generals and politicians lied to Congress and the American people about progress being made, and while we talked about winning minds and hearts, our military tactics [and] arrogance alienated the locals.”

Tom Reese, S.J.: The United States made “the same mistakes that we made in Vietnam.... We did not understand the history and culture of the country.”

Father Reese’s comments articulate a common view that the evacuation in Afghanistan, while not reflecting well upon Mr. Biden, speaks to broader patterns in U.S. history. Mr. Appleby, for instance, wrote America that while “Joe Biden consistently criticized this approach to Afghanistan as a Senator; as President, he surprised few close observers by following through on Trump's clumsy efforts to end our military presence in the country.” But he also argued: “That our withdrawal has been marked by chaos of its own, unnecessary loss of innocent lives, and the crippling of the hopes of millions of Afghan women and men, says less about the wisdom of Biden’s basic decision to withdraw, and more about the moral hazards and self-defeating hubris of American military overreach. Sadly, our nation has fallen into the trap identified by Clausewitz’s dictum that ‘War is the continuation of politics by other means.’”

Father Christiansen also noted the challenge of peace and reconciliation, and said of Mr. Biden’s speech: “​​I must confess one line troubled me. Patriotically, it is quite understandable. Rhetorically, it may have been the most memorable passage in the speech. But, for a Catholic in the time of Pope Francis, for a president who receives counsel from this pope, it was jarring. ‘We will not forgive. We will not forget,’ Mr. Biden promised. ‘We will hunt you down and make you pay.’”

Father Christiansen pointed out, “As a practical matter, the U.S. is already dealing with the Taliban, relying on it to police the approaches to the airport and to permit the safe evacuation of our troops and others.” He told America that he hopes “a de facto truce” can be the “threshold to a new relationship.”