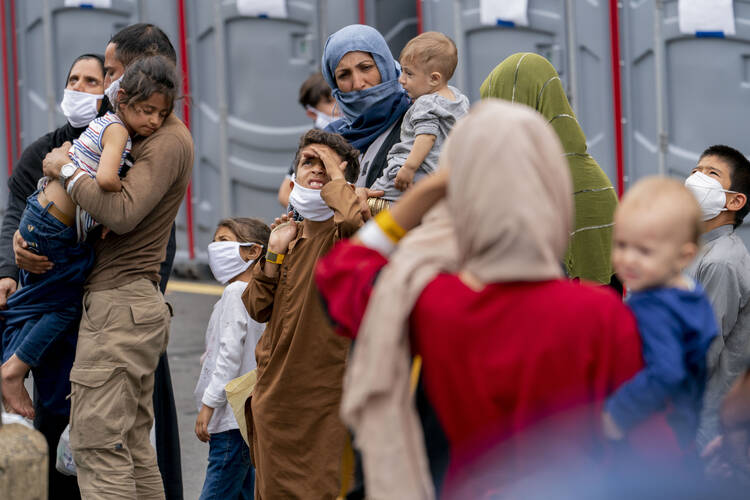 People evacuated from Afghanistan step off a bus as they arrive at a processing center in Chantilly, Monday, Aug. 23, 2021, after arriving on a flight at Dulles International Airport. (AP Photo/Andrew Harnik)

(RNS) — For the past two weeks, Ellen Smith has stopped most of her duties as executive director of Keeping Our Promise, a refugee resettlement organization. For most of August, her attention has been consumed by Afghanistan evacuations.

“Our work changed really overnight. A lot of volunteers have taken over what I usually do so I can focus on this,” she said.

Smith spoke to Religion News Service from her family’s cabin in Maine, where she was supposedly on vacation but has been working around the clock to help Special Immigrant Visa hopefuls in Afghanistan obtain documentation of employment and letters of recommendation to begin their applications for the program.

Smith described assisting a man in government intelligence who was trying to get his translator out of Afghanistan, but he was not allowed to write a memo of employment, due to security concerns. Smith recommended he speak to his congressional representative and see if he could write a memo through that person.

“It’s just not filling out a form for a lot of these cases. We need to think creatively and outside the box. In a case like that, I didn’t have an answer, but that was my suggestion,” said Smith.

The nonpartisan and nondenominational organization partners closely with a variety of churches, synagogues and faith-based organizations to help resettle people granted SIVs.

Originally a regional chapter of the No One Left Behind program, Keeping Our Promise started in 2014 after the regional chapter program ended. “Within an hour of learning of that decision, we decided to continue with our work,” Smith said.

The nonpartisan and nondenominational organization partners closely with a variety of churches, synagogues and faith-based organizations to help resettle people granted SIVs. This year, the groups have resettled 135 SIV families in Rochester, New York. They have a database of roughly 400 volunteers who assist with running thrift stores, helping SIV recipients find cars and bicycles, assisting SIV holders with job applications and furnishing apartments for families.

Several months ago, Keeping Our Promise trained Hearts and Homes for Refugees, a community sponsor program in Pelham, New York, to help refugees with the SIV application process. Since then, the Pelham group has been helping Afghans who didn’t have letters of employment verification proving they were employed by the U.S. and eligible for the visa program. Hearts and Homes has also submitted congressional inquiries into cases delayed over the nine-month maximum for processing.

Around Aug. 7, Hearts and Homes for Refugees’ inboxes were flooded. “About a week and a half ago, we saw a huge spike in the numbers of applicants asking for help,” said Hearts and Homes’ founder, Kathie O’Callaghan. “We realized they were not coming from Ellen. Word somehow got out that we were helping with paperwork.”

Covid-19 is not an excuse to keep out refugees. Biden must restore the asylum process.
Joan Rosenhauer

Originally a team of 10 volunteers, Hearts and Homes now has 50, according to O’Callaghan. The volunteers are mostly from the Westchester area — a local high school student on her summer vacation has volunteered full time to help with applications — but some U.S. expats in Indonesia and France have gotten wind of the effort and are volunteering their time.

Even so, O’Callaghan said the volunteers are very stressed. “They are on the other end of that line day in and day out, getting information, passing it on, reading the emails that are, I mean, I could tell you a lot of tears have been shed reading what we’re reading.”

O’Callaghan was inspired to begin Hearts and Homes for Refugees by her childhood Catholic church in Louisville, Kentucky, which hosted a Vietnamese refugee family of five during the 1970s.

In October 2015, during the Syrian refugee crisis, she started calling resettlement agencies in the area, the Archdiocese of New York and Catholic Charities to get involved. A year later, they put together a task force. The first family arrived in Westchester from Syria in January 2017, right before Donald Trump’s presidential inauguration and the travel ban.

O’Callaghan was inspired to begin Hearts and Homes for Refugees by her childhood Catholic church in Louisville, Kentucky, which hosted a Vietnamese refugee family of five during the 1970s.

“Without Catholic Charities, HIAS and our Jewish friends at synagogues, this movement would not exist,” said O’Callaghan.

Catholic Charities of New York connected O’Callaghan’s organization to an SIV family in Afghanistan who arrived in the United States this month. Hearts and Homes for Refugees said it is finalizing an apartment for the family. The family will be greeted with a culturally appropriate home-cooked meal. The organization’s tradition is for the most recently resettled family — in this case, an Afghan family who arrived in March 2020 — to cook the meal for the new arrivals.

“It’s been a very nonpartisan issue. It’s been about America and honor, and that these are the people who kept us safe. So who isn’t going to want to protect them?”

Despite the partisan rhetoric that surrounds refugee resettlement, O’Callaghan said she believes assisting with SIV resettlement can be a way of uniting Americans of all political persuasion.

“It’s been a very nonpartisan issue. It’s been about America and honor, and that these are the people who kept us safe. So who isn’t going to want to protect them?”

Once the SIV applicants can make their way through both the bureaucratic and physical barriers to the U.S., O’Callaghan said, she believes most communities will offer acceptance.

“I know there are community groups and people all over that are opening their arms. I've gotten so many emails saying: ‘What can we do? We want to help.’”