After the deadliest attack on Latinos in American history, Bishop Seitz called this evil by name: racism. 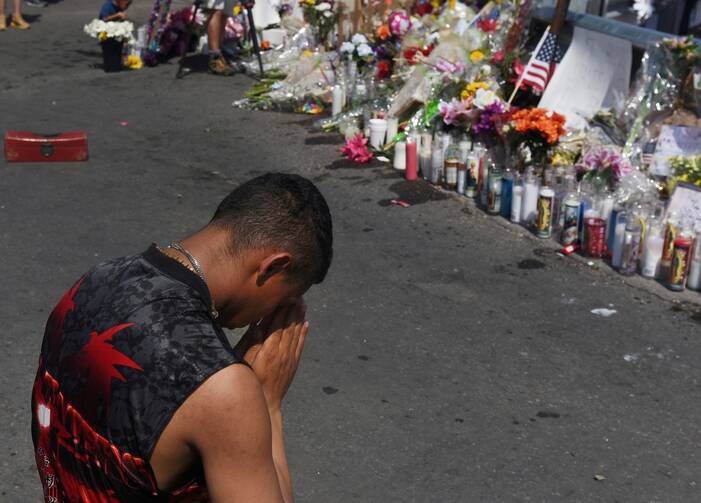 A man prays at a memorial Aug. 6, 2019, three days after a mass shooting at a Walmart store in El Paso, Texas. (CNS photo/Callaghan O'Hare, Reuters)

Editor’s note: On this week’s episode of the “Gloria Purvis Podcast,” Gloria speaks with the Most Rev. Mark J. Seitz, the bishop of El Paso, Tex. In August 2019, a white 21-year-old man shot and killed 23 people and injured 23 others in a Walmart in El Paso. The gunman published an anti-immigrant, white nationalist manifesto online before the attack and explicitly targeted those he thought to be Mexicans.

After the shooting, Bishop Seitz wrote a pastoral letter, “Night Will Be No More,” in which he directly confronts the evil of racism that led to that horrific day. In it he writes, “Challenging racism and white supremacy, whether in our hearts or in society, is a Christian imperative and the cost of not facing these issues head on weighs much more heavily on those who live the reality of discrimination.”

Gloria Purvis: People are very troubled by the term anti-racist, so help us understand what you mean by that term and how people should receive it when you say that we should be anti-racist.

Bishop Mark Seitz: It strikes me that one of the problems of racism, as is the case with so many sins, is that the sinner doesn’t recognize their part in the sin. They have to look within their own heart. They have to look at themselves with honesty to be able to recognize this within themselves. But if a person is truly not a racist, then at least that person needs to be concerned about the fact of racism in our society, about the fact that it’s present, that it’s baked into so much of the way that our society thinks. And as long as you deny it, then you are in a certain sense convicting yourself because it is present. I think that’s what moved me to write.

One of the problems of racism, as is the case with so many sins, is that the sinner doesn’t recognize their part in the sin.

I grew up in Wisconsin, and I really didn’t have any friends of color—they didn’t live where I lived. In many of our cities we just live in our little ghettos. And it’s easy in that environment to look at something like racism as an historical problem we read about in the history books. But we don’t see it. I didn’t see it. It’s taken something like this event to make me look up and say: “Oh my gosh. It’s not just something of the past.” This man acted because he was afraid that people who were white were going to lose their power, their possession of this country.

GP: What was your evolution on racism? How did you come to understand the reality of racism?

MS: The mass shooting was a very strong awakening because it hit me for this person to get to this point where somehow he thought it was O.K. to kill people of color—“kill Mexicans,” as he said—that he came out of a whole atmosphere that somehow legitimized, in his own mind anyway, this behavior.

Then I began to connect the dots and realize how political speech had opened the door to this. If you call the arrival at the border of hundreds of people who are seeking asylum an “invasion,” if you say they are bringing these diseases, these are all code words that bring a certain gut level response of fear and they’re calculated to do exactly that. When we make a person in our own mind an enemy—an other, an alien, an illegal—we don’t say they did something illegal. We say this person is an illegal. We’re automatically claiming that somehow their human dignity is not on the same level as ours.

When we make a person in our own mind an enemy—an other, an alien, an illegal—we don’t say they did something illegal. We say this person is an illegal.

These things began to be even clearer in my mind. I’ve had the opportunity to work with the Hispanic and Latino community, and now I can see what I couldn’t see before. I see how we stereotype and judge a whole people because of one reason: the color of their skin.

GP: When you call someone an illegal, it automatically makes them guilty of something and therefore they don’t merit the same kind of concern as someone who is innocent. We saw that play out with the murder of George Floyd. People pointed to his past brushes with the law, instead of being able to understand that regardless, he’s a person who is made in the image and likeness of God and worthy of dignity and respect. So there is this idea that someone has to be just like Jesus Christ himself—completely innocent—before we can be concerned. We want these “perfect” people. And I say, “perfect” with air quotes as if somehow we ourselves are “perfect.” And that’s what made God love us. No. Furthest thing from it. Yet, somehow we can’t extend that same loving attitude because we demand a certain perfection from other human people that God himself didn’t demand of us before he loved us.

MS: That’s a wonderful point. It’s so important to remember that the first person we look at who is a sinner should be ourselves. But, on the question of calling somebody illegal, what a lot of people don’t even realize is that many of the people they are calling illegal aren’t illegal because there’s a right to asylum. My primary involvement in terms of social justice concerns in most of my priesthood was not this issue. It was the pro-life issue, the issue of the unborn child. And for me, the parallels are unmistakable—how we fail to love the person we do not know, the person we have not seen, the person who’s at a different stage in their development.

To me, we’re doing the same thing to immigrants that our society has done to the unborn child.

To me, we’re doing the same thing to immigrants that our society has done to the unborn child. I think we as Catholic Christians have said: “No, I will love that person I have never met. I will stand for their life. I will support their mother in raising this child. I will, if necessary, take this child in myself. I will do whatever I have to do to save the life of this unborn child.” That’s what we need to be saying about our immigrant brothers and sisters to be consistent.

GP: At the end of your pastoral letter, after discussing this grave evil, you then asked that this man’s life be spared. You said, “Please do not execute him.” And to me, that was such an example of love. You invite people who have racist attitudes to come into the church and to put these things down. Your whole letter was an example of love. You never acted as if the people who committed these evils are beyond conversion and redemption. And then you end by inviting them, saying, “Come to us, be with us, we will love you.” I was blown away because sometimes people feel rage, but they misdirect it and they want vengeance. Instead of calling for their death, condemnation and expulsion from polite society, you invite us all to love.

MS: I was very angry when this happened, and I still can be. But I was taught what I wrote by the victims. I’ve never witnessed that kind of amazing Christian witness. I can’t speak for all of the victims, but one family I spoke with said: “We feel so badly for the family of the shooter. What must they be going through?” They themselves have said on many occasions that they don’t want him killed. How can I then be less Christian than that?

Listen to the entire conversation: