Migrants and refugees are victims of ‘cancel culture.’ The only antidote: authentic encounter. 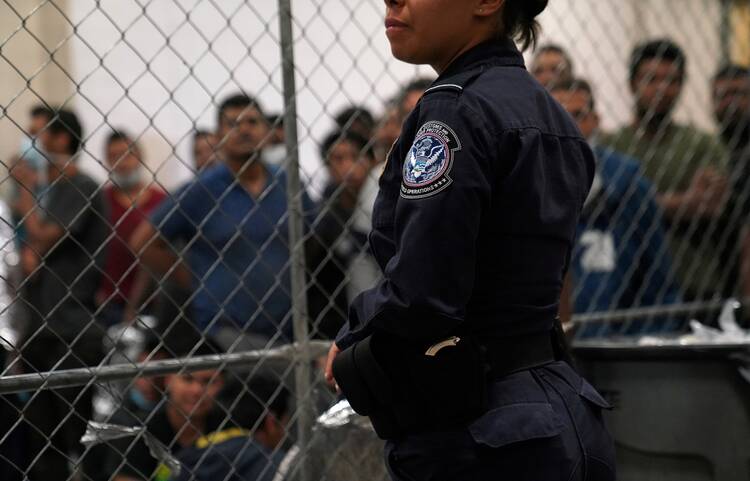 We have all heard the term “cancel culture” ad nauseum, to the point where no two people can agree on what precisely it means. But if “canceling” is a means of removing someone from public debate, or banishing to the shadows something that causes discomfort, then critics of “cancel culture” have missed an important point: Canceling is not necessarily problematic because popular censure limits the influence of certain public figures or ideas; rather, it is dangerous because it contributes to the exclusion of our most vulnerable neighbors. Our cultural inattention or neglect has canceled marginalized groups such as the elderly (isolated in nursing homes), the homeless (removed from public view whenever possible) and those exiled to prisons or detention centers.

Refugees and migrants at our southern border offer another example. We have canceled them in a way that threatens not their standing on social media but their very lives.

Even before Covid closed international borders, the plight of migrants got less of our attention. Out of sight, out of mind.

Federal and international laws recognize the right of people to seek asylum and to be treated humanely when they cross our borders (whether or not they do so with proper documentation at specified entry points), but the Trump administration implemented policies that systematically undermined these rights. These policies, combined with dehumanizing rhetoric, have convinced many Americans that the well-being of migrants and refugees is not “our problem.” If border crossings can be minimized, we are told, there is no border crisis.

When there is a debate over whether someone should be “canceled,” that individual actually becomes more famous, at least briefly. But then we get distracted by newer controversies. This is also true of our attention to marginalized groups. There was a huge public outcry over the family separation policy in 2018 and other revelations about the mistreatment of migrants during the first half of the Trump administration. But as restrictions made entry to this country all but impossible, even before Covid closed international borders, the plight of migrants got less of our attention. Out of sight, out of mind. And migrants have no platform from which to plead their case, unlike the media figures who complain about their supposed cancellations.

But a new surge of migration is demanding our attention. The Biden administration’s efforts to recognize the humanity of migrant people offer hope to those who have been desperate to find a place to live in peace, and this seems to be contributing to an increase in the number of migrants seeking entry. In February, border patrol agents encountered more than 100,000 migrants who crossed the border without documentation; this is the highest recorded number since 2019. Many of these migrants are children, traveling without a guardian.

We cannot, in effect, cancel our southern neighbors but instead must reckon with the claims those who are vulnerable make upon us.

Jen Psaki, the White House press secretary, acknowledged the surge by saying, “We are using every tool at our disposal, and we will use every official we can, to convey clearly this is not the time to come [to the United States].”

We must remember, though, that the “border crisis” has been ongoing. Although border crossings are increasing now, the struggles of migrants have remained constant. We cannot, in effect, cancel our southern neighbors but instead must reckon with the claims those who are vulnerable make upon us.

Our faith teaches that all people are endowed with dignity and have certain corresponding rights. As St. Pope John XXIII tells us, these include the right to migrate to a “political community where [they hope they] can more fittingly provide a future for [themselves] and [their] dependents.” He makes it clear that “as far as the common good permits, it is the duty of that state to accept such immigrants and to help to integrate them into itself as new members.”

The common good does not permit us to push migrants from our minds or to vilify them in an attempt to justify the erasure of their rights.

As we become alert again to the people at our border, it is critical that we respond in ways that affirm their dignity and are grounded in reality—rather than responding with fear or sowing derision. Policy development around this issue should attend to the legitimate concerns of involved parties, especially those of border communities and migrants themselves. Engaging in authentic dialogue is key to ensuring that rights are respected and needs met. Though some ideas or behaviors may be so repugnant as to warrant widespread public repudiation and rejection from public discourse, we should be inclined toward debate rather than automatically excluding what we find objectionable.

The antidote to the cancellation of the vulnerable is authentic encounter, which enables us to recognize the humanity—the imago dei—in those we have marginalized. As Catholics, we should exemplify such encounters and should direct the attention of our neighbors toward those considered “the least of these.” For in them, we find Christ.