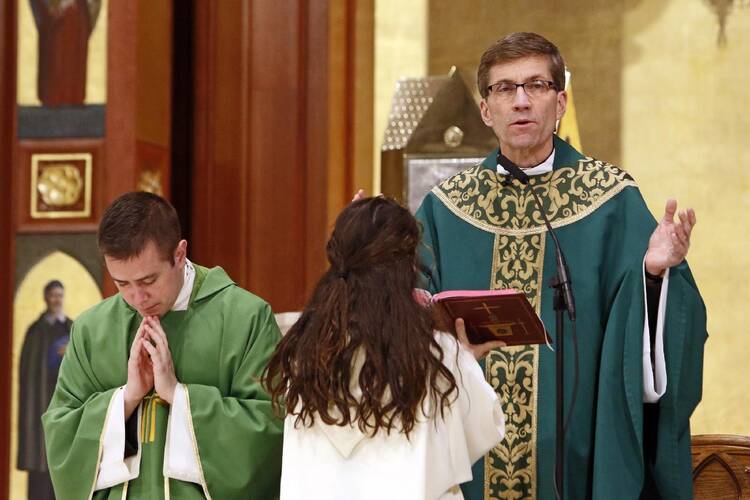 ROME (AP) — The newly appointed bishop of Joe Biden's home diocese in Delaware said Friday he would gladly speak with the president about his views on abortion but did not say whether he would allow him to continue receiving Communion, as his predecessor has.

During a news conference in which retiring Wilmington Bishop Francis Malooly introduced Monsignor William Koenig to his new flock, Koenig said he was open to having a conversation with the president on the issue and that as a bishop, he is called to teach “the fullness and the beauty of the Catholic faith.”

Monsignor William Koenig said he was open to having a conversation with the president and that as a bishop, he is called to teach “the fullness and the beauty of the Catholic faith.”

Koenig, 64 years old and a native of the New York City borough of Queens, is vicar for clergy in the diocese of Rockville Center, New York. He was ordained a priest in Rockville Center in 1983 and held a series of parish and diocesan positions before taking up his current post.

Koenig replaces Malooly, who at 77 is two years beyond the normal retirement age for bishops. Pope Francis accepted Malooly's resignation Friday and named Koenig as his replacement.

The appointment raised questions about Koenig's position on the Communion issue, with U.S. bishops set to consider in a June meeting whether to send a tough message to Biden and other Roman Catholic politicians saying they should not take the sacrament if they engage in public advocacy of abortion rights.

Biden, the second Catholic U.S. president, worships at his home in Wilmington and in Washington. Malooly and the archbishop of Washington, Cardinal Wilton Gregory, have both made it clear that Biden is welcome to receive Communion at churches they oversee despite his support for abortion rights.

In another U.S. appointment Friday, the pope named Monsignor James Golka of the diocese of Grand Island, Nebraska, to replace the retiring bishop of Colorado Springs, Colorado, Michael Sheridan.

Luis Andres Henao - Associated Press
Provide feedback on this article
Join the conversation: Login or create an account
Before you can comment, you need to update your profile to include your first and last name, as required in our comments policy. Then reload this page and you'll be set up for commenting. Update your profile