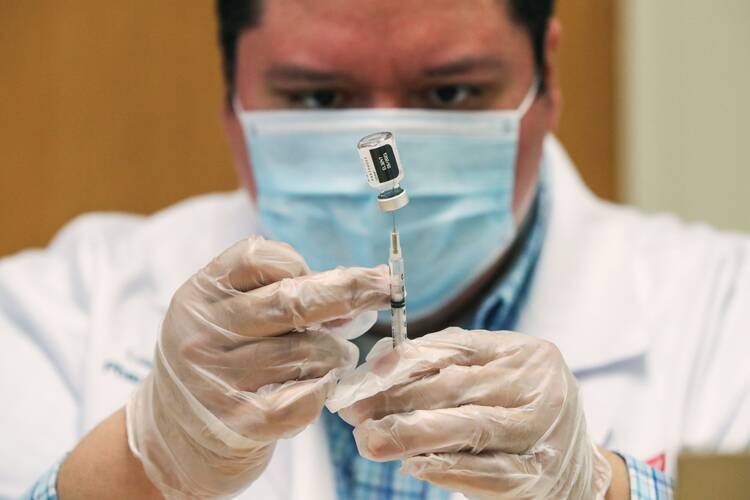 (RNS) — A new survey suggests faith leaders are key to combating vaccine hesitancy or outright anti-vaccine sentiment among religious Americans and QAnon believers, many of whom still voice concerns about getting inoculated against COVID-19.

Vaccine hesitancy is a growing concern for public health officials hoping to inoculate enough Americans to reach “herd immunity” — an inflection point where the raw number of vaccinated individuals makes it difficult for the coronavirus to spread. Although the White House recently announced more than half of U.S. adults have received at least one dose of a COVID-19 vaccine, estimates for what it will take to reach herd immunity are much higher, ranging from 70% to 90% of the population.

Recent reporting from Bloomberg suggests that despite the unprecedented national vaccination effort, health officials in some locations may be running out of people willing to get vaccinated, with appointments going unfilled in more religious areas such as Lynchburg, Virginia, home to Liberty University, an evangelical Christian school.

Health officials in some locations may be running out of people willing to get vaccinated, with appointments going unfilled in more religious areas.

Indeed, the PRRI/IFYC report warns that anti-vaccine sentiment is a factor within many religious groups, with white evangelicals the most likely to say they won’t get the shot (26%). Other Protestants of color are second (20%), followed by Black Protestants (19%), members of the Church of Jesus Christ of Latter-day Saints (17%), Hispanic Protestants (15%) and white mainline Protestants (13%). At the bottom of the list are religiously unaffiliated Americans (12%), Hispanic Catholics (10%), non-Christians (10%), white Catholics (8%) and Jews (5%).

The breakdown of religious people who are vaccine hesitant — meaning they either want to wait and see how the COVID-19 vaccines work or will only get vaccinated if required — is slightly different from those who anti-vaccine: Hispanic Protestants (42%) are at the top, followed by other Protestants of color (35%), Hispanic Catholics (34%), members of the Church of Jesus Christ of Latter-day Saints (33%), Black Protestants (32%), religiously unaffiliated people (28%) and white evangelicals (28%).

Most groups still report a majority of vaccine accepters, with the exception of Hispanic Protestants (43%), white evangelicals (45%), other Protestants of color (45%), Black Protestants (49%) and members of the Church of Jesus Christ of Latter-day Saints (50%).

Researchers at PRRI and IFYC say there is hope for public health officials angling to push people toward vaccine acceptance — namely, through faith-based campaigns and messages.

There is hope for public health officials angling to push people toward vaccine acceptance through faith-based campaigns and messages.

There is already faith-based momentum among Black Protestants, where nearly 6 in 10 (57%) who attend services at least a few times per year are vaccine accepters, compared with 41% among those who do not attend services.

Here, researchers see an opportunity: When asked if one or more faith-based approaches would make them more likely to get a COVID-19 vaccine, 38% of white evangelicals who are vaccine hesitant say yes, as well as 4% of vaccine refusers in that group. The numbers jump even higher — to 47% and 7%, respectively — among white evangelicals who attend religious services regularly.

Significant numbers of vaccine-hesitant Black Protestants (36%), Hispanic Catholics (33%) and white mainline Protestants (18%) also say they’d be more likely to get a COVID-19 vaccine if they were targeted by a faith-based approach.

Surveyors asked about six potential faith-based approaches in their survey, such as a religious leader encouraging them to get the vaccine, holding a forum to discuss vaccine safety at a religious location or getting the vaccine at a nearby religious congregation.

During a Thursday online event to launch the survey, PRRI research director Natalie Jackson noted variations among religious groups as to which faith-based approach appears most likely to combat vaccine hesitancy.

The White House has flagged challenges with appealing to white conservatives

“Among black Protestants, by far the most influential approach would be the forum on the safety of the vaccines.”

Robert P. Jones, head of PRRI, added that while some strategies could work better than others, the combined effect of multiple efforts could make an even larger difference.

“Even among a homogeneous group like white evangelical Protestants, each of these things picks up slightly different slices,” he said. “The cumulative effect is bigger than just any of these one of six.”

All the faith-based approaches are based on existing real-world efforts to get people vaccinated, many of which have been forged by partnerships between religious organizations and government officials. Prominent clergy — from bishops to imams to rabbis to activists — have been vaccinated in public across the country, such as when a group of faith leaders were vaccinated at the Washington National Cathedral in March during an event featuring National Institutes of Health Director Francis Collins and infectious-disease expert Dr. Anthony Fauci.

A significant portion of vaccine refusers—38%—say they are “generally agreeable” to QAnon conspiracy theories.

Faith leaders have also penned editorials voicing support for vaccines, offered up their sanctuaries as vaccine locations or participated in vaccine trials. And government officials have sought out religious groups to help overcome issues with vaccine access: Health experts in Washington, D.C., have partnered with Black churches to host mass vaccination days, and President Joe Biden visited a seminary in April that is working with a nonprofit organization focused on health equity.

At the launch event, IFYC founder and President Eboo Patel called for an expansion of faith-based vaccination sites and for additional data tracking religious opinions on vaccines. He also promoted the idea of faith-based community health ambassadors, which his group is working to recruit across the country.

Yet challenges remain. The White House has flagged challenges with appealing to white conservatives — including evangelicals. In April, White House press secretary Jen Psaki admitted to reporters that members of the Biden administration “won’t always be the best messengers.”

The issue is compounded with the preponderance of baseless conspiracy theories, such as those spread by the group QAnon. According to PRRI/IFYC, a significant portion of vaccine refusers — 38% — say they are “generally agreeable” to QAnon conspiracy theories such as the erroneous claim that the government is controlled by a group of Satan-worshipping pedophiles. In addition, 17% of vaccine hesitant respondents say they generally agree with QAnon theories.

And there’s a religious overlap: A solid 20% of white evangelical Protestants say they generally agree with QAnon conspiracy theories, as do 18% of Hispanic Protestants, 17% of Mormons, 16% of Black protestants and 16% of Hispanic Catholics.

Yet those who agree with QAnon conspiracy theories are also those most likely to overcome vaccine hesitancy using faith-based approaches: Among those who generally agree with QAnon conspiracy theories and who are vaccine hesitant, more than one-third (36%) say one or more of the faith-based approaches would make them at least somewhat more likely to get a vaccine.

After that, it’s vaccine refusers who remain the toughest sell: The survey reported that effectiveness of faith-based approaches does not vary significantly by QAnon conspiracy beliefs.