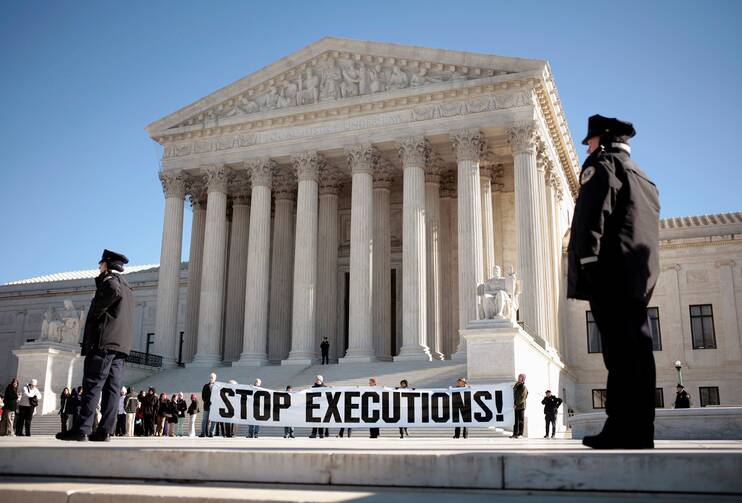 Protesters calling for an end to the death penalty unfurl a banner outside the U.S. Supreme Court in Washington. (CNS photo/Jason Reed, Reuters)

On Feb. 3, the Virginia Senate passed a bill to abolish the death penalty in the commonwealth. The House of Delegates followed suit this morning, Feb. 5, when they passed their own death penalty abolition bill with a floor vote. The Senate and House bills will go through the necessary reconciliation process before they are brought to Gov. Ralph Northam, who has already committed to signing. The governor has spoken publicly about the state’s history of putting innocent people on death row and capital punishment’s ties to a history of racism, calling for a progressive shift in policy.

Virginia is now on its way to becoming the 23rd state to abolish the death penalty and, significantly, the first formerly Confederate state to achieve abolition. In addition, Virginia has executed more people in its history than any other state in the nation, with over 1,300 executions recorded since the commonwealth’s first in 1608.

Virginia is now on its way to becoming the 23rd state to abolish the death penalty and, significantly, the first formerly Confederate state to achieve abolition.

Hannah Cox, the senior national manager of Conservatives Concerned About the Death Penalty, directly called out the Senate’s Republican minority, which opposed the ban. While Senate Republicans argued that the death penalty was necessary for those who had committed particularly heinous crimes and that the penalty is applied judiciously in the commonwealth (thanks to DNA evidence and the rarity of application over the last few decades), Ms. Cox’s statement suggested a growing consensus among G.O.P. legislators about the ineffectiveness and cruelty of capital punishment. “Republican Virginia lawmakers who did not vote to end the death penalty are out of step with the large number of G.O.P. legislators around the country who have been voting for and even sponsoring repeal bills in recent years,” she said. “Virginia’s death penalty is a relic of the past, a failed public policy that wastes resources, kills innocent people, and fails to make the public safer.”

The Virginia Catholic Conference represents the bishops in Virginia’s two dioceses by advocating for public policy that is consistent with the beliefs and values of Catholic tradition. In their response to the passage of abolition legislation, Bishop Michael F. Burbidge of the Diocese of Arlington and Bishop Barry C. Knestout of the Diocese of Richmond echoed words on the death penalty from Pope Francis and the Catechism of the Catholic Church. The bishops’ statement said that they “welcome” the votes of the House and Senate and are grateful for growing awareness of the truth in the Catechism that capital punishment “is inadmissible because it is an attack on the inviolability and dignity of the person” (No. 2267).

The Catholic Mobilizing Network worked with Catholic Virginians to help make their voices heard by legislators. They shared a letter that constituents could sign and send to their representatives that would ask them to support what they called “this life-affirming legislation.”

In the letter, the Catholic Mobilizing Network explained the convictions that lead Catholics to oppose the death penalty: “As a Catholic Virginian, my faith compels me to stand up for the God-given dignity of every person, regardless of the harm they might have caused or suffered. The death penalty violates this call to uphold the sanctity of life, and takes away one’s opportunity for redemption.”

“It goes without saying that our faith does not conform to any one political party, which makes us critical bridge-builders in the work of abolition,” said Krisanne Vaillancourt Murphy.

Krisanne Vaillancourt Murphy, the executive director of Catholic Mobilizing Network, spoke about the importance of the Catholic voice in the debate around capital punishment. “It goes without saying that our faith does not conform to any one political party, which makes us critical bridge-builders in the work of abolition,” she said. “It is the role of Catholics to proclaim a consistently pro-life ethic—one that applies as much to the guilty as it does to the innocent. This message is crucial in the anti-death penalty movement.”

Executions have steadily decreased in Virginia since the 1990s; currently, the commonwealth has two inmates on death row. If the governor signs the bill into law as he is expected to do, both inmates’ sentences will retroactively be changed from execution to life imprisonment.

As six other states have introduced proposals to ban the death penalty this year, Virginia’s new legislation may set the stage for similar abolition legislation in other parts of the country.

Ms. Vaillancourt Murphy called Friday’s news “an indicator of and impetus for the nation’s growing momentum toward abolition.” She articulated the ways in which this legislation could encourage change elsewhere: “We are hopeful that Virginia’s repeal will signal to other southern states that the death penalty is a racist and inherently flawed relic. It is not consistent with pro-life values; it does not bring justice nor healing.”