The assault on the Capitol was horrific. But occupying a legislature can be a legitimate act of protest. 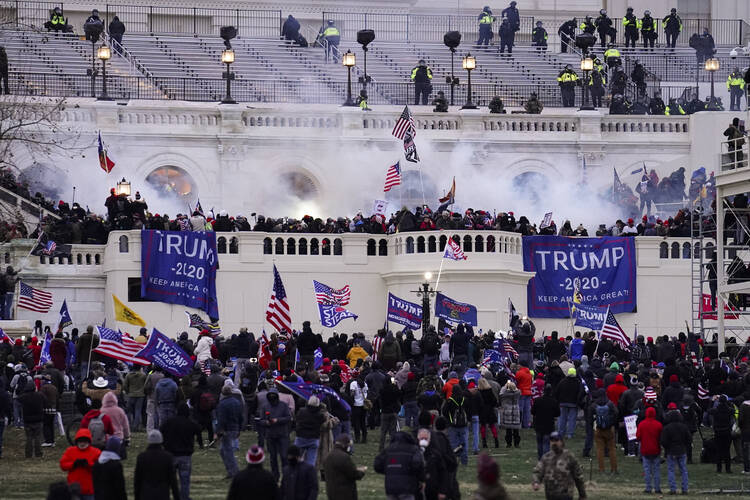 The Chinese politburo is reveling in Washington’s chaos of Jan. 6. A spokeswoman for China’s Ministry of Foreign Affairs recalled that House Speaker Nancy Pelosi described Hong Kong’s anti-Beijing protests in 2019, which occupied the city’s legislature, as “a beautiful sight to behold.” The occupation of her own legislature, in contrast, was a “shameful assault on our democracy.”

It was that. The takeover was spurred by a president hawking doomed, discredited conspiracy theories about his election defeat. The misinformed occupiers carried firearms and Confederate battle flags, and they planted bombs. At least five people have died, including a woman shot by the Capitol Police and an officer who succumbed to injuries sustained during the riot. They replaced an American flag with one bearing President Trump’s name. Whereas the Hong Kong protests sought to expand their democratic rights against Beijing’s incursions, the MAGA crowd represented a cult of personality. As Mr. Trump’s followers prepared for their incursion, 53 Hong Kong activists were arrested in a landmark sweep.

Speaker Pelosi’s condemnation was one of many denunciations that seemed to regard the occupation of Congress as, in principle, an anti-democratic act. This particular occupation was. But it is also worth remembering that occupying a legislature can be an act of democracy. We in the United States might need to do it again.

It is worth remembering that occupying a legislature can be an act of democracy. We in the United States might need to do it again.

One of the shining examples of good governance against Covid-19, for instance, has been Taiwan, which leveraged its high degree of public trust in government to nearly eradicate the virus—despite its exposure to the initial outbreak in China. Taiwan was ruled by a military dictatorship as recently as 1987, and its government is always under intense pressure to accept influence from Beijing. In 2014, when a secret trade deal with China was poised to pass, a student uprising called the Sunflower Movement filled the streets and occupied the island’s legislature. The protest halted the deal, and the ruling party suffered in subsequent elections. One of the organizers, Audrey Tang, was appointed the government’s “digital minister” and has since led innovative responses to the pandemic.

That same year, Dutch Kurds occupied the parliament building in the Hague, calling for their government to take stronger action against ISIS. And there are many more cases. In 1998, it was a student occupation of the parliament, welcomed by the legislators themselves, that ended the Suharto dictatorship in Indonesia—a tale recently retold in the children’s book M Is for Movement. In 2016 in Poland, it was a group of Parliament members themselves who occupied their legislature, in protest of the right-wing ruling party’s bid to ban media access to the legislative process.

The case that came immediately to mind for me on Jan. 6, however, was the occupation of Wisconsin’s Capitol in early 2011. As on Jan. 6, protesters sought to obstruct the functioning of government—in that case, to halt the passage of Gov. Scott Walker’s bill that would gut the state’s public-sector unions. The protests went on for about two weeks, right on the heels of the Tahrir Square uprising in Egypt; Egyptian activists phoned in pizza orders for their counterparts in Madison. Like nearly any protest, it bore a mix of glory and absurdity, of silly costumes and semi-miraculous self-organizing. Unlike Jan. 6, there were not the guns, the bombs or the racist battle flags; a comparison is not an equivalence. The occupation in Madison failed to stop the targeted bill’s passage, but in the longer run it revived the state’s storied labor movement.

The U.S. Capitol has been a target before, too. There was the Bonus Army of 1932, when World War I veterans camped around the building, demanding money they felt they were owed in the depths of the Great Depression. And there were the repeated sieges of the Vietnam era, such as the 1971 May Day extravaganza in Washington—prompting the largest mass arrest in U.S. history, in defense of the government’s ongoing massacre abroad.

Only God is holy; governments, especially democratic ones, have to earn their people’s respect.

When I look at the Capitol, a building whose shadow I grew up in, I have trouble seeing a place of unassailable sacredness. I came of political age in the protests of the early 2000s, during the run-up to the Afghanistan and Iraq wars—disasters approved in that building and that remain with us two decades later. Only God is holy; governments, especially democratic ones, have to earn their people’s respect.

This is why I was troubled to see the denunciations of protesters filling the Capitol, as such. The cause was abhorrent, as was the terrorism. The way it felt like an assault for the people inside was cruel, generating long-overdue backlash against the president and his supporters. But perhaps we are also overdue for a better kind of occupation there.

Congress’s approval rating is now barely in double digits. The Capitol has become a place of rancor and grandstanding, delivering little of what majorities of Americans actually demand, like affordable health care, sensible climate policy, infrastructure investments and election reforms. The legislature’s inability to deliver sufficient pandemic relief is only the most recent example. Perhaps the new Democratic regime will bring a change of tone and a surge of hope, but the words of unity we heard from representatives the night after the incursion are already blowing away.

Jan. 6 was an embarrassment not because ordinary Americans disrupted a house of government but because of how and why they did it. Before long, we might need to do the same thing the right way. In the meantime, we can practice by occupying the legislatures of everyday life, by building democratic organizations, workplaces and online communities. We can run for office and help each other win. If the Capitol must be occupied again, we should be ready to demonstrate what democracy really looks like.