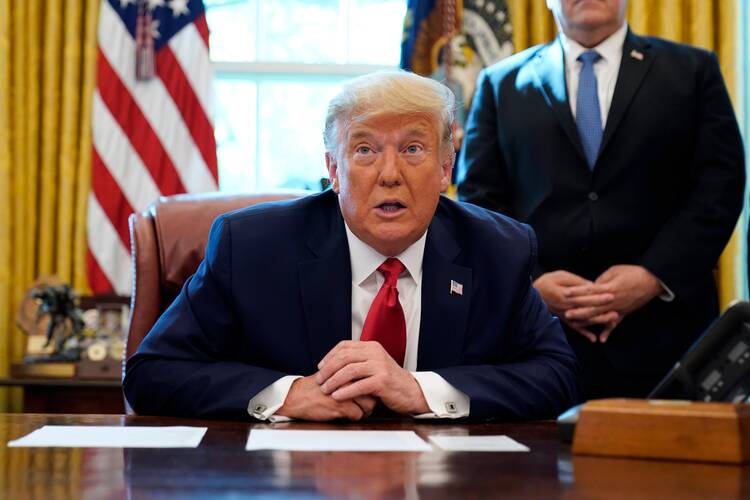 WASHINGTON (RNS) — In an exclusive interview with Religion News Service, President Trump said in a written statement that he no longer identifies as a Presbyterian and now sees himself as a non-denominational Christian.

"Though I was confirmed at a Presbyterian church as a child, I now consider myself to be a non-denominational Christian," Trump, who has repeatedly identified as a Presbyterian in the past, said in a written response to RNS.

Saying that his parents "taught me the importance of faith and prayer from a young age," Trump went on to say that "Melania and I have gotten to visit some amazing churches and meet with great faith leaders from around the world. During the unprecedented COVID-19 outbreak, I tuned into several virtual church services and know that millions of Americans did the same."

The revelation about Trump's religious identity appeared in an interview that was conducted in writing and covered a variety of faith topics, ranging from the president's own spiritual life to his plans for the White House office tasked with engaging faith groups.

Questions for the interview, which were first negotiated with the White House press office, were presented to the president by Paula White, a Florida pastor and the head of the White House Faith and Opportunity Initiative, according to the White House.

White House staffers said that the answers are attributable to the president.

Despite the unusual context, the result is a rare exchange about religion-related matters with a president who, while allying closely with evangelical Christian leaders, has said relatively little about his own faith.

Asked whether he learned anything spiritually from his experience of contracting COVID-19, Trump responded that he and Melania "felt the prayers of Americans from all across the country — and even around the world" when he was recovering at Walter Reed National Military Medical Center.

"I said, 'There were miracles coming down from heaven.' I meant it — Melania and I are very thankful to God for looking out for our family and re-turning us to good health," he wrote.

Though the president didn't directly answer a question about particular spiritual lessons he had learned from his influential evangelical supporters, Trump praised their faith and said Franklin Graham, president and CEO of his father Billy's evangelistic organization and of the relief organization Samaritan's Purse, had visited the Oval Office to pray for him earlier this month.

"These amazing people love the U.S.A. and have a genuine desire to work together for the betterment of all Americans," Trump said. "I appreciate their prayers and am encouraged by their great faith."

After saying that he considers himself a non-denominational Christian, which came in response to the question, "Do you consider yourself an evangelical Christian?" the president turned the discussion from his personal faith to his admiration for his evangelical advisers' willingness to reopen their churches in the face of the pandemic. They "are passionate about America's traditional values and want our churches to be open," he said.

"Thankfully, many great churches are now back open and meeting in person," he wrote, seemingly ignoring that multiple COVID-19 outbreaks have occurred at houses of worship, including a recent "superspreader" event that took place this month at a church in Maine.

The remainder of the interview revolved around policy questions that impact religion.

The White House declined to respond to questions that dealt with Trump's former pastor Norman Vincent Peale, criticism from faith groups regarding his treatment of immigrants and whether the president has any response to detractors who decry his travel ban as discriminatory against Muslims and argue that he has privileged evangelicals over other faith groups.

The White House also declined to answer a question asking how the president would respond to those who say that his administration's drastic reduction in refugees admitted to the U.S. — including Christians from nations where they encounter persecution — has broken a 2017 promise to "help" persecuted Christians in places such as Syria. Instead, the press office said they preferred to address what the administration has done for persecuted Christians around the world.

On this subject, Trump pointed first to his administration's successful negotiation two years ago to return American pastor Andrew Brunson to the U.S. after he was imprisoned in Turkey.

The president then gave a wide-ranging account of what he said was his administration's commitment to religious freedom, including sanctioning Cuba and Venezuela "because they don't respect religious freedom," and touting the State Department's Ministerial to Advance Religious Freedom, held in 2018 and 2019, as "the largest human rights event in history."

Trump also recalled the event on religious freedom he hosted during last September's United Nations General Assembly in New York. "In my speech, I reminded the world's leaders that our rights do not come from government, they come from God — and I explicitly called upon the nations of the world to end religious persecution," he wrote.

"I followed that event with an Executive Order on Advancing International Religious Freedom," he continued, "that solidified America's own commitment to this critical issue, by naming it as a foreign policy priority of the United States and promising that we will respect and vigorously promote this freedom."

In 2018, Vice President Mike Pence halted funds for what he said were "ineffective" U.N. programs and announced the money would go to aid religious minorities in northern Iraq via the U.S. Agency for International Development and partnerships with faith-based groups, such as the Knights of Columbus.

However, Trump did not acknowledge ongoing issues with those efforts: While some Christians have moved back to those locations, others have said that they are unlikely to do so due to lingering security concerns.

Trump promised that he would continue to make religious freedom a priority should he win a second term. "As I said at the United Nations, America stands with believers in every country who ask only for the freedom to live according to the faith that is within their own hearts," he said. "And we will continue to do so for as long as I am President."

The president shed light on the work of the White House Faith and Opportunity Initiative, a body created by his administration via a May 2018 executive order, which effectively replaced the White House Office of Faith-Based and Neighborhood Partnerships that was created under President George W. Bush and expanded under President Barack Obama with a slightly different name.

Trump claimed to have expanded faith outreach in the interview. "Under my Administration," the president noted, "we have established an office or liaison in every Cabinet agency for the first time."

But the exact mission and work of his White House faith office has largely remained a mystery. While he created the agency more than two years ago, the president did not staff it until November 2019, when he tapped White to head the initiative.

However, Trump did detail one of its core projects: "Led by Pastor Paula White, this initiative is working to remove barriers which have unfairly prevented faith-based organizations from working with or receiving funding from the federal government."

But given how often the White House regularly welcomes evangelical Christian leaders inside its walls, and indeed its deliberations on everything from Israel to prison reform, the exact role of the faith office remains unclear.