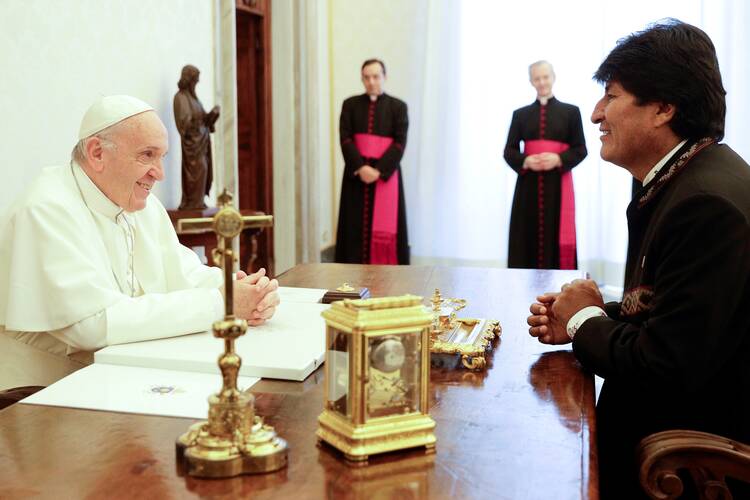 Evo Morales said Pope Francis called him to congratulate him on his party’s win after exit polls showed that the former Bolivian president’s top pick, Luis Arce, would win the general election. He claimed that Pope Francis also asked that he exact “no revenge.”

The Vatican has not confirmed that such a call took place, though the Vatican rarely comments on the pope’s personal conversations.

Mr. Morales, the leader of the South American country’s leftist party, Movimiento al Socialismo (MAS), who until last year had served as the country’s first indigenous president, revealed the pope’s call on Oct. 19 at a press conference in Buenos Aires, Argentina, where he is exiled. He said that the pope’s call had surprised him and he was grateful for the gesture.

Evo Morales claimed that Pope Francis also asked that he exact “no revenge.”

Following Mr. Morales’s ousting, Jeanine Añez, the leader of the conservative party, the Democrat Social Movement, was appointed interim president. But after months of mounting tensions and continued violent protests that have led to the death of at least 36 people since last year’s civilian uprising, Ms. Añez recognized Mr. Arce’s victory and asked him “to govern Bolivia with democracy in mind.” Carlos Mesa, the main opposition candidate who had already served as Bolivia’s president from 2003 to 2005, also conceded that Mr. Arce had taken the election in a landslide after the exit polls showed that Mr. Arce had claimed 52.4 percent of the vote, far ahead of Mr. Mesa’s 31.5 percent.

Was there a coup in Bolivia? After Evo Morales, what’s next?
Kevin Clarke

“Undoubtedly, today is a historic day. Once again, the Bolivian people have delivered a lesson in democracy and perseverance,” Mr. Morales said at a press conference this past Sunday before indicting Ms. Añez for the abysmal leadership of her short-lived government.

“The people have resisted a coup, a de facto government, two massacres, a pandemic management marked by inefficiency and corruption, several delays on the elections and the worst economic crisis in our history.”

Despite the opposition party’s concession of the election, Mr. Morales continued to plead for peace as the votes were being tallied to determine the official result.

Appearing to have taken heed of Pope Francis’ call, Mr. Morales said, “We are not vengeful.”

During his press conference, Mr. Morales also announced his return to Bolivia and said that he would not seek to return to the government.

“I knew he would win with more than 50 percent in these elections,” Mr. Morales said, applauding Mr. Arce’s success. “I’m inviting all parties, business owners, workers, laborers; we must have a great coming together, a pact of reconciliation to reconstruct our beloved Bolivia,” he said.

Appearing to have taken heed of Pope Francis’ call, Mr. Morales said, “We are not vengeful.”

Mr. Morales met Pope Francis in a 2015 audience, where the then-president raised eyebrows in the Vatican with his gift of a crucifix in the shape of a hammer and sickle. After Mr. Morales fled the country following the 2019 election, he suggested in an interview with the Associated Press that the Catholic Church and, if needed, the pope should step in to mediate peace.

Colleen Dulle contributed to this report.