Reforms don’t work. The police must be defunded. 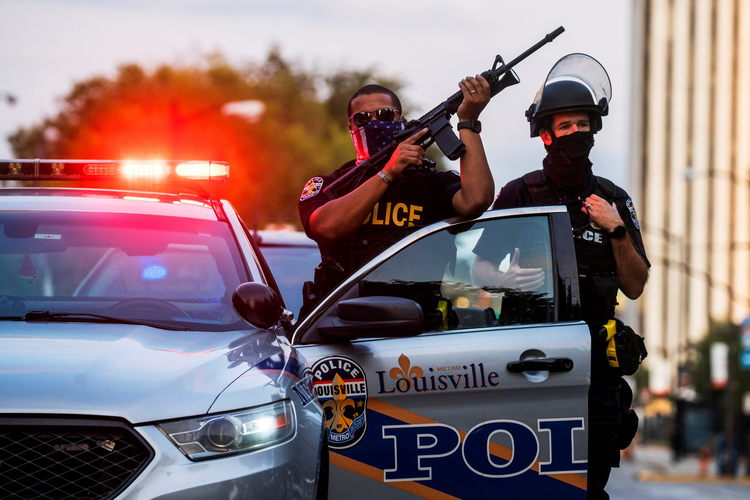 Louisville police officers stand guard on Sept. 26, as demonstrators march during a peaceful protest after a grand jury handed down an indictment on Sept. 23 for one of three police officers involved in the fatal shooting of Breonna Taylor. (CNS photo/Eduardo Munoz, Reuters)

For a different perspective on this topic, see “Don’t abolish the police. Reimagine law enforcement.,” by Tobias Winright.

After the police officer Derek Chauvin killed George Floyd in Minneapolis on May 25, the public response was swift and global. And the subsequent calls to defund the police have exposed a contradiction in liberal thought about the morality of policing. Many Catholics, among others, have come to recognize the U.S. criminal justice system as perpetuating the injustices of the Jim Crow era. Yet there is a discomfort with calls to shrink its resources and reduce officer contact with Black communities. Doing so would begin to rewrite America’s social contract with Black people, presenting for the first time since Reconstruction an alternative to a system backed up by state violence.

Instead, lawmakers have yet again offered tweaks to the way police are trained and procedural changes to how they do their jobs as solutions to police violence. We have been here before, going from President Truman’s efforts to professionalize police forces so they would stop ignoring or even participating in race riots to President Obama’s Task Force on 21st Century Policing, which hailed Minneapolis as a success story.

The evidence does not support popular liberal reforms: Anti-bias training has no discernible impact on deterring police violence. A survey conducted by George Mason University researchers in 2016 found that 93 percent of state prosecutors had reported using body camera footage in cases against civilians, but only 8 percent had used such footage to prosecute police. Other studies have suggested that police officers of color are often harsher toward their own communities. “Community policing,” a model to which candidate Joe Biden promises $300 million, boosts petty arrests of poor people.

People of faith must examine the moral legitimacy of policing itself. There has never been a time when it has not crushed the weak and promoted the interests of the powerful.

People of faith must examine the moral legitimacy of policing itself. There has never been a time when it has not crushed the weak and promoted the interests of the powerful. In 1829, when Sir Robert Peel founded the first modern police force, the London Metropolitan Police, he may have made superficial changes but still modeled it after the Irish Peace Preservation Force, which he created to put down insurrections by Irish peasant-farmers starving under English colonial rule.

An essay by Charles Dickens from 1851, “On Duty with Inspector Field,” sheds light on what preoccupied early “Bobbies” and subsequent urban police forces. The author recounts a series of police night raids in a London slum he describes as a “compound of sickening smells, these heaps of filth, these tumbling houses.” The poor answer Inspector Field’s questions and dutifully laugh at his overly familiar jokes: “Inspector Field’s hand is the well-known hand that has collared half the people here.... Every thief here cowers before him, like a schoolboy before his schoolmaster.” The message to Dickens’s upper-class readers is clear: The police keep London’s filth out of sight and under control through physical intimidation and threat of arrest.

A tool against collective action

American policing, in particular, has its origins in a system that the church now regards as evil. In the U.S. South, “slave patrols,” aimed at quashing resistance to slavery, were among the first organized law enforcement bodies. In the North, policing expanded as a way to use violence to discipline disgruntled workers and the poor, and to prevent them from effectively organizing. Finally, police forces in the U.S. territories, including the present-day Western states, were used to advance colonial expansion and suppress Indigenous populations. The church’s moral vocabulary collapses under the weight of this history. There can be no reconciliation where there has only been violence. There was no Eden here.

The interests of colonizers, slave masters and property owners set the trajectory of police work. Today’s outcomes still reflect those interests. Excessive force and sexual misconduct are among the most common complaints against police officers. Wealth, race and ethnicity are the greatest predictors of outcomes in the criminal legal system. Descendants of enslaved and colonized people are imprisoned or killed by the police at the highest per-capita rates in the country.

Policing legitimizes itself, in part, through the creation of a domestic or foreign “other” that threatens the white middle-class body, neighborhood and country.

Policing, like other forms of state violence, legitimizes itself, in part, through the creation of a domestic or foreign “other” that threatens the white middle-class body, neighborhood and country. “They” are always coming to get you and your property; to overwhelm your suburbs with violence and crime, as President Trump has repeatedly warned in this election year. These invaders are almost always racialized through terms like thugs, super-predators, illegals, welfare queens, terrorists and antifa.

People do not make community with a menacing outsider. They do not see themselves as unified in one body with it. This other can only be dominated, beaten back or cordoned off. That is law and order.

The abolition movement asks us to consider whether we need the police to deal with disorder. It seeks to make policing, prisons and surveillance obsolete by solving social problems head-on. It is an invitation to recreate Jesus’ subversive communion table that upended the social, religious and legal values of his day. It calls on us to rethink punishment as justice and to extend hospitality rather than harm to those who deviate from social norms.

Countless behaviors that poor people engage in for survival are illegal. To address visible homelessness, for instance, we do not invest in affordable housing or build public restrooms that would benefit us all. Rather, we use the police to harass and arrest the homeless to “solve” that problem. They enforce municipal bans on necessary human activities like sleeping in cars or on the street, effectively making homeless people’s lives illegal.

Abolitionists recognize the contingency of our social arrangements. We did not always respond to social problems or even real interpersonal harm by putting people into cages. We did not always have a police force three and a half times the size of the British military patrolling our streets. This is one form of governance among many. We can change this arrangement if we choose. Abolitionists challenge us to join our neighbors and co-create the community we desire.

We did not always respond to social problems or even real interpersonal harm by putting people into cages.

Those who have only recently encountered abolition or calls to radically redistribute police funds may be fearful. It is understandable: The expansion of our police state did not just happen. An ideological infrastructure had to be erected and maintained to justify the institution. Americans have been propagandized at an astonishing rate to believe that our current situation is reasonable. For instance, by one count, U.S. television networks have broadcast over 300 police procedurals since 1950. During that time, we have become the world leader in incarceration and among the most policed and surveilled nations in the world.

In short, abolition does not mean giving up state-provided safety; it means giving up the delusion that the state provides safety to all its citizens through violence, surveillance and imprisonment. It will not be instantaneous. What can begin now, though, is shrinking the resources and scope of the institutions incompatible with that vision. We can instead fund things that promote human flourishing like universal housing and humane mental health treatment, thereby making crime less likely.

Resistance to calls to defund the police belie the claims of the last 40 years of bipartisan austerity and privatization. They told us the money for large government social programs simply did not exist. The public just found the money. All along it was in the Pentagon, intelligence agencies, at the border, in our police departments and buried beneath the 936 prisons built from 1980 to 2004.

What will it take for police reform to work? The church’s abuse scandal offers some lessons.
Kathleen McChesney

At last count, there are only 924,107 staffed hospital beds, compared with over 2.3 million occupied prison beds. One need not be an abolitionist to suspect that only a moribund society would produce such disordered spending. These priorities have always been unsustainable. The Covid-19 pandemic has exposed for many that they are deadly, too.

The value of Black history and collective experiences is at stake in the still-controversial phrase “Black lives matter.” Black people have been here for every attempted reform of the policing system, and at every turn have again suffered unjust violence thereafter. Reformists would not only have us ignore this record, but they demand we bet our lives on it, too. 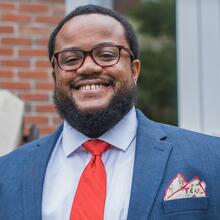 Dwayne David Paul is a Catholic educator and writer, and the director of the Collaborative Center for Justice.

@DwayneDavidPaul
Show Comments ()
Join the conversation: Login or create an account
Before you can comment, you need to update your profile to include your first and last name, as required in our comments policy. Then reload this page and you'll be set up for commenting. Update your profile