Voting Catholic: How have Catholics voted in past elections? 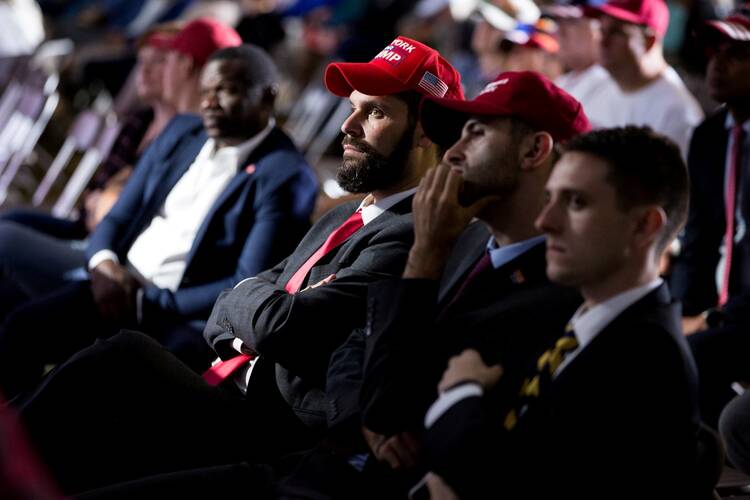 Catholics are predicted to play a crucial role in whether or not President Donald Trump will receive a second term. The candidates are running close as November approaches and the overall Catholic vote appears up for grabs, despite the fact that former vice president Joseph Biden, Mr. Trump’s Democratic opponent, is a practicing Catholic who has referenced his faith many times on the campaign trail. The uncertainty of how Catholics will vote reflects an continuing pattern of switching support between Democratic and Republican candidates in recent U.S. presidential elections.

“The Catholic pattern of voting in the 2016 election was very interesting and very similar to what we’ve seen in other recent elections,” Greg Smith, the associate director of religion research at the Pew Research Center, told Sebastian Gomes, an executive editor at America and the host of its new podcast Voting Catholic. “If we look back over a longer period of time, what we can say is that in recent presidential elections, Catholic voters have swung back and forth between the Republican and Democratic candidates. They've tended to be evenly divided.”

According to the Pew Research Center, in the 2016 election 52 percent of Catholics supported Mr. Trump, while 44 percent backed Hillary Clinton. They narrowly chose another Republican, George Bush, in 2004 over John Kerry. Catholic voters supported Barack Obama over John McCain in 2008 by a substantial nine point margin, 54 to 45 percent. Mr. Smith added that in the 2000 and 2012 presidential elections, the Catholic vote was “split pretty much right down to the middle.”

“White Catholics are a pretty strongly Republican group, and they’ve been trending that way for quite some time.”

Mr. Smith noted that U.S. Catholic voting tracks the overall voting pattern of the U.S. population as a whole in some important ways. But digging deeper, he found significant differences in voter preferences among American Catholics.

Almost six in 10 white Catholics identify with or lean toward the Republican party, and almost two-thirds of them voted for Mr. Trump over Ms. Clinton in 2016. About the same number of Catholics say they will vote for Mr. Trump in the upcoming election. This group also expresses more approval than disapproval of Mr. Trump’s job performance.

“White Catholics are a pretty strongly Republican group, and they’ve been trending that way for quite some time,” Mr. Smith said.

Hispanic Catholics, meanwhile, are a different story. They constitute a large and growing segment of the Catholic electorate, and about two-thirds of them say they identify with or lean toward the Democratic Party. About 65 percent say they will vote for Joe Biden in the upcoming election.

“While they share a faith in common, [Hispanic Catholics and white Catholics] are at totally different ends of the political spectrum,” Mr. Smith said.

When it comes to policy issues, it is also clear that Catholic voters’ loyalties lie squarely with the political party they are affiliated with and not necessarily with church teaching. Seventy-seven percent of Democratic-leaning Catholics say abortion should be legal in most or all cases, while 63 percent of Republican-leaning Catholics say that abortion should be illegal in most or all cases. Ninety-one percent of Catholic Democrats oppose the border wall while 81 percent of Catholic Republicans support expanding it.

“Catholics are a large and important political constituency and so I do think on some level, it makes sense to think of a single Catholic vote,” Mr. Smith said. “However, we also know that Catholics as a whole are evenly divided politically” between Democrats and Republicans. “And in some ways thinking of them as a single voting bloc can actually obscure more than it reveals.”

Mr. Smith talks more about the factors behind the political polarization of Catholics, including discussion on other ethnicities, geographic location and their similarities with evangelical voters, on the first episode of Voting Catholic, a new podcast by America Media that helps Catholics discern how to vote in the 2020 presidential election.