New caravan of 3,000 migrants forms in Honduras; first during pandemic 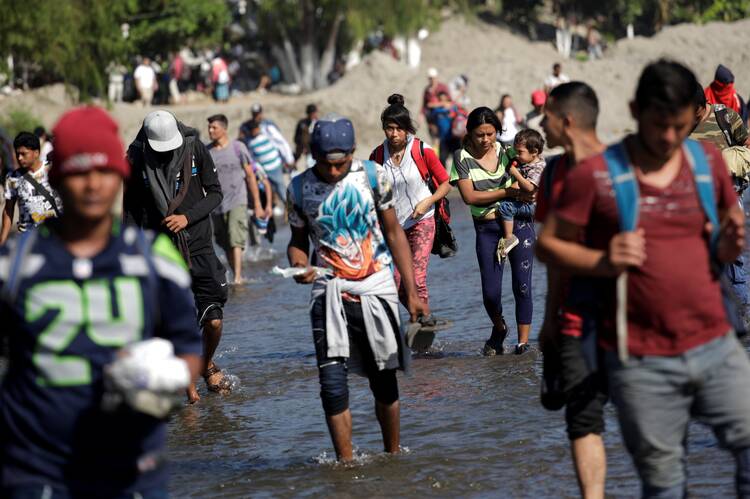 A caravan of migrants from Central America trying to reach the United States is seen in late January crossing a river near Ciudad Hidalgo, Mexico. Catholic migrant ministries in Guatemala are attending to a caravan of about 3,000 migrants who entered Guatemala Oct. 1 after setting out the night before from San Pedro Sula, Honduras. (CNS photo/Andres Martinez Casares, Reuters)

MEXICO CITY (CNS) -- Catholic migrant ministries in Guatemala are attending to a caravan that formed in Honduras and is heading northward toward the border with Mexico.

The caravan of approximately 3,000 migrants entered Guatemala Oct. 1 after setting out the night before from San Pedro Sula in northern Honduras.

It was the first mass caravan to form during the pandemic and reflected the desperation of life in Central America, where cratering economies have deepened poverty and motivated many to migrate.

"They're leaving in groups and what they're looking for are life alternatives outside Honduras because Honduras has nothing to offer," Scalabrinian Sister Nyzelle Juliana Donde, director of the Honduran bishops' migrant ministry, told Catholic News Service.

"What most migrants do is leave for basic needs. The pandemic exacerbated hunger, poverty, lack of opportunity. 'Maras' and gangs have also worked very hard during this time," she said.

"What these people want most is an opportunity to work and support their families because the truth is that Honduras is very bleak in terms of poverty," she added.

Caravans formed regularly in Honduras prior to the pandemic, though Mexico had started deploying its national guard to impede large groups of migrants from transiting the country.

Indigenous men in Honduras are being abducted. Are the police to blame?
Jackie McVicar

I was an American missionary in Honduras. I witnessed firsthand the violence they endure.
Patrick Gothman

The caravans have also become political issues, especially as a large caravan transited Mexico in late 2018 and drew the displeasure of President Donald Trump.

Sister Nyzelle said most migrants weren't paying attention to the president's rhetoric or the U.S. elections and still clung to "the American dream."

"It's a matter of survival," she said. "So what people want and what they're anxious for is a better life and only look toward the United States."

Talk of a mass exit of migrants started two weeks in advance of the most recent caravan forming, Sister Nyzelle said. Rumors are circulating of two more caravans forming, she said.

Videos on social media showed migrants -- including many wearing masks -- pushing past Guatemalan border officials and into the country.

The Guatemalan bishops' migrant ministry said in an Oct. 1 statement that it had sent a team to provide humanitarian assistance. The Scalabrinian migrant shelter in Guatemala City provided hygiene kits and food, but could not open its doors to the travelers for health reasons, according to Carlos López, a shelter director.