Is Amy Coney Barrett’s ‘kingdom of God’ different from Obama’s?

Is Amy Coney Barrett’s ‘kingdom of God’ different from Obama’s? 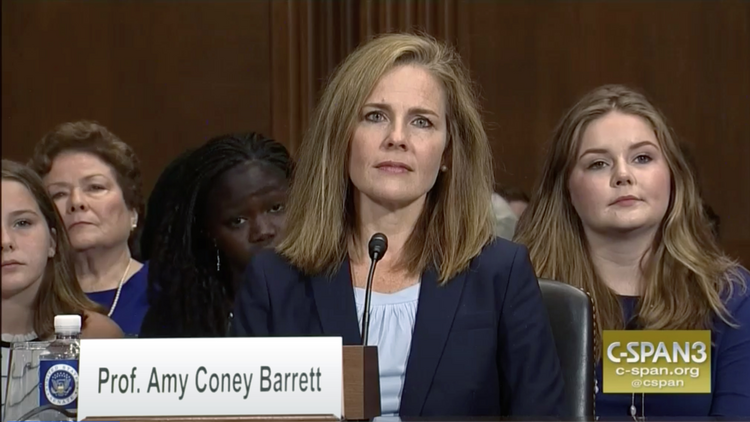 Judge Amy Coney Barrett appears at her nomination hearing to sit on the 7th Circuit Court of Appeals in Sept. 2017. Video screengrab

(RNS) — The Washington Post’s headline on an assessment of Ruth Bader Ginsburg this weekend read: “Ruth Bader Ginsburg was passionate about Judaism’s concern for justice.” The article (by my Religion News Service colleague Yonat Shimron) noted that Justice Ginsburg hung Bible verses in her chambers signaling from where she took inspiration for her life’s work.

She took this religious stance toward her job on the nation’s highest court and was able not only to avoid criticism, but garner adulation. As Shimron described it, “Ginsburg developed a cultlike following over her more than 27 years on the bench, especially among young women who appreciated her lifelong, fierce defense of women’s rights.”

At least since the Rev. Martin Luther King Jr. forced the U.S. government’s hand to pass federal civil rights legislation in the 1960s, Americans, but especially those on the liberal side of the spectrum, have accepted that faith has a powerful influence on the political conscience of the country. King did this by appealing to his fellow Christians.  His famous Letter from a Birmingham Jail invoked the authority of Christian Scripture and tradition to call out fellow Christians — especially fellow clergy — for their complicity with racism. King is now the only person honored with a federal holiday who has “Reverend” in his title.

For President Barack Obama, the question of his religion was occasionally a sore point — as a candidate he had to disavow the inflammatory rhetoric of a pastor of a church he attended in Chicago — or the source of uninformed conjecture — he was often suspected of being an undeclared Muslim. But Obama’s Christian faith was central to his identity and goals as politician and statesman. One of the signal moments of his presidency was his halting baritone leading the crowd in “Amazing Grace” at the eulogy for the victims of a racist massacre at the Mother Emanuel AME church in Charleston, South Carolina.

Significantly, very few object to these religious approaches. Almost no one suggests today that Ginsburg, King and Obama were acting as theocrats trying to impose their religion on those who think differently. Almost no one says that it is “of concern” that these towering public figures were fundamentally guided by their faith in their attempts to change U.S. political realities.

When Notre Dame law professor Amy Coney Barrett appeared at her nomination hearing to sit on the 7 Circuit Court of Appeals in 2017, however, faith and public policy were suddenly at odds. Sen. Dianne Feinstein spoke for many when she told Barrett quite directly, “The dogma lives loudly within you, and that’s of concern.”

Feinstein was not wrong: The dogma clearly lives loudly within Judge Barrett. Barrett is a pro-life Catholic whose respect for human dignity is consistent across the board, from fertilization (she is anti-abortion) until natural death (she is anti-death penalty).

The problem Feinstein and others have with how Barrett’s Catholic faith influences her approach to the law appears to be the conclusions Barrett’s faith leads her to. In short, the critique is not about religion at all, but about disagreement over political views.

More recently, a tweet quotes Barrett saying she considers building the kingdom of God the goal of a legal career. While the mention of kingdoms and the deity may scare some secular minds, the phrase “the kingdom of God,” to most Christians, represents a restored world where justice and care for the other prevails — not so different from the Jewish concept of tikkun olam. The idea that Christians on the right, left and everywhere else should not pursue the kingdom of God in their lives is a misunderstanding of the religious concept and faith in general.

I grew up in a charismatic group like Amy Coney Barrett’s. Here’s why they are a good thing.
Nathan W. O'Halloran, S.J.

In 2007, Obama told an evangelical congregation in South Carolina: “We’re going to keep on praising together. I am confident that we can create a kingdom right here on earth.” Though disagreeing on some important particulars, Barrett is similarly interested in praising God and working to help build the kingdom.

Neither is a dangerous theocrat.

“Now hold up,” a critic might say at this point. “Everyone is permitted to judge based on their particular vision of the good, but only within reason. Judge Coney Barrett belongs to the ‘People of Praise’ Christian cult.” Is there more proof that she wants to rule as a theocrat and therefore has no place on the Supreme Court of the United States?

For people outside of church circles, small charismatic Christian groups like People of Praise may seem “of concern,” even cultish. But within large religious institutions like the Catholic Church, such groups are quite common and are particularly attractive at a time of loneliness and disconnection. That’s perhaps why praise groups are one of the important ways people of color and immigrants have changed and are changing American churches. Pope Francis is a big supporter of these groups and has encouraged them in their local efforts to work for justice.

Being local and community oriented, People of Praise chapters vary in their character and practices. Some people have had bad experiences with groups like People of Praise, and some former members of People of Praise communities have alleged spiritual and emotional abuse. Others have had positive things to say. Alarms have been raised about People of Praise beliefs about gender roles, but these criticisms are hard to credit when what has brought them to our attention is that one of their female members is at the brink of the ultimate attainment in her profession.

Anecdotally, I should add, as someone with parents and many friends who live in South Bend, Indiana (the home of Barrett’s group), I’ve yet to hear someone say a bad thing about the local People of Praise, and many gush with compliments for its members and the quality of their local school.

There’s a final irony to concerns about how Barrett’s faith will affect her decision-making on the bench. Her judicial philosophy (unlike Ginsburg’s) is one of ideological restraint, in which the judge’s personal vision of the good (including the judge’s religious vision) is put to the side as much as possible.

Indeed, the now famous 1998 law review article Barrett co-authored considers how Catholic judges’ faith might act on their decision-making, particularly when it came to those who opposed the death penalty. She argued that those judges should recuse themselves when their faith might color their rulings. Far from pushing their faith agendas, she and her co-author wrote, “we need to know whether judges are legally disqualified from hearing cases that their consciences would let them decide.”

Show Comments ()
Join the conversation: Login or create an account
Before you can comment, you need to update your profile to include your first and last name, as required in our comments policy. Then reload this page and you'll be set up for commenting. Update your profile
More: US Politics / Supreme Court