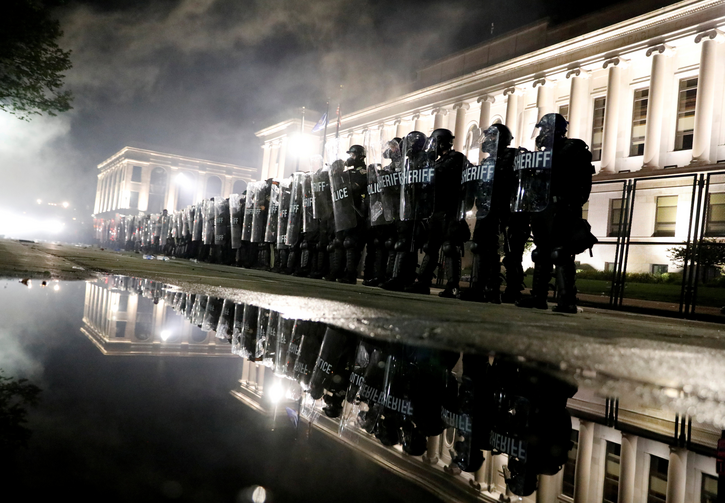 On Sunday, Aug. 23, Jacob Blake, a Black man, was shot seven times in the back by a white police officer in Kenosha, Wis. According to witnesses, he had been attempting to break up an argument between two women when the police arrived. After a brief altercation, Mr. Blake moved away from the police and tried to enter his car, at which point one of the police officers opened fire. As of Friday, Mr. Blake remains in the hospital, partially paralyzed by his injuries, and has reportedly been handcuffed to his bed.

“The sad story is that, for many people, particularly African Americans, this incident in Kenosha is not surprising in any way,” said Father Michael Bertram, the pastor of St. Francis of Assisi Parish in nearby Milwaukee, told America. “The discrimination, the racism, the unjust treatment by police is commonplace.”

Father Michael Bertram: “The sad story is that, for many people, particularly African Americans, this incident in Kenosha is not surprising in any way.”

The day after the shooting, Archbishop Jerome E. Listecki of Milwaukee released a statement that “it is not difficult to imagine the pain, fear and anger felt by all who were present. I pray for healing for Jacob Blake and for comfort for his family and loved ones.” He also prayed for peace in Kenosha as “the situation remains volatile in the wake of this shooting.”

Hundreds of people in Kenosha have protested Mr. Blake’s shooting throughout the week; there have also been reports of vandalism, and at least half a dozen buildings have been burned to the ground, including a probation and parole office. On Tuesday night, a number of armed civilians appeared on Kenosha’s streets in what they said was an attempt to protect local businesses.

One vigilante, Kyle Rittenhouse, a white 17-year-old from Antioch, Ill., shot three people with an AR-15-style rifle in what he claimed was self-defense. Two of them have died, and Mr. Rittenhouse has been arrested and charged with first-degree homicide. Before the incident, his social media posts had included the slogan “Blue Lives Matter,” as well as photos in which he posed with guns.

In speaking about the events of the past week, Fessahaye Mebrahtu, director of the Archdiocese of Milwaukee’s Black Catholic and Ethnic Ministries outreach program, noted, “Milwaukee bears the notoriety of being among the top hyper-segregated cities in the U.S., and the shooting of Jacob Black set us back into chaos.”

Archbishop Jerome E. Listecki of Milwaukee: “The sins of violence, injustice, racism and hatred must be purged from our communities with acts of mercy.”

On July 11, the Archdiocese of Milwaukee had organized a Black Catholic March for Racial Justice, part of the larger protests that erupted across the United States in response to the killing of George Floyd by a police officer in Minneapolis.

“I don’t think that we Catholics have a very good understanding of our social justice teachings,” said Father Bertram, who helped organize that march. “There is certainly a need for systemic change. Catholics are oftentimes in the mainstream of American life. That means that they’re often not concerned about some of the social justice issues that the Catholic Church has sponsored for many years. They’re reluctant to get into issues that can be political and can call for change,” especially if coming from those they “politically don’t want to be aligned with.”

On Aug. 27, the U.S. Conference of Catholic Bishops issued a statement in support of racial justice on the eve of the 57th anniversary of Dr. Martin Luther King Jr.’s “I Have A Dream” speech. In the statement, Bishop Shelton J. Fabre of Houma-Thibodaux, the chairman of the U.S.C.C.B.’s Ad Hoc Committee Against Racism, said, “On this Friday’s anniversary, in the midst of our country’s ongoing racial unrest, we restate our commitment to peacefully seeking racial justice. We stand in solidarity with Archbishop Jerome E. Listecki of Milwaukee, which serves the city of Kenosha.”

Despite the archdiocese’s support for racial justice and systemic change, the Catholic response in Kenosha has not been monolithic.

“It’s truly sad and tragic that actions by police officers have been perceived as an injustice,” Father Dwight Campbell, pastor of Mount Carmel and St. Theresa parishes, informed America. “The facts are still being sorted out. [The incident involving Jacob Blake] has resulted in mayhem, violence, destruction of property and loss of human lives. As a Catholic community, we are praying for a return of peace at this time.”

Father Sean Granger, pastor of St. James Parish, said that the city has erected concrete barriers on several streets, including in the area around his church. The parish also boarded up the church to prevent further vandalism; protesters have broken several windows and sprayed graffiti on the church’s facade.

Archbishop Gregory on today’s March on Washington: The church needs to do more for racial justice
Kevin Clarke

Archbishop Listecki went to Kenosha on Thursday morning. After a Mass at St. Mark Church, the archbishop visited several sites in the city where buildings were damaged or destroyed during the protests.

“Violence can never be the means to attain peace and justice,” Archbishop Listecki said in his statement. “The Church stands as a beacon of hope. The sins of violence, injustice, racism and hatred must be purged from our communities with acts of mercy, with the protection and care for the dignity of every human person, with respect for the common good, and with an unwavering pursuit of equality and peace.”

Members of Mr. Blake’s family have called for more demonstrations but asked that they remain peaceful. “If Jacob knew what was going on…the violence and the destruction, he would be very unpleased,” said Julia Jackson, Mr. Blake’s mother, at a news conference on Tuesday. “We need healing.”

Provide feedback on this article
Join the conversation: Login or create an account
Before you can comment, you need to update your profile to include your first and last name, as required in our comments policy. Then reload this page and you'll be set up for commenting. Update your profile
Advertisement
More: Racial Justice / Guns