Archbishop Gregory on today’s March on Washington: The church needs to do more for racial justice 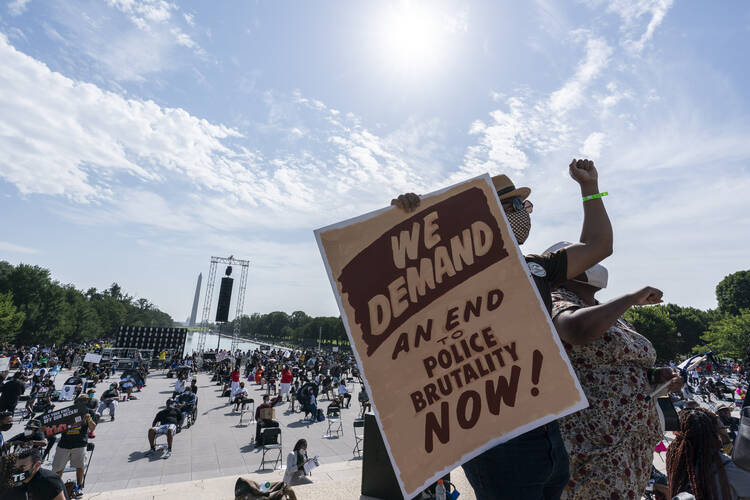 People gather at the Lincoln Memorial in Washington on Aug. 28, the 57th anniversary of the Rev. Martin Luther King Jr.'s "I Have A Dream" speech and the March on Washington. (AP Photo/Alex Brandon)

As events in Kenosha, Wis., riveted the nation this week, the annual commemoration today of the 1963 March on Washington has assumed an added significance. The continuing demonstrations for racial justice and the violence that has accompanied some of them suggest that many of the issues first taken up by the Rev. Martin Luther King and other leaders of the civil rights era remain vexing national challenges.

As a new generation of marchers heads to the nation’s capital today, Archbishop Wilton Gregory of Washington will be celebrating a commemorative Mass this afternoon at the Cathedral of St. Matthew the Apostle. (A live simulcast will be hosted online.)

Archbishop Gregory: “Today’s commemorative is an opportunity for Americans to recommit to the promotion of a just and equitable society and to advance the principles that Dr. King in his famous speech held up for all.”

He recalled that in 1963 the church had a role to play in the first march: Washington Archbishop Patrick O’Boyle (later Cardinal O’Boyle) had invited civil rights leaders to a prayer service before the march began and delivered the invocation at the Lincoln Memorial on that historic day.

“Today’s commemorative event is an opportunity for us as Americans to recommit ourselves to the promotion of a just and equitable society and to try to advance the wonderful principles that Dr. King in his famous speech held up for all of us,” the archbishop said in a conversation this morning with America.

In recent weeks, messages shared by Black Lives Matter demonstrators calling not only for reimagining the role of police departments but also for a comprehensive reflection on structural racism have proved difficult for some white Catholics to hear. Archbishop Gregory pointed out, however, that many others have proved “very much attuned to the value of this moment and the opportunity to reset the narrative and advance the cause of racial justice and harmony.”

“Yes,” he said, “there is some opposition. Archbishop O’Boyle integrated the schools and the parishes in the Archdiocese of Washington the year after he was established as the first residential archbishop [in 1948], and he faced opposition. So it’s not new, it’s regrettable, but it’s not new that some would not see the importance of this moment and take exception to the movements that are afoot right now.”

In the fight against racism, white Christians must break the cycle of distraction
Bill McCormick, S.J.

He thinks the U.S. church has made valuable contributions to efforts to promote racial justice and healing, “but more is always needed.”

“I don’t think we can take our foot off the pedal. We are doing a credible job; we need to do more,” he said. “Different dioceses are engaged in ways that reflect their region, their history, their involvement. More is needed, but I’m grateful for all that has been done and is being done.”

At Mass this afternoon Archbishop Gregory said that he plans to draw from the Gospel reading of the Beatitudes to highlight “some of those virtues that Jesus set before us [that] I think would be most appropriate and most effective in reflecting on and pursuing after the commemorative march is over.”

“As Dr. King laid out before us,” the archbishop added, “this is a process; it’s a marathon for freedom and justice and harmony. It’s not a sprint.”

[Read this next: Father Bryan Massingale: White Catholics need to sit with the discomfort of systemic racism]