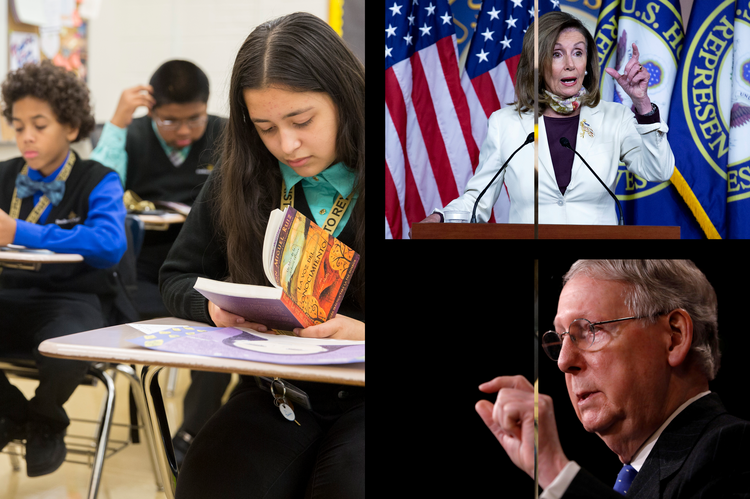 WASHINGTON (CNS) -- Some of the country's most prominent church leaders appealed to congressional negotiators to include financial support for families to continue to send their children to Catholic and non-public schools in a coronavirus relief bill currently being negotiated.

Explaining how the deep economic recession caused by the pandemic since March has "made it impossible for many struggling families to continue paying tuition," five cardinals, an archbishop and a bishop called for the aid in an Aug. 5 letter to Republican and Democratic leadership in the House of Representatives and Senate.

The letter, released Aug. 6, implored for "robust" assistance "to ensure that the education needs of all children are met, including children in Catholic and other nonpublic schools."

The correspondence was the third plea for support in recent weeks by church leaders as Republican and Democratic congressional leadership and the administration were locked in days of negotiations over specific measures in the relief bill.

House Democrats ushered through a bill in May that contained a broad array of relief measures. Called the Health and Economic Recovery Omnibus Emergency Solutions Act, or the HEROES Act, the House bill offers a $3 trillion package, including $58 billion for grades K-12.

The Republican-led Senate July 27 introduced its stimulus package, Health, Economic Assistance, Liability and Schools, or the HEALS Act, totaling about $1 trillion. It includes $70 billion to K-12 schools that open for in-person classes. It would redirect some coronavirus-relief funding to school-choice programs, so families can continue to send, or choose to send, their children to nonpublic schools they feel offer the best education for them.

The latest letter is the most recent attempt by church leaders to convince Congress to support families who choose to send their children to nonpublic schools.

On July 29, Cardinal Dolan, Cardinal O'Malley and Archbishop Gomez made a similar appeal to President Donald Trump and Congress. Their request came in a commentary for the National Catholic Register.

The next day in a letter to Rep. Karen Bass, D-California, chairwoman of the Congressional Black Caucus, the chairmen of three U.S. bishops' committees said that because the pandemic has "disproportionately affected" predominately Black communities and the Catholic schools that serve them, Congress must provide immediate financial help to families who have chosen these schools for their children's education.

The Aug. 5 letter said the recession had forced 140 Catholic schools to permanently close "and hundreds more are in danger of being unable to open in the fall."

"The closure of schools that serve urban areas are disproportionately harmful to low-income and black children served by these schools," the prelates wrote.

They also noted how each student educated in a Catholic or nonpublic school saves local school districts "thousands of dollars."

"The aid is essential for ensuring that Catholic and nonpublic schools that want to open for instruction have the means to do so, because families have the ability to send their children to those schools," the letter said.

The prelates suggested that such aid for families come in the form of emergency tuition scholarships for low-income families. "We believe this is good policy, by providing aid directly to families to support the education that is best suited to the needs of their children," they said.

By supporting children so they can attend nonpublic schools, the letter said, "you will maintain the integrity of those strong communities, while helping sustain the positive legacy of Catholic schools and their benefit to the common good for generations to come."

"Moreover, you will prevent the additional financial burdens on already strained state and local government caused by the sudden enrollment of thousands of students whose Catholic schools had closed," it said.

Read more about how the coronavirus pandemic is affecting the Catholic school system: