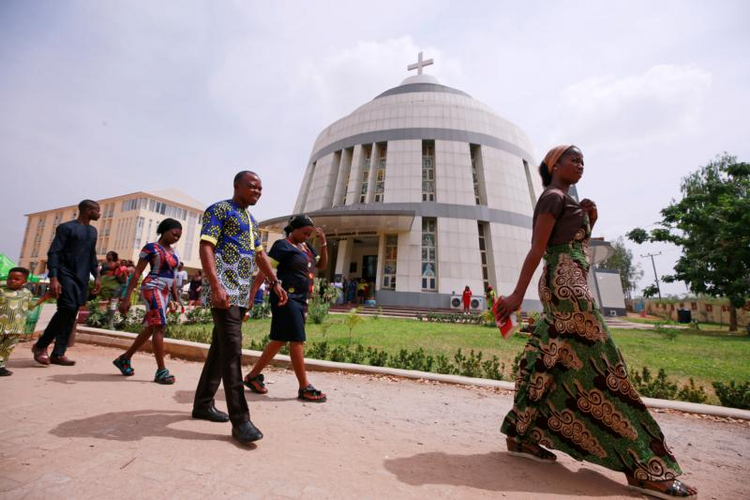 While Christians, particularly preachers, “are clearly the targets” of militants in the West African country, Muslims are killed too, said Archbishop Matthew Ndagoso of Kaduna, who chairs the bishops’ committee on justice, development and peace.

Militants and also bandits act with impunity, he said, noting that all Nigerian civilians feel vulnerable and “let down by the government.”

In its recent report, the U.S.-based International Committee on Nigeria said the United States “needs to send a special envoy for Nigeria and the Lake Chad region, who can coordinate the U.S. response to the crisis.”

Nigeria has suffered more than 10 years of killings, abductions and other abuses by armed Islamist groups. In the hardest-hit northeast region of the country, tens of thousands of people have been killed and about 2 million displaced.

The United Nations said it was “utterly shocked and horrified” after a video surfaced July 22 showing five men kneeling and blindfolded. They were then shot. The men -- three were aid workers -- had been traveling in Borno state when they were kidnapped.

With abductions commonplace along Nigeria’s roads, people are terrified to use them to go about their daily business, Archbishop Ndagoso told Catholic News Service July 29.

In early June, the bishop of Kafanchan had to see to the burial of nine people who had been hacked to death, while “the police were nowhere to be seen,” he said. The killings were among assaults on Christian communities in southern Kaduna state by Fulani militia.

Nigeria has a decades-old cycle of conflict between predominantly Christian farmers and ethnic Fulani herdsmen who are Muslim, partly due to competition for arable land.

President Muhammadu Buhari, a Muslim and a former military ruler, won office in a democratic transfer of power in 2015 and is in his second term. In 2018, Nigeria’s bishops criticized the president’s lack of action against Fulani militia and linked his inaction to his religion.

Perpetrators of terrorist attacks in Nigeria “appear more emboldened as the political will to professionally investigate the crimes and hold perpetrators accountable is grossly lacking,” the ICON report said.

“Victims are being forced to convert to Islam or risk being killed, raped, or subjected to gruesome acts of torture,” it said, noting that 16-year-old Leah Sharibu has yet to be freed. Leah was taken hostage two years ago with more than 100 girls in the town of Dapchi by Boko Haram insurgents. When the others were freed a month later, she was the only one not released -- reportedly because she refused to renounce her Christian faith.

“Instead of taking action to stop the violence, the country’s own government has stood by idly as the blood of innocent Nigerian people has been spilled at the hands of the Islamist terrorists of Boko Haram and Fulani militants,” ICON said.

Boko Haram “targets Christians, other non-Muslims, and even Muslims opposed to their ideologies,” while attacks by Fulani militants “have repeatedly demonstrated a clear intent to target Christians,” it said.

Its report provides data it claims is “evidence that genocide, war crimes and crimes against humanity have been and continue to be committed.”

From 2000 to 2019, “deaths resulting from Fulani militant attacks include 17,284 across Nigeria and 13,079 in predominantly Christian states (Benue, Kaduna, Plateau and Taraba),” the report said.

In June, the U.S. State Department noted that tens of thousands of civilians have been killed in “violent attacks by terrorist groups or criminal gangs, in intercommunal violence, or due to their religious beliefs” and urged the Nigerian government to do more “to address this violence, hold those responsible accountable, and protect civilians.”

Fulani militants “make their homes on land that they occupy after killing people and burning their houses,” he said.

“People feel helpless and frustrated,” the archbishop said. “Government says they are doing their best” to fight corruption, but “if that is so, then their best is not good enough,” he said.

Nigeria has nearly 196 million people, and about 40% live in poverty, according to its statistics office. Nigeria is Africa’s most populous country with its biggest economy.

“Nigeria has an abundance of resources, both human and material,” Archbishop Ndagoso said. But its political leaders are “only interested in amassing wealth for themselves and their families. There’s no interest in the common good,” he said.

“It’s planting season now, but people can’t go out on their fields for fear of being killed and therefore they can’t eat,” the archbishop said. “As the saying goes, a hungry man is an angry man.”