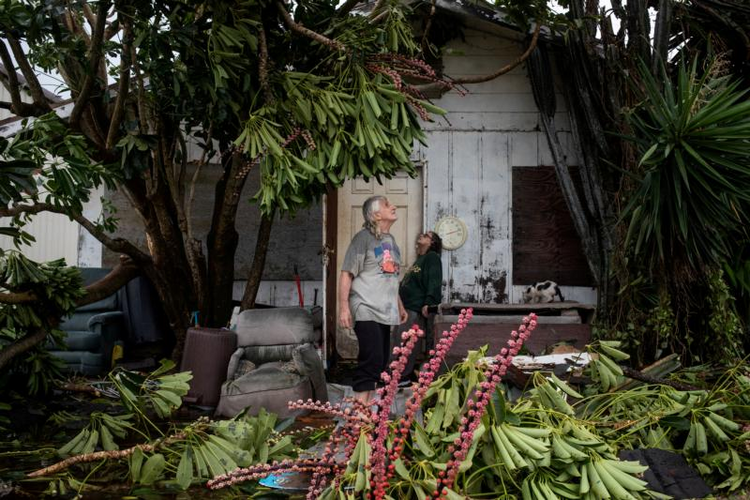 A couple in Port Mansfield, Texas, survey their destroyed home in the aftermath of Hurricane Hanna July 26, 2020. (CNS photo/Adrees Latif)

WASHINGTON (CNS) — Some dioceses in the state of Texas had services affected and some are still trying to determine damage from the July 25 landfall of Hurricane Hanna.

The hurricane hit southern Texas -- a region already battered by the coronavirus -- particularly hard, causing widespread damage, though no casualties were reported, at least in the U.S.

"The Diocese of Corpus Christi is currently evaluating the damages caused by Hurricane Hanna to its parishes and schools," the diocese said in a July 28 news release. "Several parish communities in the diocese experienced varying degrees of damage as a result of Hurricane Hanna."

Disaster teams were evaluating and "assisting with the mitigation and stabilization of affected buildings to prevent further damages and to lessen any possible issue with mold," the diocese said.

Hurricane Hanna is said to have made landfall about 90 miles south of Corpus Christi and later barreled through parts of Mexico, where at least four casualties have been reported. The first Atlantic hurricane of the 2020 season also affected the Rio Grande Valley, where the Diocese of Brownsville, Texas, is located.

"RGV has been severely affected by Hurricane Hanna. Many have lost their homes," said a July 27 tweet by Catholic Charities of the Rio Grande Valley, the charitable arm of the Diocese of Brownsville, as it was seeking donations to respond to the damage.

Though in limited numbers, the Diocese of Brownsville had been able to open facilities for religious services, but some were affected by the weather event.

Brownsville Bishop Daniel E. Flores, in a July 27 interview with Catholic News Service, said the diocese was still receiving reports about damage to properties, but there was general damage to homes, particularly roofs in the area. The diocese was ready to help those affected and used a facility run by the local Catholic Charities, known as the respite center, to shelter those seeking refuge from Hanna.

"The response from people has always been very generous," he said.

But damage was different in various parts of the city. Though there were branches on some streets and flooding in others, he was still able to tend to confirmations for a group of 13 young Catholics at San Felipe de Jesus Parish a day after the hurricane.

Provide feedback on this article
Join the conversation: Login or create an account
Before you can comment, you need to update your profile to include your first and last name, as required in our comments policy. Then reload this page and you'll be set up for commenting. Update your profile
Advertisement
More: US Church