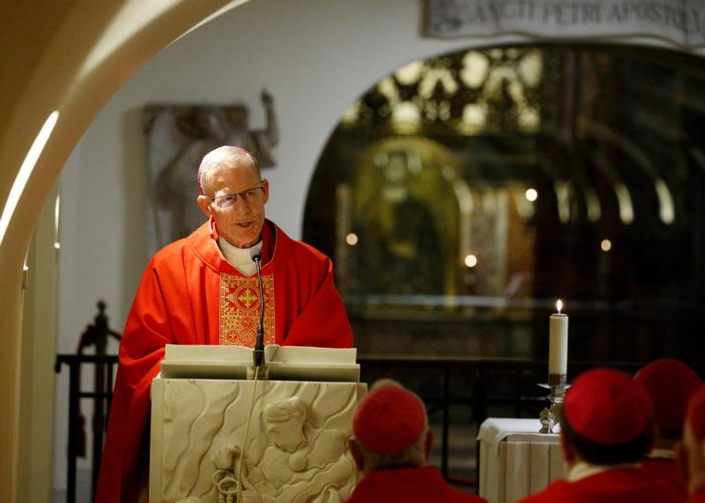 Archbishop John C. Wester of Santa Fe, N.M., gives the homily during Mass in the crypt of St. Peter's Basilica Feb. 10, 2020, while he and other U.S. bishops from the Southwest region made their "ad limina" visits to the Vatican. (CNS photo/Paul Haring)

ALBUQUERQUE, N.M. (CNS) — Next year the Archdiocese of Santa Fe will take over pastoral leadership of a 152-year-old Catholic parish in the heart of downtown Albuquerque that has been run by the Society of Jesus since it was founded.

“There is no doubt that we owe a great debt of gratitude to our Jesuit brothers who have shepherded this parish so well for so long,” Santa Fe Archbishop John C. Wester said in a July 27 statement about Immaculate Conception Parish.

“Therefore, it is with sadness that we receive the news they no longer have the capacity to staff this beloved Catholic community,” he said.

He described Immaculate Conception as “a culturally diverse and vibrant parish” that has benefited from the missionary activity of the Jesuit priests and brothers since its inception in 1868.

The Jesuits came to Albuquerque from Naples, Italy, in 1867 at the invitation of then-Bishop Jean Baptiste Lamy, the first bishop of Santa Fe who later became its archbishop. The French-born prelate was a pioneering churchman in the American Southwest.

“Building on their rich heritage, they brought that fire first ignited by St. Ignatius to our Southwest, reminding us that the first principle of our existence is to be one with God forever in heaven,” Archbishop Wester said.

He said the Santa Fe Archdiocese will miss the Jesuits’ presence very much and will never forget them “and all they have done for us over these many years.”

“Their legacy will live on and we will continue to reap the fruits of their pastoral ministry in our midst,” Archbishop Wester said. “We wish them every success and assure them of our undying love, prayers and support. What they have done for the ‘greater glory of God’ is a tribute to them and to God’s grace working in them and in the people of Immaculate Conception.”

The Jesuits who have staffed the parish are part of their order’s Central and Southern Province, headed by Jesuit Ronald A. Mercier. The religious order will end its administration of the parish in December. The current pastor, Jesuit Father Warren J. Broussard, will remain at the parish until June 30, 2021, “to facilitate the transition to a new pastoral team.”

In a letter and video message to the parish, Father Mercier said Immaculate Conception Parish will always “have a place in our heart.”

In his statement, Archbishop Wester said: “As friends in the Lord, we support one another in our ministries through a common life of worship and prayer, simplicity, spiritual conversation, encouragement, respect and affection. We reflect and plan together with discerning love so that all our present and future endeavors at Immaculate Conception might be done for the greater glory of God.”

Provide feedback on this article
Join the conversation: Login or create an account
Before you can comment, you need to update your profile to include your first and last name, as required in our comments policy. Then reload this page and you'll be set up for commenting. Update your profile
Advertisement
More: Jesuits