Trump, the inspectors general and the precarious state of government accountability 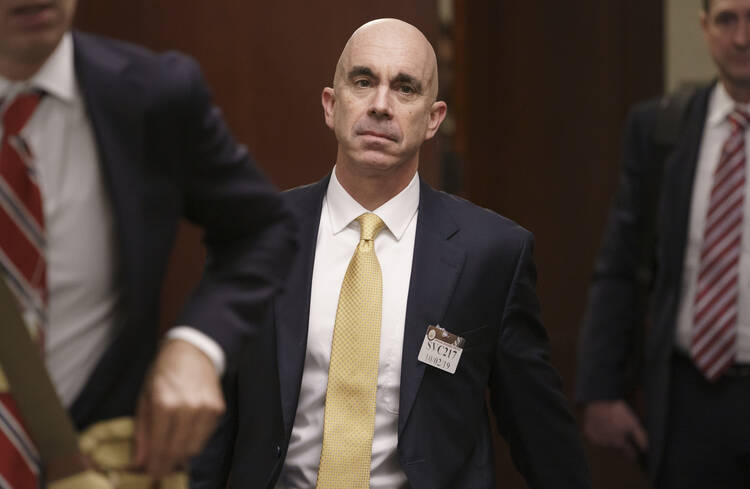 In this Oct. 2, 2019, photo, State Department Inspector General Steve Linick leaves a meeting at the Capitol in Washington. President Trump fired him on May 15. (AP Photo/J. Scott Applewhite/file)

The United States was established as a republic under the rule of law by the consent of the people, not by a divinely appointed authority. The rights of all citizens limit the powers of federal and state governments. Moreover, the branches of governments at all levels are limited to specific functions.

There is an office, integral to the federal government and found in many state and local governments, that is unknown to most citizens. It is usually called the inspector general. The overall concern of inspectors general is to make government agencies and the military more efficient, but in doing their work they may discover waste, fraud and ethics violations, as well as poor record keeping (as in the case of migrant children separated from their families) and hidden information (as in the total costs of the war in Afghanistan). They report these discoveries to the appropriate authorities, including Congress.

The more I learned about the office, the more I realized it was a concrete example of Catholic social teaching and its concerns about a good and well-ordered society.

I was unfamiliar with the idea of an inspector general until I learned about it firsthand in New Orleans after Hurricane Katrina. The city established what is known as the Ethics Review Board, which I chaired for four years. As chair of the review board, I became intimately involved in overseeing the Office of Inspector General for the City of New Orleans. The more I learned about the office, the more I realized it was a concrete example of Catholic social teaching and its concerns about a good and well-ordered society.

But the Trump administration does not like oversight. There are 72 inspectors general in each cabinet-level and many sub-cabinet offices of the executive branch and in agencies like the Small Business Administration, the Import-Export Bank and the C.I.A. This spring, the president removed at least five of them. Steve A. Linick, fired as the inspector general of the State Department, had been investigating complaints that members of the State Department security service were being asked, inappropriately, to get take-out food and fetch the family dog from the dog groomer for the secretary of state’s family. The ax also fell on Christi A. Grimm, the acting inspector general of the Department of Health and Human Services, who had embarrassed the Trump administration with a report on supply shortages and testing delays at hospitals during the coronavirus pandemic.

One of the fired inspectors general had embarrassed the Trump administration with a report on supply shortages during the coronavirus pandemic.

“We have a lot of I.G.s in from the Obama era,” Mr. Trump said on April 7, referring to his firing of Glenn Fine, who had been the acting Pentagon inspector general and had been selected by the head of a council of inspectors general to lead the Pandemic Response Accountability Committee. “And as you know, it’s a presidential decision.” When reporters asked about his firing of Mr. Linick, he replied: “I have the absolute right as president to terminate. I said, ‘Who appointed him?’ and they say, ‘President Obama.’ I said, ‘Look, I’ll terminate him.’”

But Mr. Trump is downplaying how unusual his actions are. Between 2000 and 2020, only one inspector general was fired by a president, though others have resigned: In 2009, Barack Obama removed the inspector general of the Corporation for National Community Service, saying he no longer had “confidence” in him, and that dismissal raised concerns in the Democratic-controlled Congress. Thankfully, there is at least some consistency on Capitol Hill: This June 4, Senator Chuck Grassley, a Republican from Iowa, said he will block the confirmation of two of President Trump’s nominees for federal posts until the White House provides “adequate explanations” for why two of the inspectors general were ousted.

The Inspector General’s Office for the United States was established in 1777, when George Washington appointed Thomas Conway to the position. The office is not an American invention but has a long history in Western nations going back to the time of Napoleon, when it was primarily used to maintain efficiency and prevent corruption in the military. In 1978, in the era of post-Watergate reform, President Jimmy Carter signed a law encouraging the inspectors general to share information and work together, hailing the reform as a partnership between the executive and legislative branches to root out fraud, corruption and waste.

Mr. Trump’s hostility to oversight is alarming because it endangers our society’s diversity and pluralism. Our diversity can cause contention and dispute, particularly when it comes to issues of ethics. But the United States has found a way to live with the strengths of this diversity through its use of public procedures. Rules and laws help to give a diverse society, like the United States, moral boundaries. The role of the inspectors general is to help government agencies to operate within the rules and procedures society has established and to be accountable.

When they do their jobs well, and independently, the inspectors general can help to build trust in the work of their particular department among members of the government, those who deal with government agencies and the public in general. And that is in the interest of the common good.