What innovations do people actually need after the pandemic? Not flying cars. 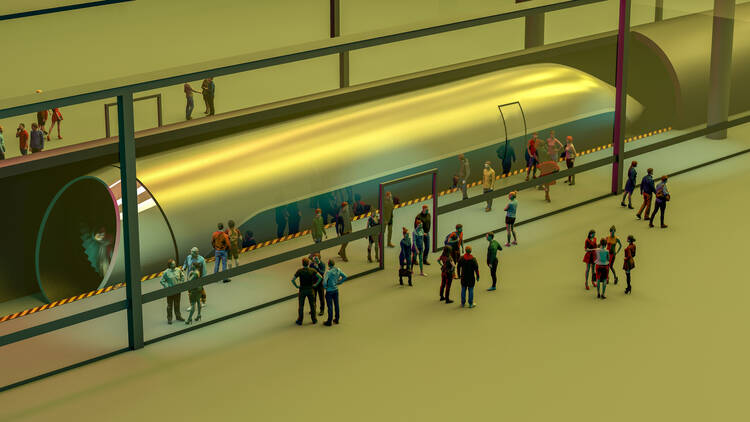 Flying cars, hyperloop trains and other venture capitalist fever dreams are not going to carry us out of our economic mess. (Illustration from iStock/Naeblys)

The flying-car question came back with the coronavirus.

In April, as the U.S. economy veered into a depression, the venture capitalist Marc Andreessen published on his firm’s website an essay titled “It’s Time to Build.” Why can’t we mobilize, he wondered sensibly, the production of on-demand vaccines and protective equipment?

Then he reached back into a rummage sale of favorite Silicon Valley sci-fi, writing about “gleaming skyscrapers,” Elon Musk’s factories (also “gleaming”) “producing every conceivable kind of product,” online tutoring for all and delivery drones. Finally, with telling self-awareness, he asked, “Where are the high speed trains, the soaring monorails, the hyperloops, and yes, the flying cars?” The film “Back to the Future” said we were supposed to have flying cars by now. Who took them away?

It is hard not to feel the allure of flying in a car—it is, after all, socially distant—or any of the achievements Mr. Andreessen longs for. He is entitled to his perspective, of course, and he has a rare perch from which to see, but there are other worthy perches, too. Mr. Andreessen, expecting criticism of his essay, writes, “Instead of attacking my ideas of what to build, conceive your own!” Perhaps the more important difference is not what we build but how we build it.

Enthusiasts of venture capital often forget that its flourishing began with a small change to the law in 1979 that permitted pension funds to start parking the retirement money of working people in risky start-ups. Since then, a lot of basic innovations have still come from public investment—including the internet itself—but venture capitalists have excelled at businesses that eat up entire industries and create relatively few good jobs in the process. Innovation could have been, and still might be, organized differently.

Look at the Great Depression of the 1930s. The country was confounded by the inability or unwillingness among the economic elite to invest in things that people needed to reach their economic—and social and human—potential. Take two examples from that time: Private utility companies had left the vast majority of rural America without electricity, and the banking system had left entire communities without access to basic financial services. There wasn’t much money to be made filling those gaps, so investors sat on their hands.

Mr. Andreessen’s “Time to Build” essay is a plea for society to unshackle his kind—the future seers, the big-betters—and let their visions loose. But it should give us pause that in May the National Bureau of Economic Research published a paper indicating that venture capital tends to retreat in the face of economic shocks. As much as we might appreciate the whimsy of the Andreessens of the world, there is good reason to believe that they will not prove salvific.

The country was confounded by the inability or unwillingness among the economic elite to invest in things that people needed to reach their economic—and social and human—potential.

Consider what did happen in the Great Depression. Congress passed the Federal Credit Union Act in 1934, which insured neighbors who pooled their money to lend each other. Two years later, another law enabled the government to finance farmers who wanted to build their own electric utility cooperatives, which they did in short order. That loan program still serves nearly 900 co-ops, and it is revenue-positive. These business innovations (influenced by New Deal figures like Msgr. John A. Ryan, a priest and economist at the Catholic University of America) were not designed to make money directly. Their job, rather, was to provide member-owners with the means to step up their livelihoods however they wished. You can see why investors were not interested: The profits were externalities.

The New Deal’s cooperative success stories raise questions about the kinds of innovations that our society has neglected, beyond the flying cars—business model innovations that treat workers and consumers with the respect they urgently need. The current economy’s neglect of so many people is as much a market failure as a lack of power lines or home loans. Could filling some of those blind spots be a way out of the current economic mess?

Avoiding a race to the bottom

I often think about what happened when Uber and Lyft briefly abandoned Austin in 2016, when the city required it to adopt safety rules required of taxis. A nonprofit rideshare app appeared, called RideAustin. I have used it, it works, and it takes a comparatively minuscule cut from drivers—though it lost much of its market share when its globalized competitors returned. RideAustin proves you can make a useful app and run it locally with fair treatment of workers. But that is not the business model for venture capitalists, so we get Uber, Instacart and so on. We get a race to the bottom, where companies are competing to provide essential workers as little as they can get away with—and that is not the technology’s fault.

Similarly, now that many of us are working and socializing online, we are confronting anew our dependence on a few tech giants, which are doing who knows what with the data of our lives. I am grateful that, for some years, I have been a member of a small co-op that manages free, open-source software for basics like email, social media, file-sharing and, yes, videoconferencing. The possibility of user-owned, user-governed tech communities is out there, but because it doesn’t help investors mount up returns, they don’t buy in. Without such alternatives, we are stuck with services that we have little reason to trust with our most personal data.

The best venture capital sci-fi could come with the promise of some basic fairness and accountability, but we are not well equipped to innovate that way.

Why did Amazon come along to vanquish local businesses before there was Bookshop or Shopify, which set out to serve smaller shops? Why is it such a predictable story that with every new convenience comes a slew of bottom-of-the-bucket jobs? The best venture capital sci-fi could come with the promise of some basic fairness and accountability, but we are not well equipped to innovate that way. The model is the model. It is good at some things, bad at others.

To start, the age of social distancing is a good time to replicate what the New Deal did for electricity in the realm of broadband—wiring underserved communities, both rural and urban. (Some old electric co-ops are doing just that.) It is worth remembering here how much public investment helped to spur what became Silicon Valley. The United States might follow the lead of European governments, which—in order to escape the U.S. tech giants—have stepped up investments in open-source tools for file-sharing and secure communications. In both cases, the return on investment is a commons available to anyone—including my little server co-op.

We could go much further. Rather than target specific needs with cooperative solutions, as the New Deal did, we could design a recovery based on popular innovation of any sort. Already, since the pandemic struck, the Securities and Exchange Commission has loosened rules to encourage more people to invest in start-ups and community businesses. But imagine if any group of people with a reasonable common cause could access the necessary financing to make it a reality. Perhaps then RideAustin could have held its own against Uber’s return, and my little co-op would be doing better than scraping by. The student of mine who is trying to keep working back home in the rural Midwest could have internet fast enough to keep up with a video call, and the people building flying cars might have jobs safer than those building Teslas.

One example of such collective financing now in operation is the employee stock ownership plan, which enables around 14 million U.S. workers to co-own their workplaces—usually without having to invest a dime upfront. The model was the brainchild of Louis Kelso, a lawyer who worked at a firm that helped build Silicon Valley. He proposed a federal entity to insure banks that lent to the collective projects of undercapitalized people, inviting them to innovate from below. The idea was born of his observation that his rich clients often did not risk their own money either—they borrowed and hedged.

The image we often have of innovation is a white coat in a lab, but what makes technology matter in our lives are the innovations that furnish them with capital and bring them to market. Sure, bring on the drones and the gleaming factories. But make their promise accessible anywhere, on the terms of those who will rely on them, not just where a certain sort of investor sees fit.