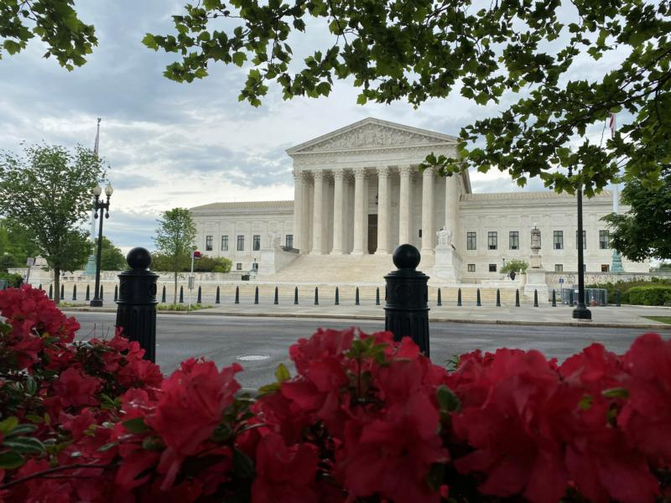 The U.S. Supreme Court is seen in Washington May 3, 2020. The court heard arguments May 11 about fired Catholic school teachers where schools said they have a "ministerial exception" to discrimination laws. (CNS photo/Will Dunham, Reuters)

WASHINGTON (CNS) -- In oral arguments May 11, the Supreme Court examined, and seemed divided about, laws governing church and state in its look at two California Catholic schoolteacher firings where the teachers claimed they had been victims of job discrimination.

The phrase of the day in the oral arguments heard by phone due to coronavirus restrictions, was "ministerial exception" since that's what the schools claim they can use in firings, based on a 2012 Supreme Court decision that said church and religious school employers are exempt from anti-discrimination laws for employees who are ministers of the faith.

In this case, the court is asked to determine if the fired teachers fell under the "ministers" category and were therefore exempt from job discrimination protections.

Determining who is a minister and who isn't seemed to be something both sides were looking for with acknowledgment by the justices that this could prove to be complicated.

As Justice Neil Gorsuch put it: "Struggling with where do you draw the line and how much entanglement both sides are going to get us in here in deciding what's an important enough person in a particular faith and how we avoid that difficulty."

Justice Sonia Sotomayor told the attorney representing the schools that he was "asking for something broader than giving the schools the power to hire or fire certain kinds of people because of how they teach the religion or don't teach it" and said he hadn't "explained why it's necessary."

But Justice Samuel Alito argued that teaching religion "to new generations is critical," even if this is simply part of the overall curriculum taught by elementary school teachers at religious schools.

Jeffrey Fisher, a lawyer representing the teachers, said a broader interpretation of who falls under the "ministers" category could impact football coaches, nurses at Catholic hospitals or summer camp counselors.

At St. James School, former fifth grade teacher, Kristen Biel, said she was fired after informing school administrators that she had breast cancer and would have to take time off for surgery and chemotherapy. She sued under the Americans with Disabilities Act of 1990. Biel died last summer, but her husband is seeking damages. Becket, the nonprofit religious liberty law firm representing the schools, said that in 2015, the school chose not to renew Biel's one-year contract based on classroom performance.

Our Lady of Guadalupe School did not renew the contract in 2013 for Agnes Morrissey-Berru, who had taught both fifth and sixth grades since 1999, saying she had a problem keeping order in her classroom and meeting expectations under a new reading program. Morrissey-Berru sued, alleging age bias under the Age Discrimination in Employment Act of 1967.

In these two cases, federal district courts ruled in favor of the schools, citing ministerial exception. But two separate panels of the U.S. Court of Appeals for the 9th Circuit reversed these decisions, saying the limited extent of the employee's religious duties were insufficient to qualify for a ministerial exception that was more often applied to those with roles of religious leadership.

The 2012 decision these schools are essentially standing on is Hosanna-Tabor Evangelical Lutheran Church and School v. Equal Employment Opportunity Commission, where a teacher at a Lutheran school in Michigan said she was fired for pursuing an employment discrimination claim based on a disability.

In that ruling, the court said the ministerial exception to anti-discrimination laws meant that religious organizations couldn't be sued for firing an employee classified as a minister.

Briefs filed by both schools point out that the "scope of the ministerial exception is a vital and recurring question of nationwide importance for thousands of religious organizations and individuals."

The National Catholic Educational Association, in a friend-of-the-court brief in support of St. James School, stressed instead that Biel, as the school's only fifth grade teacher, "bore particular responsibility for effectuating -- and embodying -- the integral formation that is distinct to Catholic schools."

The group also said the appeals court panel's conclusion was "irreconcilable with four centuries of Catholic educational practice in America."

Justices are likely to agree with the schools in these cases, said Richard Garnett, law professor at Notre Dame Law School and director of the university's Program on Church, State and Society.

Referring to the Hosanna-Tabor case, he said: "Eight years ago, the justices unanimously affirmed that religious institutions, not government officials or secular courts, have the authority to decide who will and will not serve as a minister. They all agreed that secular employment-discrimination law cannot be used to supervise or second-guess what are essentially religious decisions about ministry."

The California school cases, he said, involve teachers in religious schools who are closely involved in the religious education and formation of young students. "The facts that their duties are not limited to theology instruction or that they are not ordained clergy do not matter. It is clear that their role is, and is understood as, a ministerial one, and secular courts are not in a good position to second-guess or override religious institutions' decisions about their ministerial employees' role."

Garnett also said the cases are not, "as some have complained, about a supposed right of churches to 'ignore' civil-rights laws. Quite the contrary. These cases are about protecting the civil and constitutional rights of religious institutions to decide religious questions for themselves."

A decision on this case is expected at the end of June.

Provide feedback on this article
Join the conversation: Login or create an account
Before you can comment, you need to update your profile to include your first and last name, as required in our comments policy. Then reload this page and you'll be set up for commenting. Update your profile
Advertisement
More: Catholic Education / Religious Freedom