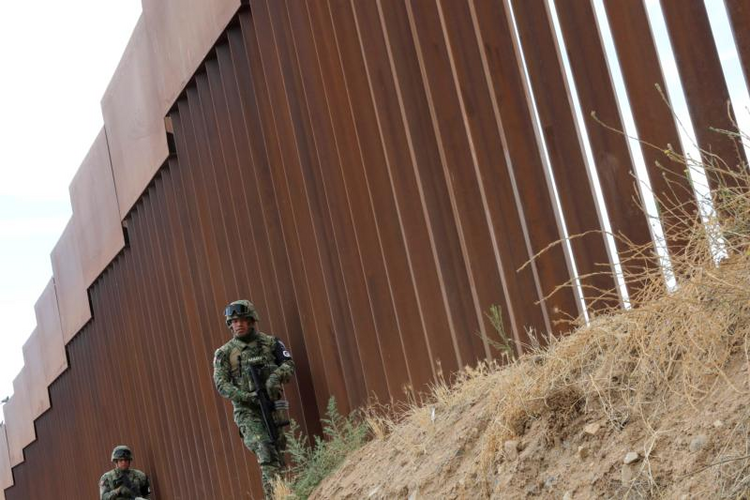 Members of the National Guard patrol next to the border fence between Mexico and U.S. in Tijuana, Mexico, July 23, 2019. (CNS photo/Carlos Jasso, Reuters)

WASHINGTON (CNS) -- A report from the Center for Migration Studies of New York said the population of immigrants living in the United States without documents has declined 10% in eight years.

In 2018, the center said, the total "U.S. undocumented population" was estimated to be 10.6 million, a drop of 1.2 million since 2010. The figures show a steady downward pattern as immigration from Mexico to the U.S. has decreased and Mexican nationals have returned home, the report said.

The document says it shows that "improving social and economic conditions in sending countries would not only reduce pressure at the border but also likely cause a large decline in the undocumented population."

Can the church do more to defend undocumented people?
Jim McDermott

It mirrors the policy position and recommendations of the U.S. Conference of Catholic Bishops, which has said that improving "sustainable and equitable development in sending nations, especially Mexico and the countries of Central America" can help address the root causes of the present immigration crisis in the U.S., "so that migrants can remain in their homelands and support their families in dignity."

The report, based on data collected in the U.S. Census Bureau's American Community Survey, says that when it comes to immigration from Central America, particularly the countries of El Salvador, Guatemala and Honduras, the number of nationals from those countries entering without documentation "has been constant, rather than increasing since 2014," and that an increase in apprehensions of those nationals has not made a difference in the numbers of those who attempt to enter.

The report also shows that two-thirds of the total of those who have entered the country without documentation since 2010 have entered with a temporary visa and simply not returned when they were supposed to, while just one-third "entered illegally across the border."

Despite the decline, nationals from Mexico remain at the top of the list of the top 10 countries with the most number of foreign nationals without documentation in the U.S. followed by El Salvador, India, Guatemala, Honduras, China, Philippines, Dominican Republic, Venezuela and Korea.

Show Comments ()
Comments are automatically closed two weeks after an article's initial publication. See our comments policy for more.
Provide feedback on this article
Join the conversation: Login or create an account
Before you can comment, you need to update your profile to include your first and last name, as required in our comments policy. Then reload this page and you'll be set up for commenting. Update your profile
More: Immigration