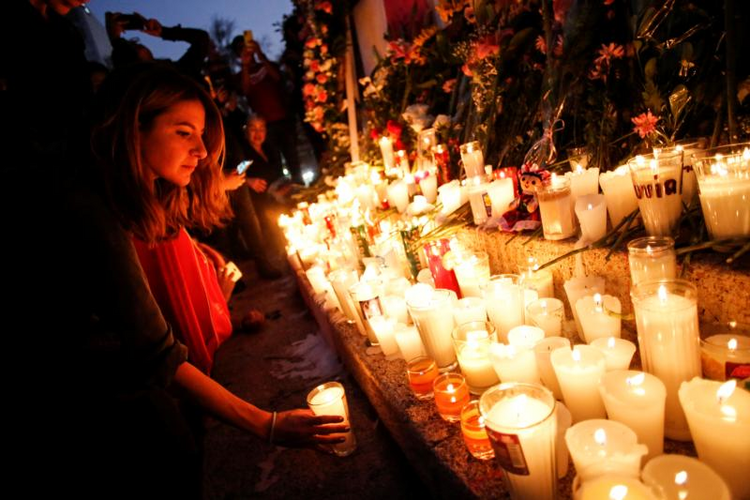 A woman holds a candle as she protests against gender violence and femicide at Angel de la Independencia monument in Mexico City Feb. 22, 2020. Mexico's bishops voiced outrage over a spate of slayings of women and girls. (CNS photo/Gustavo Graf, Reuters)

MEXICO CITY (CNS) -- Mexico's bishops called for action after a spate of slayings of women and girls -- crimes known as femicide -- that have provoked anger and protests, but also highlighted the country's machismo culture and deep-seated problems such as impunity.

In a Feb. 23 statement, the bishops said the crimes "for their brutality have left us perplexed and filled us with pain and sadness."

"In the face of this reality, the bishops of Mexico raise their voices to give words to the pain and all those affected by it. ... We wish to place ourselves, from a place of faith, to offer our presence in words, dialogue and meetings to open ourselves to compassion."

Femicide has occurred with impunity in Mexico for decades, but came to the forefront again with the Feb. 9 murder of a Mexico City woman, Ingrid Escamilla. She was murdered by her husband, and her body was skinned and disemboweled.

The murder of 7-year-old girl named Fatima, who was taken Feb. 11 from outside her school by a stranger and found abused and murdered, added to the outrage.

"This reality makes us confront an authentic educational emergency, because we have lost the basic references of getting along together: truth, kindness and beauty," the bishops said.

Fighting 'Femicide'
From AP, CNS, RNS, Staff and other sources

"We recognize the need for an educative base that implies family life," the bishops' statement said. "We are social actors, and all of us have a responsibility in the mission of forging a culture of hope and peace."

Collectives of feminists have protested in Mexico City, including covering monuments and the National Palace with graffiti. A national strike involving "a day without women" has been called for March 9. Some Catholic universities have provided permission to female students and staff to participate in the protest.

The femicide issue, however, has become politicized.

President Andres Manuel Lopez Obrador and his supporters have described the protests as an attempt to discredit his administration. Speaking Feb. 20, the president proposed "moral regeneration" and "fighting for a better society" as solutions.

He also warned of "conservatives" masquerading as feminists and conveniently showing sudden concern for women's issues.

His predecessors and many state governors from all political stripes have preferred to downplay the issue of femicide, according to analysts, in attempts to keep unflattering news from spreading.

Show Comments ()
Comments are automatically closed two weeks after an article's initial publication. See our comments policy for more.
Provide feedback on this article
Join the conversation: Login or create an account
Before you can comment, you need to update your profile to include your first and last name, as required in our comments policy. Then reload this page and you'll be set up for commenting. Update your profile
Advertisement
More: Mexico