What we owe U.S. veterans who fought in Afghanistan 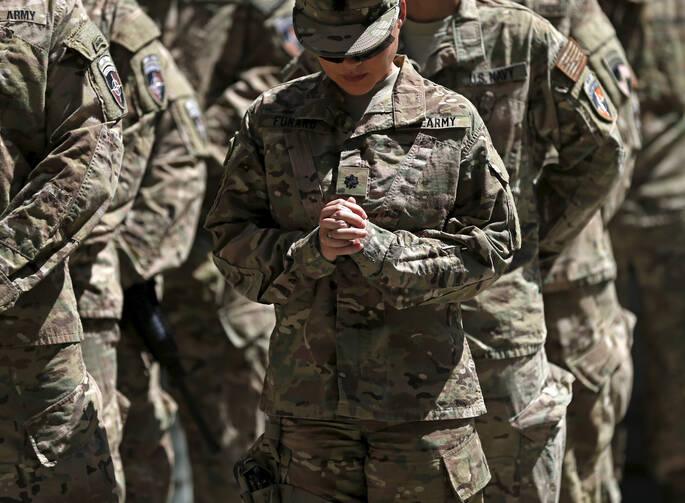 A U.S. soldier prays during a ceremony in Kabul, Afghanistan, Sept. 11, marking the 14th anniversary of the 9/11 attacks on the United States. (CNS photo/Mohammad Ismail, Reuters)

On Feb. 8, 2020, Sgt. First Class Javier Gutierrez, of San Antonio, Tex., and Sgt. First Class Antonio Rodriguez, of Las Cruces, N.M., became the latest U.S. soldiers to die in Afghanistan. They were both 28 years old. Six other American personnel were wounded in the attack, which reportedly came as they were waiting for a helicopter transport in Nangarhar Province. Since the start of the war in 2001, more than 2,300 U.S. troops have died in Afghanistan and more than 20,000 have been wounded.

The war has been far costlier, of course, for Afghan civilians. According to Amnesty International, “in the first nine months of 2019 alone, more than 2,400 children were killed or injured in Afghanistan, making it the deadliest conflict in the world for children.”

You would think that these sobering statistics would keep the war at the forefront of our national consciousness. Instead, most of us hardly think about it. Philip Klay, a former U.S. Marine, described in these pages in 2018 how our mass indifference affected him when he came home from the war in Iraq: “To walk through a city like New York upon return from war, then, felt like witnessing a moral crime.... I was frustrated, coming home, that the American people did not embrace my vision of war.” Mr. Klay went on to explain how his “vision” of the war changed, but I think one could forgive any veteran for feeling what he felt.

It would be easy at this point to do what a thousand other columnists have done and spend the rest of these roughly 900 words castigating you for your indifference. It would be easy, but it would make me a hypocrite. The truth is, I am no different from most Americans. In all probability, if there had never been a U.S. invasion of Afghanistan, the last 18 years of my life would have unfolded pretty much as they did. The war, the horror, the death and devastation have not disrupted my life in any meaningful way.

Yet despite the constant attention we paid to that first gulf war, the reality on the ground was and remains incomprehensible to us. While my friends and I thought we were immersed in reality, we were actually missing it, escaping it.

Which is why things like the exhibit I visited last weekend at the Museum of Modern Art’s satellite in Long Island City are so important. “Theater of Operations: The Gulf Wars 1991-2011” is a large-scale exhibition examining the legacies of those twin conflicts for the people who were most affected by them. It includes more than 300 works by artists based in Iraq and its diaspora. It is gritty, unpleasant, horrifying stuff—worth looking at precisely because it makes you want to look away.

The exhibition about the Persian Gulf war of 1991 also evoked memories of my college dorm room, where I huddled with friends around my black-and-white television set to watch the latest CNN report about Scud missiles, gas masks or burning oil fields. That war was the first major conflict of the 24-hour news cycle. In a time before streaming and smartphones, millions of us watched only war for those several weeks, our stamina fueled by a disturbing mixture of awe and excitement that made us feel alive—but, in retrospect, for all the wrong reasons.

The round-the-clock coverage also made us think we knew what was really happening. Yet despite the constant attention we paid to that first gulf war, the reality on the ground was and remains incomprehensible to us. While my friends and I thought we were immersed in reality, we were actually missing it, escaping it.

Today, reality is even more elusive. Our attention is dispersed across a billion screens and media platforms. We like to say that the digital revolution has made the world a smaller place, that it has annihilated distance. There are ways in which that is true. But technology has also increased the distance between us and those whose lives and livelihoods are literally being annihilated. We can choose to watch something else—and we often do.

Let’s pray. But most of all, let’s pay attention.

The children of Afghanistan do not have that choice. Neither does the family of Sergeant Rodriguez, whose funeral was held in late February in Las Cruces. According to family and friends, Sergeant Rodriguez was an exemplary soldier, citizen and friend. He had deployed multiple times to Afghanistan, according to the El Paso Times: eight times with the 75th Ranger Regiment and twice with the 7th Special Forces Group. He is survived by his wife, Ronaleen, whom he married in April 2017, as well as his parents, two brothers and a sister.

In the meantime, AP reports, “Rodriguez’s funeral comes as the United States and the Taliban, the Islamic fundamentalist group waging war in Afghanistan, have reportedly reached some sort of truce, set to begin within the next few days.”

Let’s hope so. Let’s pray. But most of all, let’s pay attention. We owe at least that much to the children of Afghanistan and to the family of Sergeant Rodriguez.