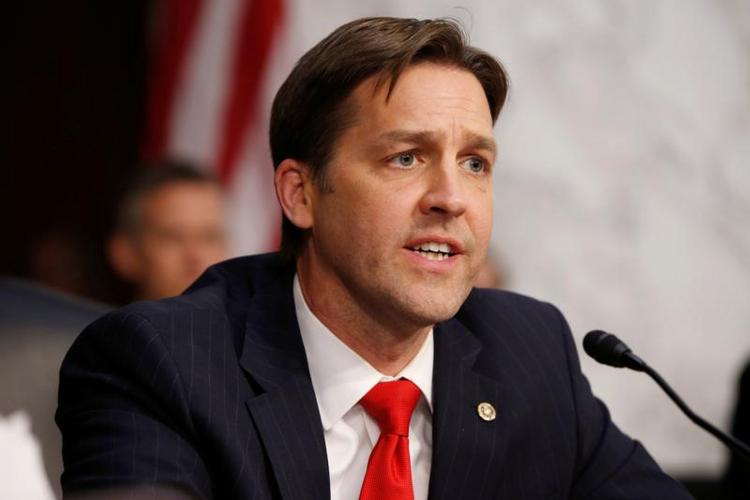 U.S. Sen. Ben Sasse, R-Neb., is the lead co-sponsor of the Born-Alive Abortion Survivors Protection Act, which he has reintroduced for 2020. The Senate Committee on the Judiciary held a hearing Feb. 11, 2020, on the bill that would protect newborns who survive abortions by requiring appropriate care and admission to a hospital. Sasse is pictured in a March 21, 2017, photo. (CNS photo/Joshua Roberts, Reuters)

WASHINGTON (CNS) -- Former nurse Jill Stanek recalls 20 years ago holding "a precious child who had been abandoned to die alone in the hospital's soiled utility room after surviving an abortion."

Today "we are still fighting for the basic care these little ones deserve," she said.

Stanek, who is national campaign chair for the Susan B. Anthony List pro-life organization, made the comments ahead of her testimony at a Feb. 11 hearing on Capitol Hill sponsored by the Senate Committee on the Judiciary on the Born-Alive Abortion Survivors Protection Act.

U.S. Sen. Ben Sasse, R-Neb., is the lead co-sponsor of the measure, which he reintroduced in mid-January. The bill would protect newborns who survive abortions by requiring appropriate care and admission to a hospital.

"As extremists in New York, Virginia, Illinois and other states push to expand abortion on demand through the moment of birth," Stanek said, "abortion survivors desperately need Congress to pass the Born-Alive Abortion Survivors Protection Act, to provide them with legal and medical protections and not leave open the decision whether they live or die."

Other pro-life witnesses who testified included Dr. Robin Pierucci, a clinical neonatologist and associate scholar with the Charlotte Lozier Institute, the research arm of the Susan B. Anthony List, and Patrina Mosely, the director of life, culture and women's advocacy at the Family Research Council.

In an opening statement at the hearing, titled "The Infant Patient: Ensuring Appropriate Medical Care for Children Born Alive," Sasse said the hearing was not "about limiting access to abortion."

"This hearing is about making sure that every newborn baby has a fighting chance -- whether she’s born in a labor and delivery ward or whether she's born in an abortion clinic," he continued. "That’s what the Born-Alive Abortion Survivors Protection act does. That's all it does."

Sasse noted that in 2002, Republicans and Democrats worked together to ensure that children born alive are recognized as persons under federal law. "But, unfortunately, federal law does not criminalize the denial of care to babies who survive an abortion."

The senator is hoping for bipartisan support of the newly reintroduced measure. When it came up for a vote in the Senate a year ago, three Senate Democrats supported it, but the final 53-44 tally on the bill fell short of the 60 votes required to break filibusters and advance the legislation.

On Feb. 13, Senate Majority Leader Mitch McConnell, R-Kentucky, filed for cloture on the Born-Alive Abortion Survivors Protection Act and a second pro-life measure, the Pain-Capable Unborn Child Protection Act, which bans abortion nationwide after 20 weeks of pregnancy on the basis the fetus is capable of feeling pain during an abortion at that stage of development.

The Pain-Capable measure contains exceptions to save the life of the mother or if a woman is pregnant due to rape or incest.

Cloture ends a debate and sets the stage for consecutive votes on the two measures later in February.

Show Comments ()
Comments are automatically closed two weeks after an article's initial publication. See our comments policy for more.
Provide feedback on this article
Join the conversation: Login or create an account
Before you can comment, you need to update your profile to include your first and last name, as required in our comments policy. Then reload this page and you'll be set up for commenting. Update your profile
Advertisement
More: Abortion