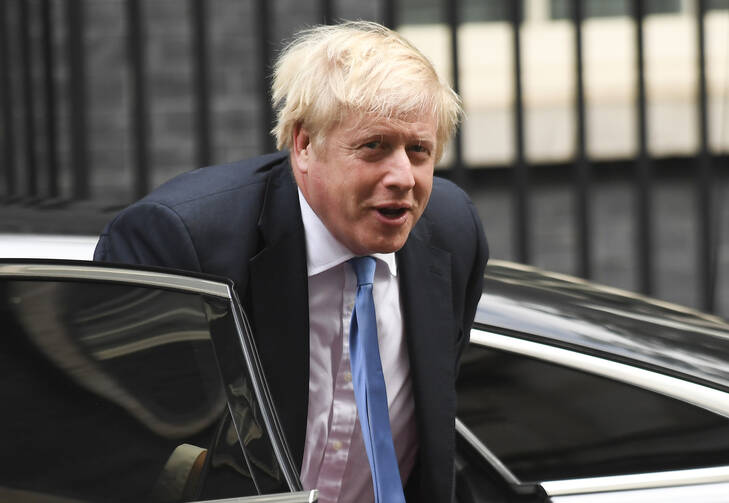 In Utopia, Thomas More held that “personal prejudice and financial greed are the two great evils that threaten courts of law, and once they get the upper hand they immediately hamstring society, by denying all justice.” On Sept. 24, an hour after the United Kingdom’s Supreme Court handed down what may be the most momentous ruling in the country’s history, a single magnesium-bright flash of lightning, followed by a mighty thunderclap and a downpour, burst over London. It was as if the elements wanted, More-like, to warn us not to “threaten courts of law” by impugning their objectivity.

The highest court in the land ruled unanimously and unambiguously that Prime Minister Boris Johnson acted unlawfully in attempting to suspend Parliament only weeks before Brexit, the withdrawal of Great Britain from the European Union, is set to take effect.

In agreeing with a previous ruling of the Scottish Court of Session, the 11-member court has inflicted considerable damage to the Johnson government’s Brexit strategy, though it did not hand down a judgment on Brexit itself. The Supreme Court asserted that it has the power to intervene when Parliamentary sovereignty is undermined, and it ruled that the prime minister had done precisely that when he ordered the prorogation, a temporary suspension, of Parliament. The justices ordered that Parliament must be allowed to meet and hold the government to account on Brexit.

The highest court in the land ruled unanimously and unambiguously that Prime Minister Boris Johnson acted unlawfully in attempting to suspend Parliament only weeks before Brexit is set to take effect.

The spoken summary of the ruling by Lady Hale, the president of the Supreme Court, was a masterpiece of clarity, delivered in jargon-free language in just under 14 minutes: “The Court is bound to conclude...that the decision to advise Her Majesty to prorogue parliament was unlawful.”

With these plain words, the game was up for Mr. Johnson. He had tried to argue that a five-week suspension was necessary and also entirely unconnected to his efforts to push through a potentially disastrous “no deal” departure from the European Union on Halloween.

Within two hours of the ruling, the speaker of the House of Commons, John Bercow, announced that Parliament would sit the next day. He declared that the Commons record would be altered to “expunge” mention of prorogation, recording instead an adjournment. But there was disappointment for fans of the high drama (or perhaps farce) that is the weekly Prime Minister’s Questions, as Mr. Bercow announced that it could not be convened in time.

You might have thought that in a stable and functioning parliamentary democracy, a leader who had just been found by the land’s highest court to have acted unlawfully would express a touch of contrition, if not offer to resign. But no. Far from home at the United Nations in New York, Mr. Johnson’s first instinct was to attack the justices and their decision.

Retreating to populist tropes, the prime minister placed the ruling among the actions of those who wished to “frustrate Brexit.” At his news conference in Manhattan, he said that while he respected the British Justiciary, he “strongly disagreed” with the ruling. Mr. Johnson complained that his Brexit plans were “not made much easier by this kind of stuff in Parliament or in the courts.”

His blustering whinge could hardly have contrasted more with Lady Hale’s exact and measured statement. His claim that the prorogation was not intended to deny parliamentary scrutiny of the final push toward leaving the European Union was replaced by assertions that the courts were frustrating the will of the people who voted for Brexit in 2016.

Mr. Johnson’s appraisal was repeated by others. Brexit Party M.P. Annunziata Rees-Mogg asked on Twitter if anyone knew “how many of the Supreme Court judges voted Leave.” Another M.P. suggested that many of the justices were in the pay of the European Union.

Other rabble-rousing attacks on the court followed. Brexit supporters’ often-proclaimed slogan has been that the exit from the European Union was about “taking back control.” They wanted British laws made by British courts—now that they have it, they apparently do not like it.

But the court’s intervention is not new. The judiciary can and does review executive or legislative actions to evaluate their lawfulness. A court that has judicial review competence, usually a high court, may even invalidate laws and acts of government.

The ramifications of this landmark judgment are too great to be appreciated all at once; they will likely emerge over many years. The ruling will shape the democratic procedures of the British state, no matter what that state looks like or how many nations it still comprises once the Brexit drama has stilled, if ever it does. Already there is renewed conversation about the usefulness of the unwritten Constitution of the British state, which hitherto has relied on precedent and custom.

Recriminations against the court continue on social media, and Jolyon Maugham Q.C., one of the barristers who first raised the legal challenge on prorogation in Scottish courts, has received death threats and been advised to acquire a stab-proof vest. For now, we must recognize that there is a Brexit cult willing to target anyone who shows principled resistance. We need St. Thomas More’s gentle wisdom, courage and humanism more than ever. As autumn days shorten, things are getting darker by the minute.

It is time for the Queen to follow the actual constitution. Off with his head! As a Plantagenet heir, I am only slightly joking about the latter. Acting before Scotland and Wales vote to stay in the EU is essential. No monarch should let the realm be dismembered.

Delighted as he appears to be with the judicial drubbing PM Johnson has received, Fr. Stewart seems unwilling to confront the stark reality that there was a nation-wide referendum the result of which, like it or not, is that Britain has to get the heck out of the EU, and it has to happen very soon. Johnson’s shenanigans with Parliament are almost beside the point. To ignore the result of the referendum would destroy the Constitution.

"......the usefulness of the unwritten Constitution of the British state, which hitherto has relied on precedent and custom."---c'mon Mr Stewart--precedent and custom (or case law precedent as we might call it in the USA) belongs to English law, which is quite different from Scots Law which is a more interpretative law--like the Napoleonic code in France, and quite distinct from English law. Hence its ability to render not a British verdict on Boris, but a Scottish one!

Hey Fr. Stewart
The hoi polis decided to abandon moules and frites a la Bruxelles and their masters in the City fear a shortage of Chassagne Montrachet. It speaks for itself.
And with regard to Scotland, a net welfare recipient from England....as they say in the Bronx, don't let the door hit ya in the ....